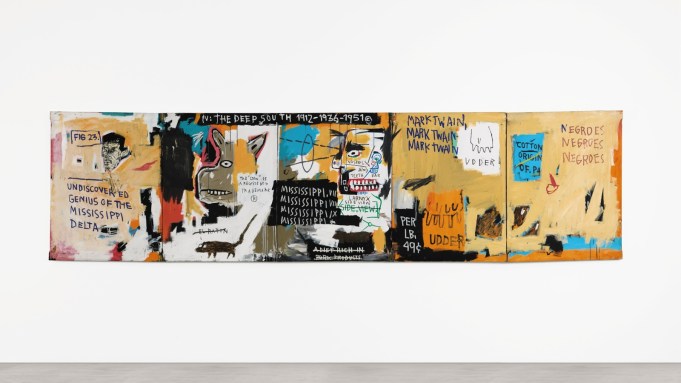 With 79 lots, the two-hour sale had been estimated to total between $337 million and $474 million (calculated without the fees that are included in the total). Last year’s sale tallied $294 million. Of 79 works offered, 12 failed to find buyers. Half the sold lots exceeded their high estimates.

The sale could hardly help but feel anticlimactic, following a record-setting contemporary art sale at Christie’s New York last night, which racked up $745 million, the highest total achieved at any auction.

Leading off Sotheby’s sale was a group of 19 works from New York collector Adam Sender, who this year closed his hedge fund, Exis Capital Management. All sold, for a total of $44.6 million against an estimate of up to $29.9 million. The group included Barney, Urs Fischer, Flavin, Glenn Ligon, Sarah Lucas, Chris Ofili, Richard Prince, Cindy Sherman and Lucien Smith. Highest among these sales was a Kippenberger canvas for $5.5 million, above its $4-million high estimate. (All 19 works were guaranteed by the house to sell at an undisclosed price.) Sender is selling more of his collection via Sotheby’s over the coming 18 months. The total Sender haul is expected to bring as much as $80 million.

“The Sender material is fantastic, and the market reflected that,” New York dealer Barbara Gladstone said on her way out, partway through the sale. Some of the Sender lots on offer tonight came from Gladstone’s gallery. “I was happy all along. All my children did very well.”

“It was a strong sale,” Schwartzman told A.i.A. “It’s all about estimating. Things that were properly estimated did as they should.”

Sounding a rather surreal note, the evening began with a short modern dance performance by four members of the Paul Taylor Dance Company, on a small dance floor installed for the occasion next to the auctioneer’s rostrum, in front of the hundreds of bidders waiting to wave their paddles. The three men wore leotards; a female dancer wore a green dress. Two Robert Rauschenberg works were being sold to benefit the company. Gasps were heard as two of the dancers came close to an Yves Klein relief sculpture hanging near the rostrum, but the work was untouched.

Just over half of the works on offer were guaranteed to sell, by the auction house or by irrevocable bids from third parties. “Auctions are behaving more and more like private sales on a public scale,” Schwartzman told A.i.A. before the sale. “Sellers want to see money up front. The auction houses have had to pay up. That’s the reality of today.”

Top priced lots came from the predictable trio of Warhol, Richter and Koons.

Fetching $30 million from an anonymous phone bidder to become the night’s top sale was Andy Warhol’s painting Six Self-Portraits (1986). Sotheby’s department co-heads Alex Rotter and Cheyenne Westphal battled it out for clients bidding by phone, with Westphal winning the contest. Off the market since it was bought from London’s Anthony d’Offay Gallery the year it was made, it had been estimated at up to $35 million. The half-dozen canvases, each about 2 feet square, set Warhol’s face in various hues, topped by a fright wig, against a black ground.

The evening’s number-two sale at $29 million was Blue, a squeegee painting by Gerhard Richter from 1988 that went to an anonymous phone bidder via Sotheby’s Alex Branczik, besting real estate developer Aby Rosen, who bid from the sales floor. It was offered at $25 to $35 million; the same canvas brought $2.2 million at Sotheby’s New York in November 2002. Dominated by a swoosh of aqua blue, the 10-foot-square canvas also features a variety of yellows, oranges, greens and red.

Casino and hotel magnate Steve Wynn scored the night’s third-highest lot at $28 million, Jeff Koons’s 6½-foot-high stainless steel Jeff Koons Popeye (2009-11). Just three years old, the work was tagged at $25 million and depicts the cartoon mariner with the pumped-up arms and a can of spinach. Wynn will display the work at his luxury hotel in Las Vegas, Sotheby’s announced.

Topping its $20 million estimate to go for $24 million was Jean-Michel Basquiat’s Undiscovered Genius of the Mississippi Delta (1983), a 15-foot-wide canvas from an unnamed seller. The work sold for $294,000 at Sotheby’s New York in November 1994. Over a gestural ground of orange, sherbet, black and blue appear the title words as well as the repeated text “Mark Twain,” “Mississippi” and “Negroes,” along with set of cow’s udders.

“He always said ‘the art world is milking me,'” noted Rotter in a phone call before the sale.

There were some notable failures.

An untitled Willem de Kooning abstract canvas from 1975-77, dominated by pinks, yellows, red and white, was expected to fetch as much as $25 million but failed to sell.

Spring auction season ends with Thursday’s sale of contemporary art at Phillips New York, which is estimated to bring up to $185 million.