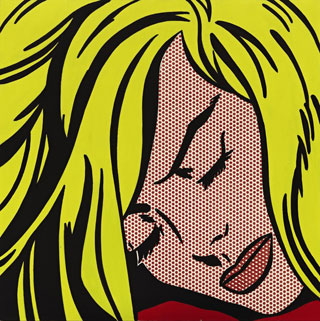 A trio of contemporary masters led Sotheby’s contemporary art auction last night in New York. A Roy Lichtenstein canvas of a dozing blond, selling for $44.9 million, set an artist record, as did works by Cy Twombly, Glenn Ligon and Mark Bradford. The sale was a solid performance, totaling $266.6 million, straight down the middle of the house’s estimated take, with 80% of the offerings finding buyers. The same sale last year brought $128 million. Christie’s Tuesday night sale totaled $388.5 million, setting a record for any contemporary art auction.

“The market is super-strong for top works,” New York art advisor Allan Schwartzman told A.i.A. “If they’re the highest-quality works of significant date by the most important artists, there doesn’t seem to be much of a ceiling on the bidding. It was stunning how, particularly at Christie’s, on the top lots—of which there were many—there was deep bidding at the highest price levels.”

Some say shaky financial markets are driving the run-up in art prices.

“The market is flooded with money,” New York dealer Richard Feigen told A.i.A. “There is a huge amount of liquidity out there that is unsure about currencies, unsure about the equities market, gold and debt securities, and is looking for a home considered to be safe.”

Last night, the Lichtenstein canvas and a painting by Francis Bacon were tied for the top sale of the evening.

Bacon’s Figure Writing Reflected in Mirror (1977) also sold for $44.9 million, just above its estimate. A handful of competitors lost out to an unnamed phone bidder. Featured in a poster promoting a 1977 exhibition at Paris’s Galerie Claude Bernard, the work was acquired by the seller straight from the show, and had been off the market ever since. The nearly nude man pictured is thought to be Bacon’s lover, George Dyer, who had died from an alcohol and drug overdose six years before.

The Lichtenstein, Sleeping Girl (1964), which shows a comic-book blond with down-turned face, sold for just over the artist’s previous record of $43.2 million. A half-dozen bidders were bested by a client bidding by phone via Sotheby’s Lisa Dennison, the former Guggenheim Museum director.

The painting came from the Los Angeles collection of Philip and Beatrice Gersh, of Hollywood’s Gersh Agency, who bought the work from Ferus Gallery the year it was made. In the sale catalogue, Ferus cofounder Irving Blum says that as he pulled Sleeping Girl out of the shipping crate in which it had arrived, “like a vision, Bea Gersh was standing at the doorway.”

Feigen was skeptical about the Lichtenstein’s value.

“There’s a debate about whether Roy is really a great master,” he said. “Apart from that, this is a minor picture. But because major works are unavailable, minor things go to high price levels.” A Lichtenstein retrospective opens this month at the Art Institute of Chicago and travels to the National Gallery of Art, Washington, D.C. and Tate Modern, London.

Another of the night’s top offerings had, like the Lichtenstein, originated in New York and passed through L.A.’s Ferus Gallery. Andy Warhol’s Double Elvis [Ferus Type], shown there in 1963, brought $37 million to become the evening’s third-priciest lot. The work was based on a poster promoting the 1960 Western Flaming Star, showing the sultry singer pointing a gun at the viewer against a silver background. It sold within Sotheby’s estimate.

Inflation in the modern and contemporary markets, Feigen observed, means there are deals to be had elsewhere:

“Old masters are grossly undervalued. I know of at least five trendy artists who are buying old masters. They’re turning dross into gold.”

The May evening contemporary auctions conclude tonight with Phillips de Pury, with works by Basquiat, de Kooning, Warhol and others.