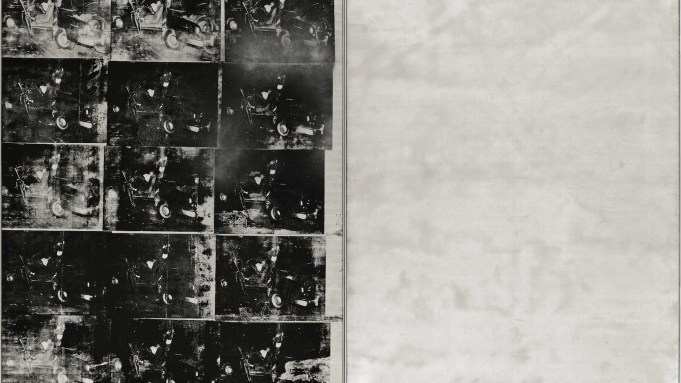 Sotheby’s New York achieved its highest auction total ever last night, selling $380.6 million worth of postwar and contemporary art, led by a $105.4 million Warhol. Its previous high was $375.1 million, set a year ago. Along the way, auction records were set for seven artists, including Andy Warhol, Cy Twombly, Brice Marden, Mark Bradford and the Bruce High Quality Foundation. The total was just below the house’s high estimate of $394.1 million. Only seven of 61 lots failed to find buyers, for an impressive sell-through rate of 88.5 percent.

All the same, Sotheby’s had a tough act to follow; Christie’s sold $691.6 million the night before, setting a new record for any auction.

“There were a few exciting moments,” New York dealer David Nash, of Mitchell-Innes & Nash, told A.i.A., leaving the sales room. “But the sum of it was a little tougher going than last night. It went well, for what it was.”

“Last night you had a wild exuberance,” Miami collector Don Rubell told A.i.A. before the sale’s end. “This was a very professional sale.”

Andy Warhol’s Silver Car Crash (Double Disaster), 1963, a 13-foot-wide, two-panel painting, fetched $105.4 million, far above its $80 million high estimate, to set an auction record for the artist. The left panel shows 15 silkscreens of a car crash that become darker from top to bottom; the right panel is pure silver. It is one of a group of four “double disaster” canvases; the other three are in museum collections, including one in New York’s Museum of Modern Art. The painting had been in the holdings of collectors including Gian Enzo Sperone, Charles Saatchi and Thomas Amman; it was off the market since 1989. An unnamed telephone bidder purchased the painting via Sotheby’s specialist Charlie Moffett.

“It sold beyond my expectations,” New York dealer Christophe Van de Weghe told A.i.A. by phone after the sale, “but I don’t think a painting like this has ever come up at auction.”

Off the market since 1980, the work features gobs of white house paint with scribblings in pencil and crayon. It was one of a group of works being sold by the Dia Art Foundation to establish an acquisitions fund. (Dia director Philippe Vergne looked on from a skybox.)

“I remember when we were shocked that works on paper were selling for half a million dollars,” New York art advisor Wendy Cromwell told A.i.A. by phone after the sale. “There’s no longer the same kind of snobbery about the support the work is executed on.”

In all, the 12 Dia works brought $38.4 million. Fifteen more pieces from the Dia collection are on offer during Sotheby’s day sale Thursday; presale estimates for the 27 examples were in the region of $20 million.

The number two sale of the evening, a Gerhard Richter canvas that went for $26.5 million, also had a notable provenance, coming from the collection of billionaire trader Steven A. Cohen. Another from the trader’s holdings was Warhol’s 1963 Liz #1 (Early Colored Liz), one of Warhol’s trademark images of Elizabeth Taylor. It fetched just $20.3 million, its low estimate, from an unnamed buyer.