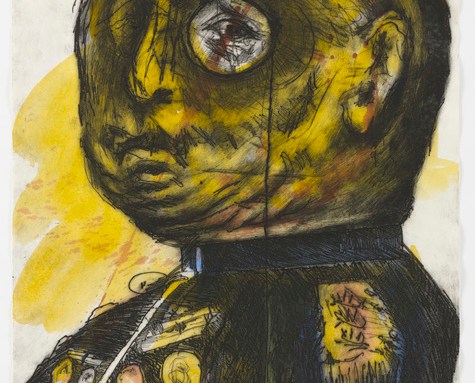 “At times it seemed most everyone I met in South Africa had made or bought a print,” said Judy Hecker, assistant curator in the Department of Prints and Illustrated Books at New York’s Museum of Modern Art. Hecker has organized the exhibition “Impressions from South Africa: 1965 to Now,” on view at the museum through Aug. 14. “Prints are an essential part of the cultural fabric there, in a way that they aren’t here.”

During the half-century of apartheid (1948–94), even during the hardcore repression beginning in 1960s that stifled free expression, prints with political content were being made all over South Africa by artists of diverse backgrounds. Portable, readily multiplied and disseminated, and often involving networks of artists and producers, they escaped the kind of scrutiny directed at more monumental, attention-grabbing art forms. They were also effective tools of resistance, used to organize and incite.

The exhibition includes nearly 100 prints, posters, books and wall stencils by some 30 artists and collectives. It includes examples by William Kentridge, an avid printmaker, as well as the late Robert Hodgins (1920–2010), the collective BitterKomix and—a surprise in screenprint—the photographer Zwelethu Mthethwa. But many names will be unfamiliar to viewers from outside South Africa. Within the country, such figures as John Muafangejo, who worked at the radical workshop and school at Rorke’s Drift in KwazuluNatal in the early 1970s, are much revered. So is his colleague Azaria Mbatha (b. 1941). One of two Mbatha prints, a black-and-white linocut donated to MoMA in 1967—its first South African print acquisition—is typical of the Rorke’s Drift iconography in fusing Christian and indigenous themes.

Black-and-white linocut, with its dramatic contrasts of light and dark, are among the most vivid prints on view. They were popular throughout the period covered and are generously represented in the show. In a recent example, the sculptor and filmmaker Vuyile C. Voyiya’s “Black and Blue” series (2005) shows a dynamic male nude twisting in space, lit up in the darkness by stippling. “It references some earlier work by Voyiya about a man moving around to avoid the police,” said Hecker. Born in 1961, Voyiya “bridges the apartheid and post-apartheid eras.”

There are some lyrical, less obviously incendiary images in the prints on view—for example, Claudette Schreuders’s enigmatic figures in a group of lithographs from 2003 based on her wooden sculptures. But a good deal of the imagery is quite harrowing: Jo Ratcliffe’s snarling dogs in a dump, done in photolithography and screenprint (Nadir 15, 1987–88), which allude to the terrors of the time; or Diane Victor’s ongoing intaglio series “Disasters of Peace” (begun in 2001), with its nightmarish, somewhat surreal scenes of trials, domestic life, hospitals and other vignettes that argue that all is not rosy in post-apartheid South Africa. The series evokes Goya and Dix in more than title alone.

MoMA began collecting South African prints in earnest in 2005, after Hecker made her first trip there, and this exhibition offers just a sampling of the many works acquired since. The department already owned important examples by William Kentridge, an avid printmaker, which the museum began purchasing in the mid-1990s. Kentridge is represented here by, among other works, his Beckmann-esque General, an ominous, ultra-decorated official leveling a baleful stare, from 1993. “I could see there was so much quality artistic activity there besides Kentridge,” said Hecker. “I went in 2004, which was a fantastic year to go, because it was 10 years after the end of apartheid and the Nelson Mandela election. I went to public and private workshops, covering all strata of printmaking, from high-end to university presses and community-based initiatives in urban and rural areas. It was Art History 101 for the new South Africa.”