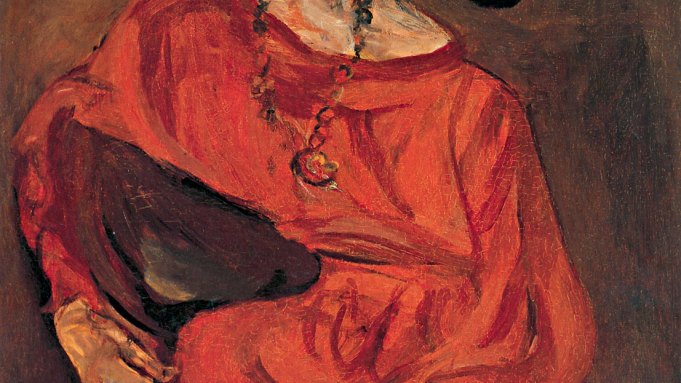 Proving that Gagosian Galley doesn’t have a monopoly on museum-quality gallery exhibitions in New York, Helly Nahmad Gallery is currently presenting a striking show of works by Chaim Soutine and Francis Bacon, on view through June 18. Eighteen paintings by Soutine and 14 by Bacon, including some major examples on loan from private and public collections, afford an unusual opportunity to compare and contrast the painterly bravura that characterizes the work of each of these modern mavericks.

Cocurated by Maurice Tuchman and Esti Dunow, who also contributed texts and a helpful chronology to the show’s fully illustrated catalogue, the exhibition contains well-known works, such as Soutine’s Flayed Beef (ca. 1925) and Bacon’s Lying Figure (1969), familiar self-portraits by both artists, plus rarely exhibited curiosities, including Soutine’s Portrait of the Sculptor Oscar Mietschaninoff (1923-24) and Bacon’s Untitled (Study for Dog), ca. 1960.

While the two artists never met, Soutine’s work had a sizable influence on Bacon after the younger painter’s first stay in Paris in 1927, when Soutine’s eccentricities, such as having an assistant pour buckets of blood over the rotting carcasses he painted, was already the stuff of legend. Both artists struggled to convey a sense of the raw, visceral power of painting and had a deep reverence for art historical precedents like Rembrandt and Chardin.

The exhibition makes their esthetic relationship clear, but it also highlights some notable differences. Unlike Soutine, Bacon most often worked from photographs, and his work frequently has a kind of calculated austerity and a self-consciousness in terms of design—in pieces such as Seated Figure of 1960 and Triptych (Left Panel) of 1981–82—that contrast markedly with Soutine’s more convulsive, angst-ridden works—Praying Man (ca. 1921) and The Butcher’s Stall (1919). Surprisingly, their like-mindedness comes across most potently in the landscapes, a genre Bacon abandoned rather early on in his career. His large Figure in a Mountain Landscape (1956), for instance, has a manic and hallucinatory quality that is closely attuned to Soutine’s dizzying landscape, Group of Trees (ca. 1922). On this point, and in a wide range of other concerns, “Soutine/Bacon” sparks a wide-ranging discourse between two modern masters that is as relevant as ever to contemporary painting.