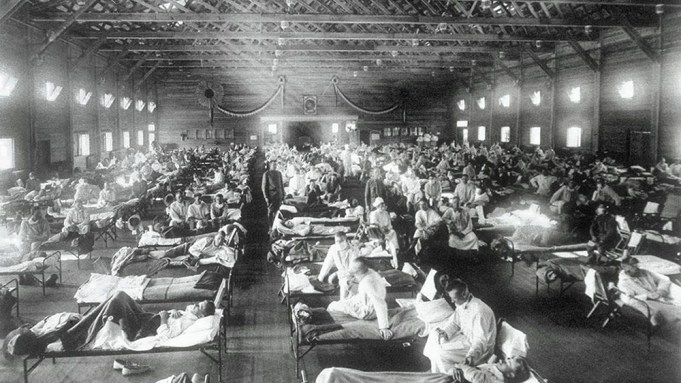 For all the notable figures killed by the pandemic of 1918–19, including Schiele and Guillaume Apollinaire, as well as all those who were stricken but survived, such as Munch and Georgia O’Keeffe, the artistic community largely eschewed addressing the phenomenon itself. The most notable exception is Alfred Kubin, the Austrian Symbolist who depicted pandemic generally, and Spanish flu specifically, in allegorical terms on several occasions. In Cholera (1898–99), the titular disease is imagined as an enormous demon-like serpent or slug form, sliding alongside a non-European (and thus “primitive”) village while terrified villagers and animals flee. In Epidemie (ca. 1900–01), a pestilence is portrayed as a large skeleton leaning ominously over a small and isolated country home and infecting it with the deadly contents of a sack. Around 1918–20, Kubin created an image that has been identified either as Schnitter Tod (Grim Reaper) or as Die Spanische Krankheit (The Spanish Sickness), an ink drawing of a skeleton holding a scythe beside a pile of disfigured bodies.22 Clouds swirl, and a bolt of lightning shoots down from the sky. The scene dwarfs a small village in the background, which is helpless in the face of the hostile conditions. Death grins while going about his work. The image could be one of Spanish flu or of war, and its ambiguity reinforces the sense that the two were inextricably intertwined.

The Cultural Bailout We Need Has Been a Long Time Coming

Where artists did not face the horror of the disease, cartoonists took up the charge. From educational cartoons that spread public health information to more humorous encounters between germs and humans, cartoonists regularly provided the public with models for visualizing the disease. The Braggart Microbe, a cartoon by Salvador Bartolozzi that appeared in Madrid’s El Imparcial in June 1918 (after the pandemic’s initial wave), reflects the flu’s association in Spain with the relentless seducer Don Juan. The Braggart Microbe’s utterance is a slightly altered version of a line from José Zorrilla’s 1844 play Don Juan Tenorio: “I scaled palace walls, I descended upon cottages.”23 A photograph of the influenza microbe would have been incomprehensible to most people in 1918, and thus artistic intervention was required. Casting the virus as Don Juan enabled Spaniards to process the epidemic in a pop-cultural narrative mode.

This is not unlike attempts to understand COVID-19 today. While an image of a coronavirus germ under the microscope is more readable now, personifications of the microbe persist. We may not see much highly polemical imagery of the kind that artists like David Wojnarowicz and groups such as Gran Fury produced during the AIDS crisis of the 1980s and ’90s. But we do frequently encounter—especially on our phones and other electronic devices—visual responses in the humorously didactic vein of Keith Haring’s “safe sex” posters. Sometimes, though, the vocabulary is darker. Take the popular meme that depicts coronavirus in glasses and a baseball-style cap, sitting at a bar (drinking Corona beer, of course) with Spanish flu and the Black Death. Influenza, sporting a handlebar mustache and holding a glass of whiskey and a cigar, looks knowingly at Black Death, who is dressed as a plague doctor and drinking from a goblet of blood. Coronavirus states that his intention is “not to KILL people per se, but to raise awareness around access to public health!” To which Black Death replies: “F****ing millennials.”

Architecturally, too, the effects of COVID-19 are similar to those of the Spanish flu. The tent facilities of 1918 were echoed first by the Huoshenshan Hospital in Wuhan, constructed in ten days as the world watched on YouTube, then by medical tents erected in Central Park. New structures are supplemented by adaptive reuse—notably the transformation of places like the Living Room exposition complex in Wuhan or the Jacob K. Javits Center in New York into temporary hospitals. In 2020, as in 1918, rapid response has necessitated a startling alteration of urban space, whether through repurposing or supplementation. Such actions help convey that the government is actually doing something, that citizens should feel safe when masked and quarantined, regulated and isolated. So far, data suggests that COVID-19 has a lower fatality rate than Spanish flu, though it is too soon to know for sure. Nonetheless, a historically familiar, low-level but all-consuming fear has set in, as citizens are inundated with bleak information and an invisible germ once again haunts American cities.

The Spanish Influenza Transformed Everyday Life. But Artists Struggled to Visualize Its Impact, Page 2 of 2