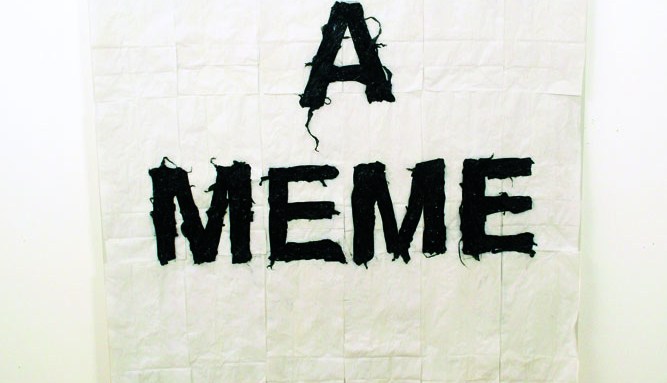 PICTURE A HOLE. Place yourself at the center of the hole. Did you do it? If so, you might be a comic! Also, you might be an artist![pq]I don’t know how comedy and art are related. I’ve been asked to discuss their relationship, and I’ve met the topic with full-body paralysis.[/pq]

I don’t know how comedy and art are related. I’ve been asked to discuss their relationship, and I’ve met the topic with full-body paralysis. To quote Deleuze (a gorgeous fisherman I met while performing on the outskirts of Prague): “I am less afraid of being seen or touched than I am of being put into words.” It is for exactly this reason that writing about art and comedy feels like sterilization. I’ve been so moved to avoid writing this article that I watched Eat, Pray, Love (again), ate two undercooked yams and left scathing feedback on an online baby-shower registry.

I have performed in art galleries and in museums. I have also performed in comedy spaces, including clubs in Nashville where the walls are proudly plastered with what seems to be the same man’s headshot over and over. I have performed in a cement basement in Berlin and at the epicenter of comedy nerd-dom, in Hollywood. I’ve had a male audience member scream, “Who’d want to fuck you?!” in the middle of a set, and I’ve had a stone-faced art babe roll her eyes at me while clutching a bejeweled egg. Both hurt. Both were fine.

The labor practices previously associated with comedy—tour until you die, write 12 network sitcoms, etc.—have been transformed wildly, along with the audiences and performers. Ten years have passed since I started doing comedy. In that time, Twitter has provided aspiring comics with a platform where they can get instant feedback on their jokes in the form of retweets, and the Upright Citizens Brigade Theatre has mobilized a comedy army through cheap improv classes at a network of locations in major U.S. cities, attracting everyone from hopeful actors to PR agents. Never before has comedy been more popular or more written about. With countless podcasts and think pieces emerging daily, we are talking ad nauseum about comedy, and like sex, it has lost mystique and intrigue. Everyone bangs and everyone’s cousin’s boss wants to do stand-up.

But weirdness has failed us. Hence the crisis of categorization. One of the defining qualities of what I’m calling art comedy seems to be an attempt to derive performance from theory. Art comedy knows too much. It was raised on the Internet and, despite live gigs, it’s trapped there. It exclaims, “I’m not that!” (i.e., not mainstream) but fails to offer an alternative.

Comedy has become so widespread that comics are desperate to stand out in any way, even if it means gluing a basket on a hat and asking for suggestions. But I’m not necessarily against this transformation, as it may give way to a less precious treatment of what comedy is or isn’t.

My stage persona comes from a refusal to adhere to one point of view, in spite of the expectation that comedians should have a clearly definable voice. Ideally this voice should be confessional, but unambiguous in any case. I don’t want my comedy to be read as purely autobiographical, but I don’t want to be seen as a fictional character either. I want to be confusing, and for this reason the cowards at the top (who run on fear, Propecia and fear) may be less likely to give me a job. The only way I could have my own sitcom is if it’s called “Crazy Kate!” and features me 15 pounds lighter working at a futuristic spaghetti factory.

Stand-up has taught me to make space for myself within a fairly inhospitable genre by gently mutilating it. The only way out of hell is to walk through hell. (Hell in this case is a comedy show where people look at you as if you’re a wound.) I don’t want to adjust my comedy for a particular context; I want to transform the context to accommodate my desires. Doing stand-up has taught me the importance of insisting on these desires, and in demanding space where you’ve been told there isn’t any. Part of resisting genre is forcing yourself to change, and lately I’ve wanted to speak in “my” voice, to talk about actual things that have happened to me. But I wonder if a turn toward autobiography would diminish my appeal in the art world. Why is the Museum of  Contemporary Art, Los Angeles asking me to perform and not Louis C.K.? Just kidding. They can’t afford him, and I’m way younger. But is laughter becoming so banal that it’s more important just to stand out than it is to be funny? It would be tight to be invited to a party where Björk is rotating slowly on an orb. But is it worth putting my jester hat on a shelf?

Maybe people need to start laughing less at comedy. Simply turn on any late-night comedy program and allow yourself to become gently bludgeoned by subtle hell. I’m scared to name names because I’m a careerist, but it’s become clear that any beige sub-performer is considered a safer bet than any living woman. There will be a blind “Daily Show” correspondent before a woman will host a late-night talk show. If labeling something as “art” brings more women, queers and people of color to comedy, then maybe the mainstream will finally be forced to change. As my friend and fellow wacky art comic Casey Jane Ellison says, “We’re not playing with the form, we are the form!”

‘I Count Myself Hugely Lucky’: David Crosby Looks Back in Unheard Interview Audio