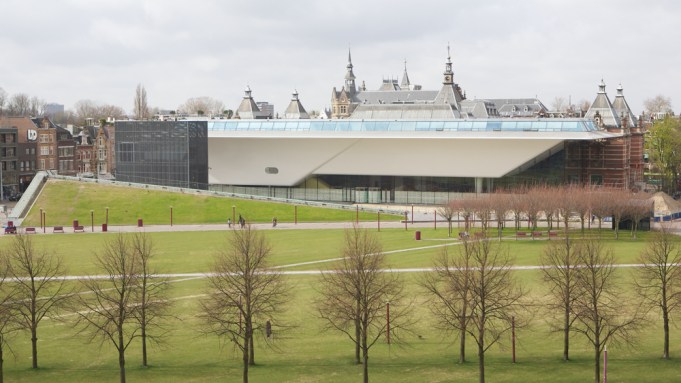 After nearly a decade of renovations, the Stedelijk, Amsterdam’s premier venue for modern and contemporary art, is scheduled to reopen Sept. 23 with a bold new addition designed by the local firm Benthem Crouwel Architects. The building, designed by Adriaan Willem Weissman in 1894, has been closed since 2003. The museum operated for a while in temporary headquarters, and for the past two years, under its new American director Ann Goldstein, has commissioned roving projects around the city.

Responsible as well for the refurbishment of the original Neo-Renaissance building, Bentham Crouwel conceived of the two parts of the re-booted Stedelijk as a structurally and esthetically unified interior. Retaining the earlier building’s gabled and brick exterior, the architects made no attempt, however, to match that look in the structure or cladding of the new, 98,400-sq.-foot wing. Built like a bridge in order to leave the plaza level transparent, the new wing’s all-white exterior, sheathed in synthetic fiber panels, fans out broadly as it rises. More commonly used for the hulls of boats and in sports equipment, light and extremely strong, the façade’s synthetic fiber, Twaron, painted white, is completely seamless.

Lead architect Mels Crouwel himself affectionately referred to the new wing as “the bathtub” in a recent press conference in Amsterdam; the nickname appears to be taking hold in the public and press. Ironically, in digging the foundations of the building, engineers were continuously challenged by the city’s notorious seepage; the building is a brilliant exercise in keeping water out. (Benthem Vrouwel, by the way, has designed the city’s new subway system, years behind schedule.)

Where once the main access of the Stedelijk faced away from Museum Square on Paulus Potterstraat, visitors can now access the museum through an entrance directly on the famous square, which it shares with the Rijksmuseum, Van Gogh Museum and Concertgebouw. Among the most striking features of the new building’s interior is a 10,800-foot underground gallery—billed as the largest uninterrupted exhibition space in Holland—and a single-level auditorium with a long bench built into its walls and an open central floor for performances. (Seating for events consists of chairs brought in for the occasion.) Directly connecting the basement level to the third-floor galleries is an escalator, its exterior tube colored yellow, unlike the museum’s walls, which are uniformly white. (There was some tension between Goldstein and Crouwel; the latter wanted the auditorium to be painted black, but Goldstein prevailed.)

The great expansion of exhibition spaces is going to allow for a more thorough display of the museum’s permanent collections, which have particularly strong holdings of avant-garde artists like Mondrian and Malevich, 20th-century design and postwar movements such as CoBrA. The inaugural temporary exhibition, “Beyond Imagination,” will feature new and commissioned projects by 20 artists, both Dutch and foreign, who live in the Netherlands.

Long in the planning, the first posthumous retrospective of Mike Kelley is slated to open at the Stedelijk Dec. 15; it will travel to the Centre Pompidou, Paris, MoMA PS 1 in New York and the Museum of Contemporary Art, Los Angeles, where Goldstein formerly served as curator.

These Laser Tag Guns and Sets Bring the Arcade Home