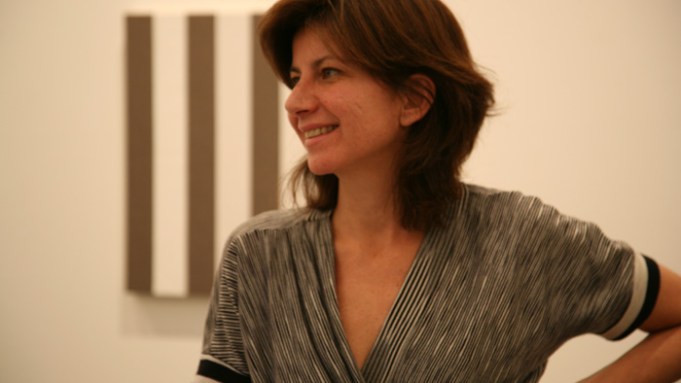 After five years on 510 West 25th Street, Stefania Bortolami has packed up her eponymous gallery and moved a few blocks south.

Bortolami Gallery inaugurated its new space on West 20th last week with “Redressing,” open through November 6. The exhibition features work from many of the artists who have previously participated in a group show at the gallery, including gallery artists like Daniel Buren, Richard Aldrich, and Aaron Young, and friends like Hanna Liden, David Salle, Tim Noble and Sue Webster.

“Redressing,” Bortolami says, is a show built on “lots of clothes and body parts, some of it very clear and some of it very subtle,” and ranging in scale, among other qualities, from Patrick Tuttofuoco’s humongous sculpture of a mask to Mika Rottenberg’s intimate photos of the human body. The title, to a degree, puns on the gallery’s makeover.

The new gallery splits 6200 square feet over two exhibition spaces—compared with the 4000 square-foot jewelbox of the previous location. The gallery has kept the 14 artists represented when it opened as Bortolami Dayan five years ago, and added Tom Burr, Richard Aldrich, Aaron Young, Shane Campbell, Thilo Heinzmann, and Peter Peri.

Since she co-founded with fellow Gagosian director Amalia Dayan, other galleries have moved onto the street, including big Asian galleries like Gana and Arario. Dayan left the gallery to start a family.

At the end of their five-year contract to maintain the space, which passed earlier this year, Bortolami’s co-owner of the old building, Adam Lindemann (Dayan’s husband), wanted to sell. When she began looking for a new space, part of the appeal of the 20th Street location was its rougher, relatively uncolonized feel. The building had been empty for the past two years, though parts were rented out on occasion—in 2009, Nicole Klagsbrun rented it to accommodate a large-scale project by  Adam McEwen.

“It feels a little industrial,” Bortolami said. “It doesn’t feel like every single door is a gallery.”

The new gallery shares the block with ZieherSmith, Anton Kern and Elizabeth Dee, but also counts a Correctional Services facility as a neighbor.

“The floors and the ceilings, we kept them rough. It’s a space which is a lot more challenging [for the artists to work with],” Bortolami says. “And I like that. I like the idea of, in a way, giving less of a beautiful space for art so that art is forced to speak louder.”

Sculptor Tom Burr agrees. “The old space on 25th Street was very beautiful, but kind of reflected a certain moment they were interested in,” Burr said. It was difficult for artists to do more than one show, to be inventive, in the one-room setting, he said. “The new space is generated by the needs of her artists. It’s less about actual architectural details.”

Before opening this gallery, Bortolami developed a reputation for a sharp eye and business sense—and close, attentive relationships with her artists—during seven years at Gagosian Gallery in New York; and, prior to that, three years at Antony d’Offay Gallery in London.

“I could call her the female Larry,” said painter Cecily Brown, comparing Bortolami to power dealer Gagosian. “Some people might not like it but I think she’d appreciate it because she knows all his good qualities.” Brown is represented by Gagosian, and in the five years that the artist and Bortolami overlapped at the gallery, Bortolami was the one who looked after Brown. Of Bortolami’s eye and instinct, Brown said, “She’s had people in mind long before I’ve heard of them. She always seems to know. She’s got a knack for what’s in tune with a kind of zeitgeist as a dealer, but at the same time, has flashes of inspiration—showing Daniel Buren (as well as artists with younger careers), which makes the gallery a lot richer.”

Bortolami attended the University of Turin, studying 16thCentury Venetian art for three years. But while working as “a junior, junior everything in different departments at Sotheby’s,” after post-graduate work at Sotheby’s in London and a masters at Middlesex University, Bortolami met gallerist Alejandro Sales who offered her a spare room in his Barcelona gallery, one previously used as storage.

“I brought him to some dinners with artists and he suggested, ‘Why don’t you come to Barcelona to do some shows?’ ” Bortolami said. “He had a separate entrance and everything, and the fact it was for free was very important.”

Bortolami did roughly four shows a year, for four years. Several of the artists from those early days have gone on to have prominent careers, including Anya Gallaccio, Graham Gussin and Alicia Framis.

Gagosian offered Bortolami a job while she was working for d’Offay, and she took the opportunity to move to New York. Opening a gallery again wasn’t something Bortolami was thinking of, necessarily, in the decade or so between Barcelona and this most recent venture. Lindemann had suggested that Dayan and Bortolami open a gallery with him, where he would be the principal investor and Dayan and Bortolami would handle operations. Dayan and Bortolami first turned down the proposal, and then decided to do it on their own.

“In a way, when we ran a gallery together it was more balanced on paper,” Bortolami said. Dayan has closer relationships with collectors, Bortolami said, She describes herself as “much more of an artist person.” The two parted ways in 2007, and are still friends. “But then in reality I think we’re both happier like this.”

Dayan now runs the secondary-market gallery Luxembourg & Dayan with Daniella Luxembourg uptown. She was not available for comment.

“Stefania truly loves art … not simply the selling of art,” Burr said. “She really is very much a gallerist that way and not simply a dealer.” Bortolami repeats the enthusiasm. Female Larry or not-and that’s strong praise-she sees herself as a gallerist first.

“‘Gallerist’ for me is really the people that represent artists and one of the things that gallerists have to do is sell the work,” Bortolami said. “It’s about really liking the art. That’s the main thing, absolutely, and if you don’t have that you cannot do it.”

Sony Is Slashing Prices On Everything From Wireless Earbuds to 4K TVs: Up to $800 Off