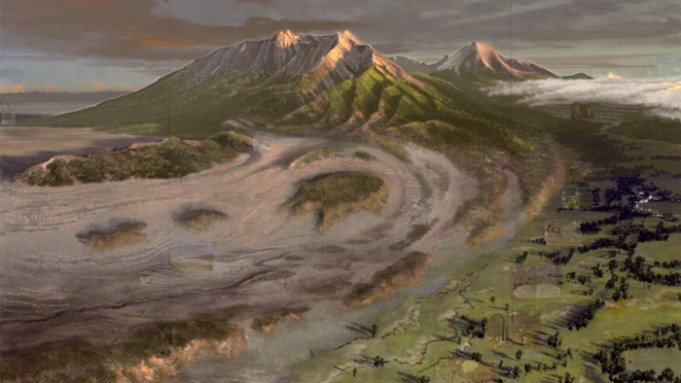 Stephen Hannock says that when he paints landscapes he’s not painting mountains, water, and trees so much as he’s painting light itself.

Hannock’s most recent work, the large-format landscape (80″ x 128″) Mt. Blanca with Ute Creek at Dawn, is the latest addition to the Denver Art Museum’s Western American art collection. For the past twenty years, the museum’s Contemporary Realism Group has helped the museum to collect contemporary Colorado landscapes. “The landscape of the west is still a viable subject—as relevant now as it was in the 19th century,” says Thomas Brent Smith, Director of the Petrie Institute of Western American Art at the Denver Art Museum.

MT BLANCA WITH UTE CREEK AT DAWN, COURTESY THE ARTIST (DETAIL BELOW)

While Hannock’s rural landscapes may be reminiscent of 19th century Luminist painting, he differentiates himself from landscape tradition. “I’m not trying to recreate a physical place,” the artist says. “Many realistic paintings are not that interesting to me if the image is overwhelmed by precise technique.” And issues of naturalism and realism are very much at stake for Hannock, within a constellation of contemporary references.

“Seventeenth century French landscape painter Claude Lorrain said that a landscape composition must have a foreground,” Hannock says.  “My landscapes don’t have a foreground.” This lack of immediate identification of depth forces the viewer to break the two-dimensional planeof the picture surface. “One has to go through the plane and into the imagined space before encountering the forms that catch the light.”

Hannock was born in Albany, New York, in 1951. By his early twenties, he had discovered “his ultimate art school” as an apprentice to American sculptor and printmaker Leonard Baskin. He began drawing, making woodcuts, and painting in the dark with phosphorescent pigment under black light. “Being true to my generation, I was trying to make big movie screens. Whether literally painting with light, or with the eventual polished paint, I was trying to achieve a mood,” Hannock says of the influence of American mass media technologies on his painting. “The composition most conducive to achieving this mood was landscape.”

Hannock’s current medium of choice is acrylic. Not only does it dry faster and allow for “serious splashing,” it takes to power tools without solvents.

Fixated on creating mood, Hannock discovered his signature technique of sanding and polishing layers of paint and incorporating submerged collage and texts. Initially, these narratives and images are hard to see, but upon close inspection the effect is like an archaeological unearthing, releasing evocations of former lives and perspectives.

THE OXBOW: AFTER CHURCH, AFTER COLE, FLOODED, GREEN LIGHT, 1998. COURTESY THE MTEROPOLITAN MUSEUM OF ART.

By the title of his most widely-known work, The Oxbow: After Church, after Cole, Flooded, Green Light,  (1998, Metropolitan Museum of Art) it’s clear that Hannock is influenced by the great American landscape painters of the 19th century, especially the Hudson River School. With Cole, the influence is mostly anecdotal, in terms of shared subject matter.The Oxbow was only two miles from Hannock’s Massachusetts loft of 15 years, beginning in the 1970s. Church’s influence is his theatricality; Inness’ influence is mood. It was his use of washcloths, along with James McNeil Whistler’s meat cleavers, that also inspired Hannock’s use of random orbital sanders.

With Mt. Blanca with Ute Creek at Dawn, the painting’s tension lies in the collision of text, collage and the subject of the landscape. As in his other landscapes, the stream-of-conscious narrative at times bears no relation to the actual site. They are merely personal riffs born of the moment.  “The images are glued to the surface and the text comments on the relationship. The text is the reminder that the piece is actually more about people and culture…. than it is about topography,” he says. “Often I can’t remember what is written a few hours after I write it.”

Hannock splits his studio time between a large millspace in North Adams, Mass., nestled at the foot of a mountain and the nexus of Houston and Broadway streets in New York City. To observe him at work is to see the artist kneeling or stooping over a canvas placed on the floor or on saw horses. Sanding and polishing with both hands, grinding multiple layers of resin, he looks more like a floor sander than an artist. “When you rip through piles of paint and polish, interesting things happen,” he says. “You become more a curator of accidents than a deliberate applier of paint.”

To arrive at a surface sheen comprising eight to 12 layers (nearly one-fifth of an inch thick) requires many gradations of wet/dry grit. Once he arrives at the desired surface, then come the photos, texts and brush strokes. Mt. Blanca with Ute Creek at Dawn is an ode to Blanca Peak in the San Luis Valley. Embedded in multiple layers of acrylic resin is a contemporary story of this region comprised of disparate conservation-themed texts and quotes; area photographs by John Fielder; several pages from Dr. Seuss’s environmental allegory, The Lorax; images of a transmission tower and a Navajo Matriarch; and a nude torso daguerreotype of his late wife by his friend Chuck Close. (The image was applied to the canvas on the 10th anniversary of their marriage, April 8, 2010.) It’s a complicated personal diary charting his memories and thoughts as it is a meditation on conserving one of the few remaining pristine landscapes of the American West.

“It’s the stories of life that we weave through these paintings,” he says. “That’s the nature of making art. Some work inspires more introspection… and more work. And other efforts make you move on to the next adventure. “