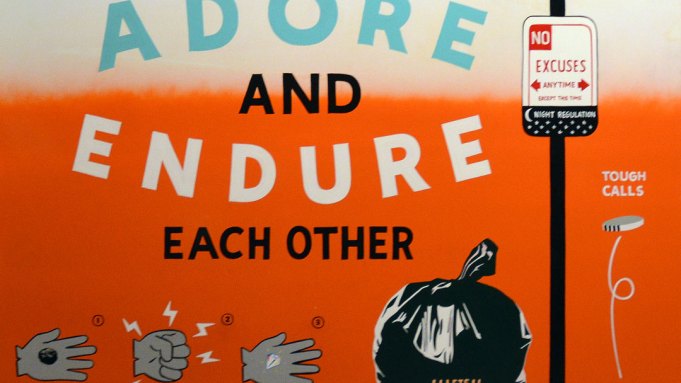 “This is my play for greatness,” Steve Powers told A.i.A. at the Icy Sign Shop, his Downtown Brooklyn studio, last week. Powers was describing new paintings he has prepared for his first solo gallery show in New York since 2004, opening Sept. 6 at Joshua Liner Gallery.

While Powers talked at Icy Signs, two assistants, whom he calls “sign mechanics,” sat painting bold-lettered idioms and cartoonish illustrations on four-foot-square aluminum panels. These will be included in the exhibition, as will Powers’s “metaltations,” eight-by-ten-inch enamel-on-aluminum panels that the artist paints daily from sketches he makes during his morning commute on the subway. (He frequently posts photographs of the finished paintings on his blog.)

Also on display will be “the Adores”—over 300 rectangular panels, each painted with the word “ADORE” in bright colors. Powers and the sign mechanics began making the paintings when Icy Signs opened in its new location, on Livingston Street in Brooklyn, last summer as a way to keep busy. They haven’t stopped since, though preparing other works for the upcoming exhibition and projects for businesses in Downtown Brooklyn have become more than enough to occupy them.

The artist has spent much of the past eight years creating public work: he’s executed several projects at Coney Island, received a Fulbright to create murals in Belfast and Dublin, and painted walls along an elevated train track in Philadelphia with a massive “love letter.” Most recently, he has been making work for Downtown Brooklyn.

Powers, who is from Philadelphia, is known best for his graffiti writing. After moving to New York, in the early 1990s, Powers embarked on a project to tag storefront grates in Manhattan, Brooklyn, and the Bronx with his street moniker, ESPO, also an acronym for the initiative: “Exterior Surface Painting Outreach.” At the end of the decade, Powers moved his practice indoors and began studying sign painting. Powers showed his paintings at Deitch Projects in New York until the gallery closed in 2010.

At this time last year, Powers completed his Love Letter to Brooklyn, which he painted on the outside-facing concrete walls of the Macy’s parking garage at Hoyt and Livingston Streets. Since then, Powers and the sign mechanics at the shop have painted signs for Downtown Brooklyn businesses, for free.

Asked to differentiate the Love Letter and other street paintings from the work that will be on display at the gallery, Powers said, “It’s all the same. It’s just indoor voice and outdoor voice.”

He continued, “In the street I boil it down to like the quickest, fastest, boldest, brightest sentiments. And inside I can be a lot more complex. I get to whisper, I get to talk a little more. [It’s] a lot more conversational, a lot less yelling and singing.”

By contrast, in the gallery “people are making a special trip to go there,” he said. “They’re ready and willing to accept the signal.”