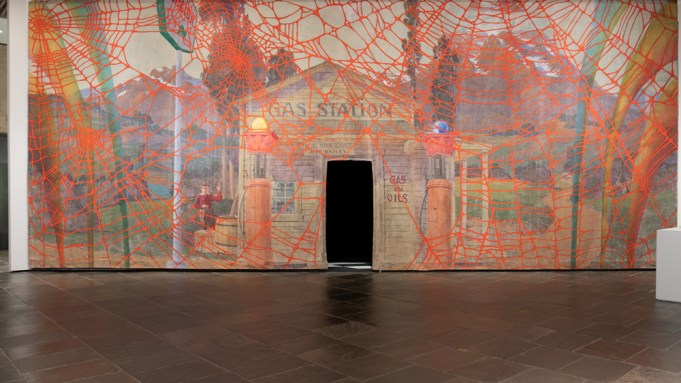 “I believe in facts,” President Obama recently declared on the 2018 midterm trail. “I believe in a fact-based reality and a fact-based politics. I don’t believe in just making stuff up.” His remarks, directed at our sitting president, reflect a wider liberal belief. Over the past two years or so, there has been growing concern that the ascendant far right has adopted a politics of truth disruption: cynically challenging facts, gleefully trafficking in lies, and weaponizing the public distrust that ensues. In response to this perceived menace, mainstream centrist politicians and pundits have doubled down on the rhetoric of unalloyed truth, conveniently forgetting the many lies and embellishments of their own allies. The new liberal consensus seems to be that the facts are “ours” and paranoia “theirs,” that “our” voters analyze reality whereas “theirs” act on impulse. As a result, the gray zone of fantasy has been conceded.

“Everything Is Connected: Art and Conspiracy,” on view at the Met Breuer in New York through January 6, both reflects and complicates this picture. The exhibition offers an overview of how artists have depicted paranoid feelings about structures of political and economic power from the assassination of John F. Kennedy to the present. Featuring eighty-three works by thirty artists, the show fills the museum’s fourth floor and is thematically split into two halves. The first features works of a strictly documentary nature, such as Trevor Paglen’s photographs of CIA black sites or Hans Haacke’s cool-headed exercises in institutional critique. The second half shifts into a fever dream, showcasing works that engage conspiracy theories of every stripe, from the belief that a Zionist cabal controls the US government to the story that the Clintons covered-up the murder of White House counsel Vince Foster.

Organizationally, then, curators Doug Eklund and Ian Alteveer hew close to the liberal party line, placing facts and paranoid fantasy into stark relief. Based on this division, critics largely seem to have taken the exhibition as a training program for democracy. As Philip Kennicott put it in his review for the Washington Post, “Art can help distinguish between conspiracy and reality, and this exhibition proves it.” Yet individual works in the show—and the experience of seeing them in concert—cuts against this easy binary. Not only do several of the artists self-consciously question the possibility of capturing the truth, many of the best works here suggest that paranoia provides a central and inescapable way of seeing and knowing the world.

The show’s first few rooms establish an aesthetics of information: we see graphs, plots, and tables, many culled from government records. Mark Lombardi charts global networks of finance, politics, and industry; Alessandro Balteo-Yazbeck creates sculptural maps of Iraqi oil fields; Jenny Holzer paints official documents. Here, the idea seems to be that sunshine is the best disinfectant, that information itself is a clarifying force for democracy. The artist is presented as an investigative reporter, the artwork as a form of data journalism, regardless of its formal underpinnings.

Consider Paglen’s series of photographs of CIA black sites near Kabul, which he made in the mid-2000s. The artist, who holds a PhD in geography, used testimony from former prisoners to locate the sites of their captivity on satellite imagery. When he traveled to Afghanistan, he could only shoot the torture sites from a distance, through a zoom lens. The resulting grainy images look less like evidence than like pictorialist photography. Thus, while they are the fruit of a serious investigation, the images nevertheless disavow claims to political or epistemological authority. “We’re right to be suspicious of representation right now,” Paglen said in a 2011 interview published in October. “The days of believing that there’s something out there in the world that can be transparently represented by a photograph or image are over.”

The curators, however, do not attend to the self-reflexivity of his work, treating it instead as fact. And they do the same with other pieces, such as the Videofreex collective’s 1969 video interview with Black Panther activist Fred Hampton, smoothing over its radical Utopian yearning. This normalization has a strange, unintended effect. The cascade of data mimics and intensifies key interfaces of the contemporary media apparatus, like cable television or Twitter, in its montage of disparate sources. The exhibition seems to enact how the grounds of “the fact” can feel abstract and obscure when encountered in a hypermediated information landscape.

Located near the exhibition’s midpoint, Rachel Harrison’s Snake in the Grass (1997) shifts the tone. Visitors walk through a mazelike installation of drywall sections, precariously suspended from yellow ropes, anchored by green garbage bags filled with ballast. On some of the walls hang framed photographs of the grassy knoll in Dealey Plaza near the site of Kennedy’s assassination. Each of the photographs are printed in slightly different shades of color. These are the kind of minute details that so often animate debate among conspiracy theorists, and here, among the wobbly drywall, they stir viewers into a temporary mania of interpretation.

Jim Shaw also creates a physical space for experiencing the logic of paranoia. His 2006 installation, The Miracle of Compound Interest (from the series “Left Behind”), is a looming theatrical backdrop that depicts a small-town scene outside of a mom-and-pop gas station, enigmatically covered in a web of red lines. Viewers then physically enter the work through a small hole, finding in the darkened interior a circle of garden gnome figurines gathered around a pulsing money-green fire. Shaw thus dramatizes the paranoiac’s quest for deeper meaning, inviting visitors to enter and search behind the curtain.

The exhibition is dedicated to Mike Kelley, and he appears as a kind of patron saint. His Untitled (Government and Business), 1991, is a scatological painting resembling a flowchart of dense bureaucratic connections, transmogrified into a winding and dense intestinal mass. The words “government and business” are spelled out in scattered letters. In a sense, Kelley’s work parodies the official graphs so earnestly displayed in the first half of the show. It stews—even glories—in uncertainty.

The artists in the exhibition’s second half explore (and perhaps exhibit) a form of modern paranoia intimately linked to the machinations of capitalism. Marx famously observed that the commodity fetish both obscures the actual value of an object and also layers it with an enigmatic social meaning. Monetary value “converts every product into a social hieroglyphic,” he wrote in Capital. “Later on, we try to decipher the hieroglyphic, to get behind the secret of our own social products.” These contemporary artists reflect his thinking, presenting a vision of modern society in which we have all turned into paranoiacs, suspicious of appearances and eager to read the hieroglyphs. As much as the curators would like to present a strict contrast, there is instead here little discernable distinction between the experience of documentary and fantasy.

Free Pancakes, Anyone? Buy $50 IHOP Gift Cards for $39 Today Only