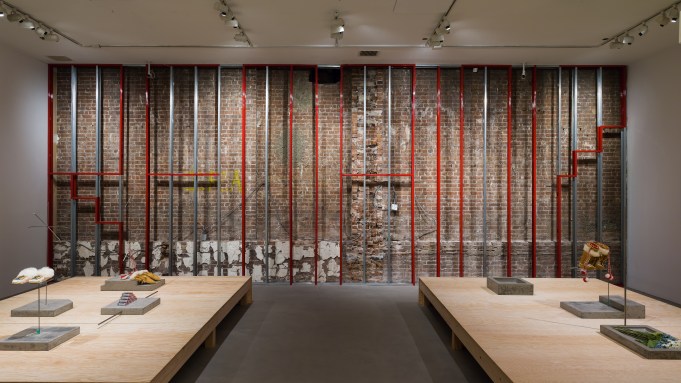 In the spring of 2017, Alexandra Bell began wheat-pasting posters of edited and redacted pages of the New York Times on subway platforms and buildings around the Bedford-Stuyvesant, Crown Heights, and Bushwick neighborhoods of Brooklyn. Titled “Counternarratives,” Bell’s series highlights the newspaper’s racist bias by juxtaposing a marked-up copy of a page with a second version, revised to remove the slant. In the first of these works, Bell replaced a story headlined “A Teenager Grappling with Problems and Promise” with a graduation photograph of Michael Brown, the black teenager shot by police officer Darren Wilson in Ferguson, Missouri, and the words: “A Teenager With Promise.” Drawn in by their recognition of the Gray Lady’s iconic layout and typeface, passersby are invited to follow Bell’s breakdown of the newspaper’s contribution to the racist mythologies of the dominant media discourse.

Subsequently featured in exhibitions at MoMA PS1 and Koening & Clinton, Bell’s street art project exemplifies the practices that mattered most in 2017. Art like hers spurs empathy by bearing witness to the effects of structural violence. It both does and indicates the work that needs to be done, centering interpersonal networks of care and maintenance that exist in subordination to larger, desensitized political structures.

In “Speech/Acts,” a group exhibition organized by Meg Onli at the Institute of Contemporary Art in Philadelphia, Kameelah Janan Rasheed and Tiona Nekkia McClodden stood out as artists who take up voices, histories, and experiences that can help audiences move forward and endure in the future. For her installation A Supple Perimeter (the second activation), 2017, Rasheed painted black two walls and hung them with prints of her texts reflecting on blackness and subjectivity. These texts were organized in clusters of varying sizes; broken up with enjambments and stanzas, the words repeat and distort. The texts were temporary, and Rasheed reconfigured them over the course of the show, to convey her understanding of black subjectivity as locked into language but maneuvering against its constraints. McClodden’s video Essex + Audre (2015) and installation The Brad Johnson Tape, X – On Subjugation (2017) express nested histories of identity. The former work includes a scene from Marlon Riggs’s film Tongues Untied (1989) in which poet Essex Hemphill recites a section of Audre Lorde’s poem “Eye to Eye: Black Women, Hatred, and Anger.” The clip resonates with the seemingly contradictory emotions of rage and desire at play in The Brad Johnson Tape, X – On Subjugation, which uses a suspension bondage frame as an apparatus for projecting a video depicting scenes of S&M play that McClodden choreographed and recorded after a “rage poem” by the eponymous writer, a lover of Hemphill.

Works such as Rasheed’s and McClodden’s may not appear at first to operate as acts of protest. But by engaging art they shift the conversation of social justice into a space of affective and analytical conviviality. Using visual and emotive means that aren’t necessarily available to mass protest and direct action, they advocate for people and communities whose lives have been historically obfuscated and make the resonance of these historical stakes palpable in the present. Sable Elyse Smith’s “Ordinary Violence,” on view through February 18, 2018 at the Queens Museum of Art, expresses the lived effects of the carceral system in the United States, where, according to reports from the Pew Research Center, black Americans are more than five times likely to be incarcerated than whites. In Smith’s collages and videos, images of family members with their incarcerated kin show the psychological violence enacted on visitors trying to express love. As these works reveal, abuses and humiliations are built into acts of care that are tightly choreographed by the state.

As an intervention into the literal framework of 80WSE in New York, Duane Linklater removed a layer of the gallery’s walls to expose their support structures , as if to suggest what literally upholds these spaces are the invisible and devalued lives of dispossessed American Indians. “From Our Hands,” made in collaboration with his grandmother Ethel Linklater (Trapper) and son Tobias Linklater, supplemented the architectural intervention with objects drawing attention to the marginalization of craft and folk practices, especially those of Indigenous peoples. In October, e-flux and Columbia University hosted the launch of the third edition of Vivian Ziherl‘s Frontier Imaginaries, an art and research initiative that studies the political and symbolic significance of borders. At one end of e-flux’s gallery, Richard Bell’s installation Embassy, an iteration hosted conversations and screenings related to about Indigenous sovereignty. Elizabeth A. Povinelli’s A Requiem to Late Liberalism was installed as a schematic vinyl on the opposite wall of the space. Structured like sheet music, her diagram collected accounts of what late liberalism is and what it does by mapping the names of historical events and their dates onto the staff in a linear timeline that begins in the 1950s and projects into 2020. Video contributions from an international community of artists and activists—Miguel Coyula, Bonita Ely, Rui An Ho, Karrabing Film Collective, Yazan Khalili, Wendelien van Oldenborgh, Naeem Mohaiemen, MTL, Christian Nyampeta, Adania Shibli—were periodically projected over Povinelli’s score.

Art does not have to be reactive to effect change. Practices that are slow-moving and methodical have the greatest capacity to carve out structural spaces for accountability over time. Increasingly, institutions are responding to the social mood and to demands of artists and art workers by revisiting historical inadequacies. The Brooklyn Museum’s “We Wanted a Revolution: Black Radical Women, 1965-85,” curated by Catherine Morris and Rujeko Hockley, was a densely packed exhibition, with a number of vitrines of archival materials and monitors running multiple films. The reading library, listening stations and ephemera included in “Making/Breaking the Binary: Women, Art, & Technology 1968-1985,” curated by Kelsey Halliday Johnson at the Rosenwald-Wolf Gallery at the University of the Arts in Philadelphia, put women artists in dialogue with women working in science and technology whose concurrent research shaped the modes of communication and representation we use today. At the New Museum, “Trigger: Gender as a Tool and a Weapon,” curated by Johanna Burton, insists on gender and sexuality as experiences with multiple meanings. The networks of creative and intellectual support that these exhibitions reveal and help build become even more crucial now, as the Center for Disease Control introduces a ban on the words “transgender,” “fetus,” vulnerable,” and others.

Interinstitutional and hybrid practices that foster community can most effectively perform the critiques we need. Although dominant institutions are not nimble or dynamic enough to keep up with newer, more insistent articulations of ideas of justice, the occupation of them by hybrid and forward-looking practices of protest can nevertheless unmoor long standing power dynamics of disenfranchisement and objectification. The most powerful protests are not always the voices shouting the loudest. Often they are the most nuanced and multivalent, holding open the space we need to endure and push back on homogenizing forces that would limit the horizon of what it means to be human.