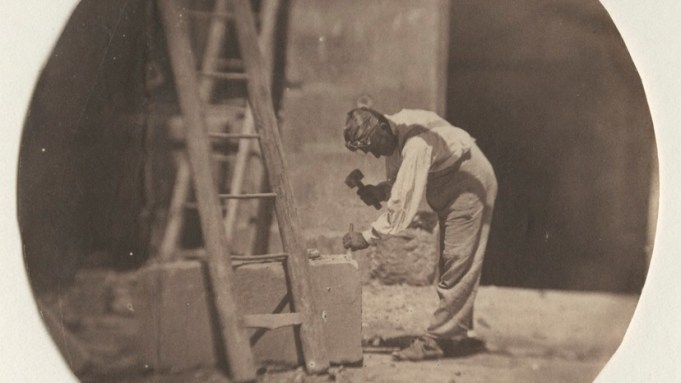 Photography curator Joshua Chuang was excited to the point of jumping up and down on Wednesday, when he spied four of the rare original black-and-white photos Gordon Matta-Clark used in his Walls paper installation (1972). Chuang was at New York and London dealer David Zwirner‘s booth at the annual Photography Show (Apr. 10-13), where he led A.i.A. on a walkthrough of the fair’s 34th edition, organized by the Association of International Photography Art Dealers (AIPAD). Eighty international galleries have brought a range of work to New York’s Park Avenue Armory, from examples of the medium’s first years to vernacular photography and digital experimentation by contemporary artists.

“This will be a challenge,” Chuang had declared, while fortifying himself with a cup of soup and looking over the list of exhibitors. “I’ve been coming to AIPAD since the mid-’90s, when it was at a Hilton in Midtown. The nice thing about this fair is that it’s run by dealers, not a corporation, so it has a different vibe.” After more than a decade, Chuang recently left the Yale University Art Gallery, where he was associate curator of photography and digital media and, on Monday, started his new job as chief curator at the University of Arizona’s Center for Creative Photography in Tucson.

Chuang first zeroed in on the booth of New York dealer Hans P. Kraus Jr. Chuang was drawn to a small, circular salt print by Charles Nègre (The Stonecutter, 1853). “Nègre was a painter who wanted to learn photography, and you can really feel the invention of this new medium in his prints.” On the other side of Kraus’s booth were several early- to mid-19th century drawings, done with the aid of an optical device known as the camera lucida, by Sir John Herschel, from musician Graham Nash’s collection. “The anything-goes experimentation you see in contemporary photography really echoes the medium’s first 15 years,” Chuang observed, while examining Herschel’s exquisite geological and architectural drawings.

Chuang wanted to see if Los Angeles dealer Michael Dawson brought a particular photo he remembered seeing at Classic Photographs, a small fair held in L.A. in January. Dawson knew exactly which one Chuang was referring to, and quickly plucked the 1947 three-color carboro print of three apples and a pear by Russell Cummings from one of his racks. “This is a deeply funny picture,” Chuang remarked, pointing out the plywood table, paper backdrop and blanket-hung-as-curtain framing Cummings’s fruit still life. “He must have known about Steichen’s platinum print of three pears and an apple. I also see a connection here to some of the ‘new still life’ photographers working today, like Lucas Blalock and Joshua Citarella.”

Tucson’s Etherton Gallery was a must-see for Chuang. The booth’s warm maroon walls were hung with work by a range of artists; most intriguing to Chuang were architect-turned-photographer Frederick Sommer’s images of Arizona landscapes. “The allover patterns in these prints—of cacti, rocks and broken glass—verge on abstraction. There’s no up or down. Sommer’s an outlier—he’s not unsung, but is not often talked about.”

At Winchester, Mass.’s Lee Gallery, Chuang asked Michael Lee to pull out some photographs taken in Denver and Colorado Springs by Robert Adams. “Gorgeous! These are outtakes from his New West book. The square format equalizes everything. Just look at the shape of the side of this building; it’s like the entrance to a church. When it comes to Adams, I’ve drunk the Kool-Aid, and now I’m dispensing it.

It was hard to miss Winter Works on Paper‘s booth, hung salon-style in a sea of more sober presentations. A quick pass at the Brooklyn gallery’s offerings revealed everything from early pornography by Monsieur X and botanical cyanotypes to half-retouched Weegees and Robert Capa’s North African war photos.

Our final stop was New York dealer Yossi Milo‘s booth, where Chuang’s focus was two-fold. First up were farmer/artist Marco Breuer’s folded, scored, punctured and otherwise altered sheets of framed photographic paper. “The paper is developed to black,” Chuang explained, “and then scored to reveal the colors underneath that make up the black.” “He uses all kind of tools, like heat guns and scrubbing machines,” Milo interjected.

As the press preview wound down and the opening night party got going, Chuang took a seat at Milo’s table to flip through the dummy of a forthcoming book, years in the making, by Sze Tsung Leong. “These photos remind me of Google Earth—less topographic than a contemporary survey of civilization.”

CEO Claire Spofford on Bringing J. Jill Out of Its Shell