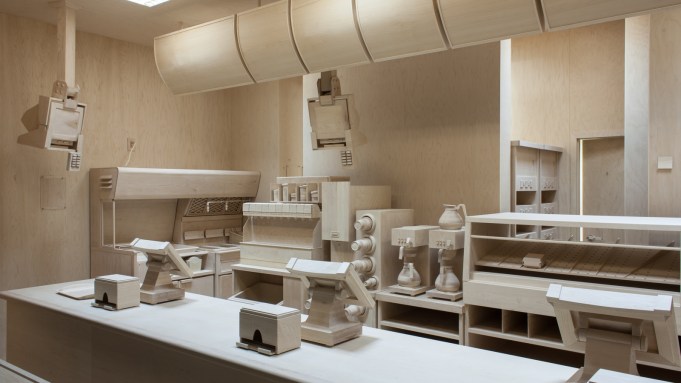 “I’ll tell you what distinguishes this year from last year,” Expo Chicago director Tony Karman told A.i.A. at the fair’s sophomore outing on Saturday, “and I’ll tell you in one word—sales. It was very important that big dealers like David Zwirner and Marianne Boesky do well, and they have.”

Featuring over 120 international galleries at the capacious Navy Piers (up from 100 last year), with views of Lake Michigan, Expo Chicago (Sept. 19-22) represented dealers from 17 countries and 36 cities. Some were returning, like Zwirner (New York and London), Matthew Marks (New York and Los Angeles), and Kavi Gupta (Chicago and Berlin). There were also many first-timers, including Marianne Boesky (New York), Cabinet (London), Massimo de Carlo (Milan and London) and Susanne Vielmetter Los Angeles Projects.

While almost every exhibitor acknowledged that sales were little to none in 2012, nearly all said that business was better this year. Dealers reported a range of sales, starting as low as $4,000 for works on paper by Chicago’s own William J. O’Brien at Boesky. Works in a modest price range found the most ready buyers, but there were outliers. Boesky told A.i.A. of serious interest in an assemblage by Salvatore Scarpitta, Drummer Seargeant (1963), which was tagged at $750,000, and one dealer who declined to be named told A.i.A. that he had sold a million-dollar artwork—and to a walk-in customer, no less.

Jim Dempsey, of the Windy City’s Corbett vs. Dempsey, told A.i.A. Friday that a local collector had bought eight pieces from his booth all at once during the opening, which lasted from 12 to 9 P.M. on Friday. His gallery had one of the fair’s more distinctive presentations, in collaboration with New York’s David Nolan. In contiguous booths, the two galleries offered portraits, by artists ranging from Gavin Turk to George Grosz and Jim Nutt, installed such that the eyes were all horizontally aligned.

Locals were pulling for the fair’s success, especially since art fairs have had a bumpy history in Chicago. “It was rough in the days when Art Chicago was at Merchandise Mart,” Dempsey said, referring to the mammoth downtown building that hosted Chicago fairs for years. “Here there’s better air and the space is spectacular. The ghosts are in the rafters from the ‘80s and ‘90s when this fair was king,” he said, referring to a time when the entire fair circuit consisted of only Art Basel, Art Cologne and Art Chicago.

Adding to the buzz, celebrity visitors like Smashing Pumpkins’ Billy Corgan and actor Vince Vaughn were sighted, as well as important area collectors like Stefan Edlis and Gael Neeson, Lew Manilow, and Howard and Donna Stone.

Gupta’s premiere presentation was as splashy as the new venue: Two new room-sized sculptural installations by New York-based artist Roxy Paine. Almost a year in the making, these works re-create, in carved wood, a control room (it’s a composite of air-traffic control, power plant, waste management and even a recording studio) and a fast-food service counter. Standing in front of Carcass (2013), the fast-food piece, at a preview Saturday morning, the artist said, “It’s about taking the most banal components, things we don’t even really see, and hopefully finding something transcendent in them.”

Even galleries like New York’s JTT, or Workplace, from Gateshead, UK, who said they weren’t doing much business, were satisfied that they were cultivating new clients and talking to them about art. That might sound like dealer-speak, but here, many maintained that the chilled-out atmosphere was a plus in itself.

“It’s very civilized here, and it always has been,” said Cleveland collector Joanne Cohen, who told A.i.A. that she remembered buying her first artwork at a Chicago fair in 1986.

“There’s not the same kind of pressure as at some other fairs,” Gupta said in an interview at his new gallery on Saturday.

Wilhelm J. Grusdat, of Munich’s Galerie Terminus, observed of the Midwest’s well-to-do that “Here, they wear the fur on the inside, not on the outside.” Sitting in his booth in front of a painting by A.R. Penck, he added, “We’ve done well, and when I say well, I mean very, very well.”

Some of the more stylish galleries were in the Exposures section, devoted to about 20 younger dealers. San Francisco’s Jessica Silverman was showing bright geometric abstract paintings by Berlin-based artist Shannon Finley for $5,500 for small works and $24,000 for large ones. They were mostly sold on opening night, gallery manager Rina Kim told A.i.A. New York’s Blackston gallery showed large acrylic abstractions by New York-based Amy Feldman, who won the fair’s Andree Stone prize for emerging artists. L.A.’s Charlie James Gallery was showing works in various mediums by New York-based William Powhida that satirize art fairs. Snark aside, the works were going for $6,500 to $18,000 to buyers from not only Chicago but as far afield as Mexico City, James said.

Second-time exhibitor Cristin Tierney, of New York’s Tierney Gardarin, said she planned to return. In Chicago, “Nobody’s in a rush,” she said in a phone conversation Sunday. “Not once did I hear anyone say the words ‘investment value.’ I would come back every year just so I can do a fair where I don’t have to hear those words.”

Home of the Week: A Sky-High Miami Penthouse with Truly Jet-Set Views

Benoît David on His Rocky Tenure as Yes‘ Frontman: ’It Still Hurts’