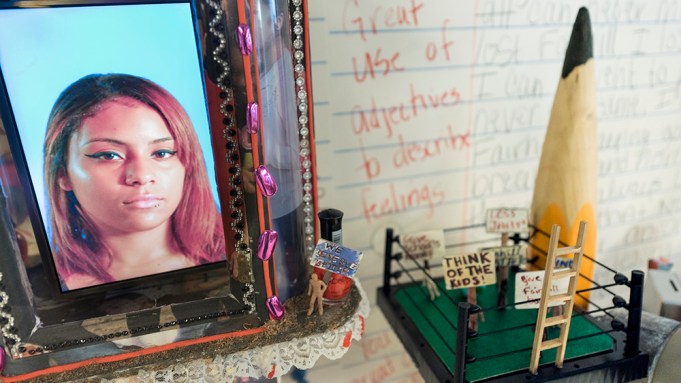 Budget cuts, the privatization of the commons, the dismantling of the social safety net, urban deindustrialization, and the loss of blue-collar jobs to factories overseas are among the well-documented effects of decades of neoliberal policy on American society. To this list I’d add a peripheral yet significant outcome: the rise of social practice art. Everywhere you look, there seems to be an artist now doing work that once we might have expected to be undertaken by the government. On the deindustrializing South Side of Chicago, where the federal government once built miles of public housing projects, Theaster Gates restored a derelict theater and made it a community center, raising funds by selling signed pieces of the theater’s urinals. In the struggling steel town of Braddock, outside Pittsburgh, where the town’s only hospital was recently closed, Swoon raised money to start a ceramic tile workshop that will provide jobs to area residents.

One of the latest and most successful of such high-profile art interventions, Pepón Osorio’s reForm Project, draws critical attention to a nationwide epidemic of big-city public school closures. In 2013, Philadelphia’s School Reform Commission announced the imminent closure of two dozen “underperforming” elementary schools—nearly ten percent of the city’s schools. In May 2015, Osorio began collaborating on an art project with ten former students of the closed Fairhill Elementary School. Using educational materials, furniture, and mementos from the vacated Fairhill building, Osorio and the students recreated a Fairhill classroom a mile and a half away in an unused basement classroom of the Tyler School of Art at Temple University, where Osorio teaches in the Community Arts Practices Program. After the art installation opened to the public in August 2015, the former students—nicknamed “the Bobcats” after Fairhill’s mascot—met with Osorio there weekly for the next nine months in a kind of self-directed after-school program until the exhibition’s close last month. Together they produced art, texts, and videos intended to further educate the general public about the crisis in the city’s public schools and about the importance of Fairhill in particular to the students’ sense of community.

In his thirty-year career, Osorio has recreated a Puerto Rican neighborhood barbershop in a Bronx storefront (En La Barberia No Se Llora [No Crying Allowed in the Barbershop], 1994) and a fake domestic crime scene at the Whitney Biennial(Scene of the Crime [Whose Crime?], 1993). His installations are crammed with objects and photos, overflowing with toys and trash and religious ephemera, each piece dense with allegorical meaning. The first thing a visitor encountered was a row of wooden lockers salvaged from Fairhill. Children’s backpacks hung inside them, emblazoned with characters from movies like Star Wars and Teenage Mutant Ninja Turtles. The branding evoked the creeping corporatization of the classroom—nearly a quarter of Philadelphia’s students now attend private charter schools—while grimly driving home the point that these inner city children are more valued as a consumer demographic than they are for their potential to learn.

The classroom’s air conditioner ducts and water pipes were draped in bright and motley fabrics, underscoring Osorio’s intention to make the mechanics of the school system visible. Much of reForm Project’s success derived from the stark contrast between the school system’s lack of faith in Fairhill and the impressive creativity, industry, and self-awareness of the students, so evident in the lively and aesthetically complex installation they made under Osorio’s tutelage.

reForm Project seemed to suggest what an ordinary elementary school classroom might look like if the class and race conflicts inherent in public school education in the US were made visible. Yet Osorio’s installation was also intended to be a place for real learning. The blackboard at the back of the room bore an oversized reproduction of the terse, bureaucratic form letter from the school board informing parents of Fairhill’s closure. The letter’s typeface was exactingly rendered in chalk. It was moving to imagine the Bobcats dutifully transcribing the lesson of their own official redundancy in the current school system. In the context of reForm Project, this letter became the beginning instead of the end of the Bobcats’ story, as the children used the exhibition space to confront the adults who abandoned their neighborhood school. The other walls featured similar oversize reproductions of handwritten essays by Bobcats discussing their love for their former school and their rage at its closure. In the margins, a teacher’s red pen occasionally added supportive comments—“Good work!!!” or “Nice use of adjectives!”—that poignantly brought to mind the support the students have sometimes lacked. Yet the essays were also marked with corrections for grammar and spelling, presenting the students’ protest as an occasion for ongoing learning.

In one corner, tiny figurines representing the members of the School Reform Commission and the city council were connected by long pieces of string that traced their relationships to each other. The result was a pyramid of marionettes, connected all the way up to the state’s governor. School officials were presented as puppets of austerity. Meanwhile, the Bobcats appeared in videos around the room, speaking as if directly to the unseen administrators. Each screen was surrounded by photos of family and friends and other signs of community, forming shrines that were held up by giant yellow pencils. The students were all reading the same text but the videos played out of sync. The moments when voices sounded in unison were all the more affecting for their rareness. It was hard not to root for the underdog Bobcats, led to an unlikely victory by Coach Osorio. When you watch the video of a public event and see that a School Reform Commission official visited and received the figurine made to represent her, it felt like time to cheer as the credits rolled.

What happens next? After hosting months of public talks about Philadelphia’s public school crisis, the exhibition closed in May. The city has no plans to reopen the Fairhill School. Yet the Bobcats have pledged to continue meeting for the next two years. Together with Osorio, the students demonstrated the viability of teacher-student collaboration and self-organized schools run by students. reForm Project thus evokes something beyond the temporary nature of most social practice art. It’s more like the free breakfast programs, free clinics, and free schools once organized in inner city neighborhoods by groups like the Young Lords and the Black Panthers. In a video made for the exhibition, the Bobcats discussed just such a vision of community control of public schools as they constructed on camera a model of a future utopian school that would have “no teachers, only mentors. . .  no metal detectors and guards, but total trust.” In fact, such a school currently exists in Philadelphia, miles away in a wealthier neighborhood on the South Side. On its website, the Philadelphia Free School promises student-led learning and claims that students will “explore freely, think critically, and work collaboratively, across ages, to govern themselves and their school.” Unfortunately for the students of Fairhill, however, the Philadelphia Free School—like most new schools in Philadelphia today—is private.

The 11 Best Beard Trimmers of 2023, Reviewed By Guys With Beards