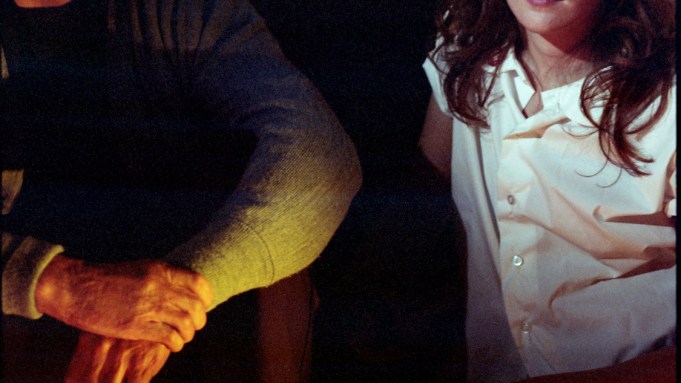 If you could hire someone to control your memory, would you? Perhaps we forget for a reason. Sue de Beer, the 37-year-old artist based in Brooklyn, explores the irresistible, fate-tempting desire to alter the course of memory in her upcoming exhibitions.

From Feb. 3–6, de Beer’s 30-minute video The Ghosts (2011) will screen in one of the period rooms at the Park Avenue Armory. De Beer will supplement the ornately decorated Veterans Room, in a corner on the Armory’s first floor, with plush carpeting and comfortable places to lounge.

This two-channel video is the artist’s first since The Quickening (2007), a trippy horror movie set in Puritan New England about two women chased, and eventually hung, by a masked killer. In The Ghosts, co-sponsored by the Art Production Fund and Sotheby’s, a hypnotist (played by German artist and musician Jutta Koether) retrieves lost memories for three “clients”: a Wall Street money manager, a teenage girl and a record store clerk.

At one point during The Ghosts, the money manager coolly intones, mid-hypnotism: “I have to bring you back, because there is something that I need to tell you… I want to hear you say that you miss me, I want to hear you say that you’re sorry… I will let you come just close enough, so that you can feel it when I leave.” Digging into the folds of one’s memory will unearth feelings of revenge that are best left buried. But according to de Beer, “You never actually lose something. Whatever you’ve seen is there and will come back whether you invite it or not.”

After living on and off in Berlin for a decade, this is de Beer’s first video shot in New York in as long. “In Berlin everyone’s unemployed so you can get everyone in a room for two or three weeks and then you’ve got everything.” De Beer started the script for The Ghosts three years ago, and the film was shot over the course of nearly a year in the artist’s Red Hook studio. The drawn-out schedule allowed de Beer to work with a bigger cast and more elaborate sets than she has in the past, and to make filming adjustments to accommodate a post-recession budget.

Two adjacent rooms at the Armory will house an altered praxinoscope (a French animation machine, not unlike Brion Gysin’s infamous “Dream Machine”), as well as an installation of cutout screens that block and filter light. These components tie The Ghosts to de Beer’s show at Marianne Boesky Gallery in New York, opening Feb. 18. The latter will feature sculptures (including the praxinoscope), as well as a few short videos culled from the “oceans of footage” shot for The Ghosts. As the title elegantly implies, “Depiction of a Star Obscured by Another Figure” uses the viewer’s movement, bright colored lights and perforated screens to orchestrate a mobile DIY eclipse within the gallery. This is de Beer’s first show not entirely dependent on video. If she’s as skilled at creating moody, lush environments in the gallery as she is on a film set, we’re in for a treat.