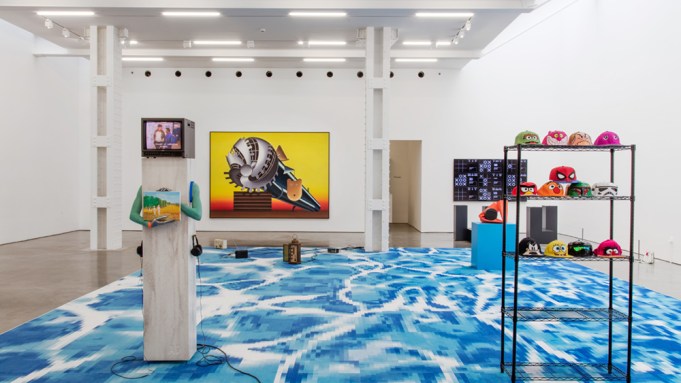 I often wonder if I am in a minority because I enjoy summer group shows, sometimes even more than solo exhibitions. Even if a group show is based on vague connections, it is likely to include at least one artist I can jibe with. I found two such artists at each of three engaging shows now on view in New York’s Chelsea district.

“Difference Engine,” organized by artist Cory Arcangel and Art21 executive director Tina Kukielski at Lisson Gallery through August 7, explores the world of mechanical forms with a surrealist flair. It is an expansive exhibition of seventeen artists with a flamboyant design that highlights a variety of mediums, sounds, and scales. Many of the works are arranged on top of Arcangel’s Water (2008), a giant carpet printed to look like a pixilated lake.

The show’s title comes from the name of an early computing device invented by Charles Babbage, and many of the works engage the Information Age imaginary by juxtaposing technological signifiers with human ones. These contradictions evoke the emancipatory aspirations of the digital revolution belying its dystopian consequences. The unconscious has surely been affected by the mechanical, and, as Félix Guattari writes in his 1979 book, The Machinic Unconscious, “[t]he unconscious itself is an abstract machine; for it is populated not only with images and words, but also with all kinds of mechanisms that produce and reproduce these images and words.”

Jacob Ciocci’s Charging in a Bag (2017) pokes fun at habits of contemporary art-viewing and the limits of acceptable gallery behavior. Custom-made stanchions line the wall, and just outside this barrier sits a posh handbag with an iPhone 5s in a hot pink case peeking out the front pocket. Its cord trespasses the rope to reach a nearby outlet. It is as if a fancy consumer of art has rudely decided to charge her phone at the gallery, perhaps in order to take a cute selfie or share a favorite work on Instagram.

Jayson Musson’s Many Nemes (2009-18), consists of colorful hats lined in three rows on a black-coated chrome steel rack. The hats depict the faces of popular characters: Sponge Bob, Goofy, Oscar the Grouch, Angry Bird, Spiderman, and so on. Musson wore these cartoonish hats (along with diamond jewelry and hip-hop gear) while inhabiting the persona of Hennessy Youngman in his “ART THOUGHTZ” series of YouTube videos (2010-12). This popular online performance project playfully criticized the art history canon using subcultural humor and video-editing antics. The popular characters give the hats an aura of virality; Musson’s costuming was surely just as important as his wit and knowledge to the success of his series.

“This Is Not a Prop” at David Zwirner’s 19th Street location through August 3 includes fourteen artists and explores the liminal space between body and object. The title riffs on Magritte’s famous The Treachery of Images (1928–29), which shows a painted pipe and the words “Ceci n’est pas une pipe” (“This is not a pipe”). The artworks at Zwirner suggest a treachery of objects. Most sculptures are props of sorts, if you think of galleries as stages for the art market. So if these objects aren’t props, what are they? Are they things that exist beyond the self-contained narratives created by artists, in the “real” world of functional items?

One room features “Brothers and Sisters” (2018), a series of sensitive and allusive sculptures by Gordon Hall. The pieces sit low, and as viewers look at them, their bodies move around the sculptures, as if performing in a choreography of bent waists and necks. Fold (II) is made of several layers of hand-dyed cotton. Its dark shape suggests a portal leading to the underworld. Brother and Sisters (II) is a small staircase-shaped sculpture made of cast-pigmented concrete; its compact geometry joins the floor and the wall in a very satisfying way. Digits is made up of five light orange pieces of wood of equal length and distance from each other. This sculpture’s matter-of-fact expression of a number gives weight to an abstract entity.

Alex Da Corte’s video Slow Graffiti (2017) is a shot-for-shot remake of Jørgen Leth’s short film The Perfect Human (1967). While the Danish director put a man and a woman in a white room and had them exemplify ideal human behavior, Da Corte replaces those characters with actor Boris Karloff in and out of makeup for his breakout performance as Frankenstein’s monster in the 1931 movie. Da Corte stars in the video, playing both Karloff and Karloff-as-monster with convincing prosthetics and costumes. Sentimental music plays while the monster reluctantly eats, sprays aerosol paint on himself, trims his nails, and curls up in despair. Quotidian objects like brooms, bread, Christmas ornaments, utensils, and cigarettes are transformed into symbolic props that relate to emotions and powerful human hardship. The film balances the pop colors that decorate the consumer products with formal restraint—Da Corte uses the same white backgrounds as Leth did—to achieve a memorable gravitas.

“The Changes Wrought” at American Medium through August 18 examines the suspension of events, cementing moments in time in order to create objects with metaphorical and prophetic potential. This group exhibition, which includes seven young artists, offers a more focused viewing experience than the group shows at the larger, more established galleries.

Exo Womb (2018), by the duo Loney Abrams and Johnny Stanish, is a kinetic sculpture made out of resin, latex, plastic, mineral oil, rope, human hair, and stainless steel. It depicts an artificial uterus with a robotic baby inside that twitches and comes to life. The purple womb is covered with embossed double helixes, as if carrying the genetic instructions for the development of the embryo, to explore the hypothetical possibilities of controlling a child’s DNA. There are even angel wings in relief on the sculpture, conflating scientific synthesis with heavenly life.

Sydney Shen’s Vox Aranea (Here Rests Syd), 2018, is a medicine cabinet that doubles as a reliquary for the remains of the artist’s deceased pet spider. On and inside the cabinet are newspaper clippings of hospital patients, electric organ hardware with musical notation, a belt from what the checklist describes as a “punitive garment,” and mirrored flower-shaped buttons. Shen’s cryptic sculpture captures a moment of passing with gothic lyricism.

These works allude to the body in relation to the world around it, and to the technological and emotional effects of objects, machines, and events. A lost pet becomes holy, a phone-obsessed spectator becomes a light-hearted joke, unassuming forms take on personas and come to life. Artists are offering fresh and exciting ways of grappling with familiar themes. It is a good sign for the season to come.