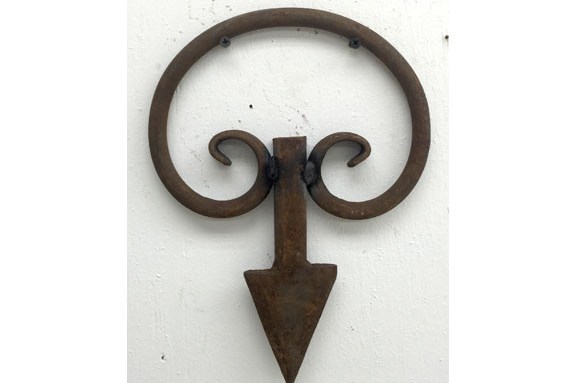 Summer is short and busy in the artful Hamptons. Now more than ever, there are high-quality galleries, sophisticated museum shows, performances, temporary exhibition spaces, pop-up events, and charity benefits—all to entice visitors away from beach and food. Herewith is a not-so-random yet in-no-way-comprehensive sampling of what this summer has been serving up.

The real game-changer out on the East End has been the Parrish Art Museum, which has captured new and old audiences with historic shows derived from its American collection, including Arthur Dove and William Merritt Chase, and with exhibitions of modernists like Jackson Pollock, Lee Krasner, Willem de Kooning, Larry Rivers, Jane Freilicher, and Roy Lichtenstein. And let’s not forget the shows of contemporary Hamptons’ stalwarts such as April Gornik, Cindy Sherman, and Dorothea Rockburne.

The current Parrish show (on view through October 16) is “Unfinished Business: Paintings from the 1970s and 1980s” starring Eric Fischl, Ross Bleckner, and David Salle, painters whose work continues to innovate the medium. There are also concurrent new media shows and others dealing with social and political issues. An elegant and moving performance by Jonah Bokaer took place in late July in the meadow outside the museum to accompany the Brooklyn-based, half-Tunisian artist’s installation of drawings and photos (up through October 16) inside the galleries. His performance, titled The Disappearance Portraits, addresses human migration and is part of the Parrish’s “Platform” program, focusing on a single artist each year.

The Pollock-Krasner House and Study Center in the Springs area of East Hampton shows, besides its namesakes, other artists associated with the region. On view through October 29 is “Innovation and Abstraction: Women Artists and Atelier 17,” featuring experimental graphics by prominent artists such as Louise Nevelson, Louise Bourgeois, and Dorothy Dehner, who worked in master printmaker Stanley William Hayter’s legendary Atelier 17 studio. The show will travel to the Zimmerli Museum at Rutgers University in Newark in January.

Across the street on Springs Fireplace Road is the Fireplace Project, among the hipper art venues in the area. Through August 15, the Fireplace Project is presenting two parallel solo shows by married couple Maia Ruth Lee and Peter Sutherland. Edgy works like Sutherland’s Kingsford (Long), 2016, a wooden bench with UV-printed images of raging flames warning of unanticipated threats in everyday life installed on the back, and Lee’s wrought-iron wall sculptures resembling tools and/or glyphs culled from a dictionary of symbols, are unexpected and engaging. Climb the ladder to the office-attic space of the gallery, and you’re likely to find an enticing mélange of artworks such as, recently, a small navy-blue study by Ross Bleckner of a lone hummingbird smack in the middle of a canvas. Intense.

Across Newtown Lane is the relatively new—and quite cutting edge—Halsey-McKay gallery, which exhibits young Brooklyn artists and specializes in lively, imaginative abstraction. On view from August 13 to 29 is “Shapes,” curated by Ellie Rines, including work by Graham Collins, Mary Heilmann, Sadie Laska, Matt Rich, Keith Sonnier, and Blair Thurman; and a separate show of gestural abstract painting by Patrick Brennan.

Eric Firestone Gallery, down the same street, is always filled with an eclectic assortment of works, from Rob Wynne’s eccentric glass mosaics, to sculptures and installations by the likes of Miriam Schapiro, Kenny Scharf, and Sanford Biggers.

In an alley off of Main Street is the long-standing Vered Art Gallery, featuring modernist contemporaries such as Wolf Kahn and Milton Avery as well as Frank Stella and Helen Frankenthaler. Right now, there’s an exhibition of new works by sculptor Colin Christian (through September 8). Vered’s strong-minded partners, Janet Lehr and Ruth Vered, are also the powers behind the controversy over Larry Rivers’s massive sculpture Legs, installed outside the dealers’ house on Madison Street in Sag Harbor. The piece was the subject of a State Supreme Court battle over public art on private property. Lehr and Vered lost the case in 2008, but the dispute subsided, and the sculpture remains in place.

Just north of East Hampton is the LongHouse Reserve and sculpture gardens, the creation of design maven John Lenor Larsen, a textile designer, collector, landscape architect, and promoter of all manner of art and crafts. The astonishing gardens are populated by twentieth- and twenty-first-century sculptures by everyone from Dale Chihuly and Buckminster Fuller to Kiki Smith and Lynda Benglis. And don’t miss Yoko Ono’s huge white concrete chess set.

Not, of course, to be forgotten is Robert Wilson’s ever-in-the-news Watermill Center, with its eight-and-a-half acres of landscaping and installations of extreme quirkiness. Check in on August 14, when the center is open to the public, and meet the artists participating in the program and witness their installations and performances, which often include nudity.

The Hamptons art scene is no longer an interior designer’s shopping mall. Wherever you look, even year-round, you can find brainy, sometimes provocative art, enough to keep you out of the sun—for a little while at least.