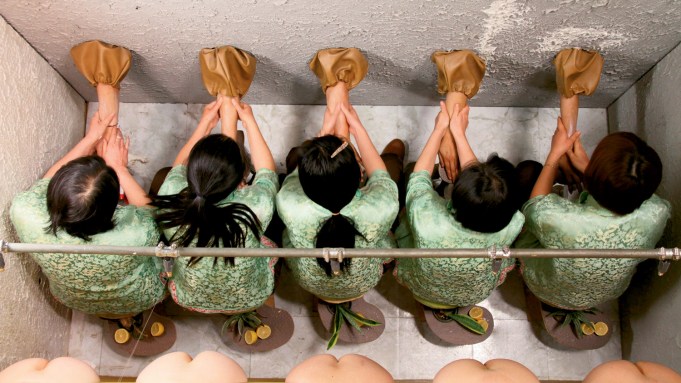 PERFORMA, THE New York performance art biennial now entering its fourth installment, is known for pushing artists out of their comfort zones. The heart of the festival, its series of “Performa Commissions,” often engages artists who have never before worked in performance.

As part of Performa 11 Mika Rottenberg and Jon Kessler are not only making their performance art debuts but also collaborating with each other for the first time. They will be one of only two artist teams to present a Performa commission. (The other is the longtime duo Elmgreen and Dragset, whose project Happy Days in the Art World—a satiric mash-up of Beckett’s play “Happy Days” and the journalist Sarah Thornton’s book Seven Days in the Art World—will kick off Performa’s three weeks of events.)

Rottenberg and Kessler’s piece, titled SEVEN, is described on Performa’s website as “a chakra sauna channeling chromatic bodily fluids from New York to the Cradle of Humankind in Africa.” As Kessler wryly notes, those geographic parameters demand “a suspension of disbelief”— as might the New Age spirituality, for some observers. (Chakras, according to Hindu and Buddhist belief, are centers of energy within the body.)

From Nov. 3 to 19, viewers entering the gallery (Nicole Klagsbrun’s project space on 24th Street) will see a mix of sculpture, live performance and prerecorded video. The process they are meant to witness goes some- thing like this: Seven performers, one for each of the body’s chakras, pedal on stationary bicycles in a heated room. The sweat they pro- duce is captured and converted by distillerylike equipment into a colored liquid, or “chakra juice,” which is then sent to Botswana (or so it will seem in the video, which makes use of footage from a trip Rottenberg took to Africa).

In exchange, clay from the Kalahari desert is transferred to New York, where it appears to fuel the contraption that makes the chakra juice. Thus, a trade route connecting Africa, the birthplace of humanity, and the financial capital of the world is born.

SEVEN sounds a lot like one of Rottenberg’s video installations: a playful microcosm of the global economy, with an emphasis on spa-like rituals. “Squeeze,” her well-received show at Mary Boone Gallery last year, used nail salon-style hand massages to posit a link between an iceberg lettuce farm in Arizona and a rubber plant in Kerala, India.

SEVEN BEGAN WITH an invita- tion to Rottenberg from Performa’s founder, RoseLee Goldberg. “Whenever I’ve seen Mika’s work, I’ve wanted it to be even more visceral,” Goldberg told A.i.A. “She works in a roundabout way, pulling you into the mechanics of life with some fantastical story.”

Over the past two years, Rottenberg thought about experimenting with performance. But the idea didn’t gel until she brought in Kessler, her former professor at Columbia’s School of the Arts. (She graduated in 2003, and the two have developed a collegial friendship.) His sprawling, kinetic sculptures pervert war machinery and surveillance technology to create an atmosphere of spectacular paranoia. His installation The Palace at 4 a.m., for instance, at P.S.1 Contemporary Art Center in 2005-06, used more than a hundred monitors and an assortment of whirring gadgetry to evoke a manic war room. It’s not hard to see how Kessler’s art complements Rottenberg’s, offsetting what he calls the “populist, joyful, exuberant” mood in her work even as it reinforces some of her social and economic criticism.

Together, over many coffees, they developed the chakra sauna con- cept. “Everyone I know is either on a cleanse or on their way to yoga class, or constantly metering and monitoring their caffeine/anti-anxiety pill level,” says Kessler. “We’ve become these devices.”

They also decided that Rottenberg would work on the video component of the installation and Kessler would build the sculpture—“all the gadgety, scientific, weird machines that are creating this live event,” he says, calling one an “alchemical furnace.” And the result, says Rottenberg, will have Kessler’s imprint as much as hers: “It’s like walking into one of Jon’s installations, that has my video as part of it.”

Parts of SEVEN will function more or less like a regular show; viewers will be able to visit the space during
usual gallery hours. Performances are scheduled for noon every Wednesday through Sunday for the duration of the festival. Rottenberg says, “It’s like doing a musical. There’s a lot of choreography, and not much room for mistakes. The big question is, how is the real space going to function with the cinematic space?”

Unlike some other Performa com- missions, SEVEN isn’t directly related to the Performa 11 theme, Russian Constructivism. The artist Liz Magic Laser, by contrast, is presenting her version of the agitprop “living news- papers,” theatrical presentations of current events that were once per- formed by Vladimir Mayakovsky and other revolutionaries.

Goldberg points out that viewers might find a tenuous connection to Constructivism in the complex apparatus of distinctly present-day phenomenon: a familiar cycle of “postcolonial giving and taking,” as Kessler calls it. And they may wonder whether they’re witnessing an exchange of chakra juice and clay, or one of humanitarian aid and natural resources.

Of course, it may be hard to see past the dizzying contraptions and hyperactive rituals of SEVEN. The performers will have to endure the equivalent of a frenzied spin class, and have their chakra juices col- lected and processed by a piece of machinery Rottenberg likens to a rotisserie chicken spit.

The 40-minute production will also build to what Rottenberg calls “the climactic moment a perfor- mance is supposed to have.” In the have-to-be-there spirit of Performa, the artists won’t say exactly what that moment entails. When the chakra juice reaches Africa, “something wonderful happens,” says Kessler. “I’d rather not spoil the fun.”

KAREN ROSENBERG is a freelance critic and regular contributor to the New York Times.

Taste Test: You’ll Like This New ‘Cigar Blend’ Irish Whiskey Even If You Don’t Smoke