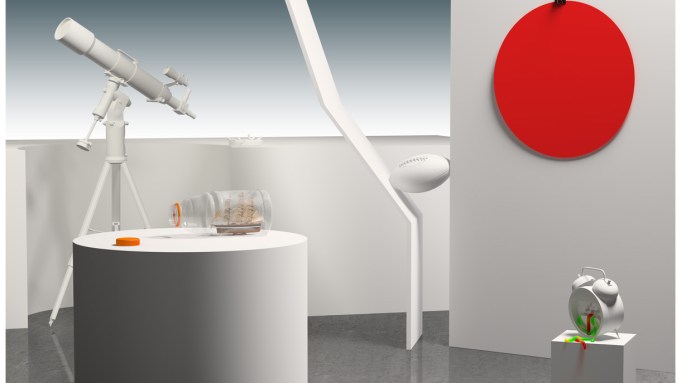 Takeshi Murata’s first solo show at Salon94 Bowery, “Synthesizers” [through Oct. 20], includes seven large-scale photographic prints and a glitchy video portrait of his studio, all created via computer. Born in 1974, Murata is part of a generation with a past in the analog and a present fully lived in the world of the digital. The forward march of technology will surely reframe these works as it has already changed the newly obsolete objects included within them.

“There will be concerns about what I did, or how much human hand is in the work when it’s technology,” Murata told A.i.A. via telephone from his Saugerties, New York, studio. “For these, it’s so much about my hand being in it and working with the tools, and not having the tool define what I’m making.”

Made with a combination of rendering/CG software, though he’d rather not give program names (“Using new technology you can kind of get put into this technological artist category, which I don’t want to be put into at all, even though I am using new technology and new tools.”), the still lifes are arrangements of everyday objects, some presented in great detail and others stripped of their context. In Condos (2012), a keyboard leans up against a complicated cat habitat, reduced to resemble minimalist sculpture. A cup of coffee rests on the instrument, while a shiny ninja sword sits nearby. Shadows, as though cast through Venetian blinds, cut across the space.

At first, these scenes seem eerily empty, too clean, too flat; like a model home that’s never been lived in, or a nightclub before the lights go down. Murata made an effort to make each line as straight as possible, each curve just perfect. “All those things,” he says, “push away from something that’s human, or comfortable to me.”

The result is something that feels hyper-real but is still clearly manufactured, ultra-modern yet kind of retro. Recognizable everyday objects—Apple earbuds, a Gatorade bottle, a stack of Pringles—provide a lifeline to of 2012, while generic objects Murata chooses from online catalogs—a telescope, a chess board, a desktop telephone straight out of Miami Vice-sever that connection.

To create these prints, he uses the computer to set up a virtual 3D environment, modeling each element, or purchasing them pre-made from an online render mall. Then, just as a photographer would in a studio, he lights the space with virtual lights and photographs it with a virtual camera. From there, they are printed like ordinary digital photographs.

The video, a collaboration with Billy Grant and a “different approach to a similar direction”, is a return to Murata’s roots as a pioneer of the data mosh genre. What started as a realistic scan of the artist’s workplace, with carefully rendered objects placed on an office swivel chair, devolves into abstract swirls of pixilated color and motion, with only the occasional recognizable form.

It was through his earlier explorations with video that Murata was drawn to still lifes in the first place. In video, he found a way to bring the viewer into an environment, but even attempts to slow things down couldn’t create the quiet, subtle mood that he desired. He found that stillness in the “strangeness” of computer-generated graphics.

No More Countachs: Lamborghini Is Giving Up Retro-Inspired Models to Pursue Its EV Future