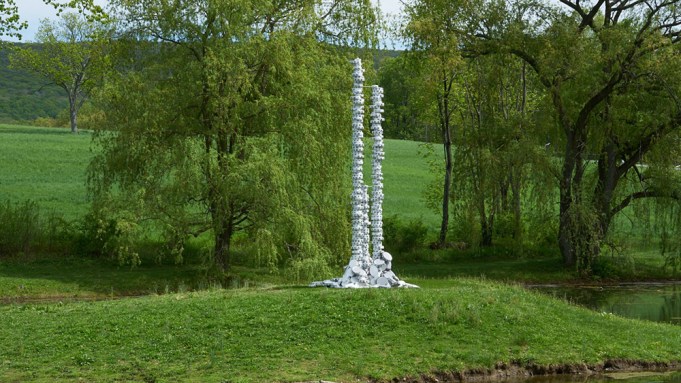 “Sometimes lies are prettier.” The large neon sign throws an ultramarine glow across the floor of a dark room at the Storm King Art Center in Cornwall, New York. Presented as part of an exhibition on climate change, the sign seemed to mock the self-deceptions that numb us to impending ecological catastrophe: that technology will save us, that it is not too late to turn back the clock. In the corner, an upright AC unit struggled and failed to reduce the sweltering humidity. The room was hot. The world is getting hotter.

The blue neon sign is the work of Tavares Strachan, one of seventeen artists featured in “Indicators: Artists on Climate Change,” on view at Storm King—both among the permanent fixtures in the outdoor sculpture park and in the center’s building—through November 11. According to the Storm King website, the exhibition, organized by Nora Lawrence and David Collens, engages with “some of the many challenges—scientific, cultural, personal, psychological—that climate change has brought to humankind.” Several pieces offer an almost whimsical take on the issue, juxtaposing palm trees, a weather station, and other objects with the park’s manicured grounds to bring home the uncanny nature of apocalypse. Other works use documentation of scientific exploration and research for aesthetic effect or to gain insight into how we arrived at this juncture. All of the artists, however, are clearly struggling with the problem of articulating the gravity of the crisis.

Storm King is an appropriate place for an exhibition about climate change. Glaciers shaped the surrounding rocky landscape, carving out the valley as they moved through some fifteen thousand years ago. The center was founded in 1960 to exhibit large-scale outdoor artworks, and the monumental pieces that dot the sprawling 500-acre grounds gesture toward long stretches of time. Hulking metal sculptures by Alexander Calder, Richard Serra, and Mark di Suvero emerge from the trees like ruins of an ancient civilization. What better place to contemplate the end of the world?

Maya Lin has several pieces in the exhibition, as well as permanent works on the grounds. The Secret Life of Grasses (2018), an installation for “Indicators,” features a collection of clear ten-foot tubes standing upright, supported by wooden struts, and filled with dirt. On top of each grows a different species of wild grass, its root system reaching down the full length of the tube. They look like core samples—cylindrical cuts of the earth drawn out to reveal what’s below—or the last remaining specimens in a future stripped of biodiversity and arable land.

Beyond Lin’s piece, several palm fronds peek above the crest of a short steep ridge, jarringly out of place among the native deciduous trees. Mary Mattingly intended this sense of dislocation with her living installation Along the Lines of Displacement: A Tropical Food Forest (2018). Three palm trees—a Paurotis, a Ponytail, and a Coconut—transplanted from a nursery in Homestead, Florida, stand together to form a strange, miniature tropical forest. Mattingly said in an interview that “the piece uses the language of an architectural folly to construct something that’s uncanny and out of place.” It raises the specter of climate migration for plants and people alike, suggesting that any resilience strategy will have to be drastic.

According to a New York State environmental report, climate change will raise the median temperature of the Hudson Valley by six to eleven degrees Fahrenheit by the end of this century. This increase will transform Storm King’s environs into a subtropical zone, perfect for the trees Mattingly planted. Homestead, however, will be underwater, along with most of coastal Florida.

Along with plants, the Arctic serves as a recurring motif in the exhibition. One of Lin’s other contributions is a pair of white topographic reliefs of the North and South poles: 59 Words for Snow and Before It Slips Away. Strachan’s work, in the same room as his blue neon sign, documents his 2013 trip to the North Pole. Strachan followed the route of the 1908–09 expedition to the North Pole taken by Matthew Henson, an African American man who accompanied famed explorer Robert Peary on several missions but was largely written out of history. In a long, narrow lightbox that spans half of the wall and turns the corner, an illuminated image shows Strachan standing in an ice-bound landscape. Next to him, a black, gold, and turquoise flag is planted in the ice, a reinterpretation of the flag from Peary’s expedition.

Ellie Ga’s work in a nearby room also derives from a trip to the Arctic. In 2007, Ga spent five months in residence aboard the research vessel Tara, accompanying a scientific expedition to study how global warming affects pack ice. Sliver-gelatin prints of ghostly shovels and explorers in the snow hang beside a hand-drawn map from the expedition that collates her crewmates’ descriptions of the ice around the ship. These collections not only represent voyages into icy, inhospitable climates but also engage with the underlying imperialist drive behind scientific exploration—the ruinous desire to quantify and conquer the planet for extractive value.

Perhaps the Arctic features so prominently in the exhibition because it is where climate change is most readily visible, in the glaciers breaking apart and melting away. One of climate change’s most intractable qualities—perhaps the one that will ultimately seal our fate—is the difficulty of conceptualizing it due to its scale and complexity.

The philosopher Timothy Morton coined the term “hyperobject” to describe phenomena that are “massively distributed in time and space relative to humans.” Climate change is Morton’s hyperobject par excellence. It is an enormous network of causes and effects distributed across time and geography. Individuals understand that climate change exists but have trouble locating themselves in relation to it. We recognize its extreme symptoms—a hurricane, melting glaciers, wildfires in California—but not its mundane trappings, like an AC unit, a supermarket, or a plane traveling across the sky. Climate change is so embedded in the infrastructure of modern life that it is all but invisible.

Art would seem well suited to represent this intangible object in comprehensible ways, to bring this “embeddedness” to the fore. But it often falls short. Several pieces in “Indicators” endeavor to convey messages in an activist manner. One such attempt is a gold-gilded electronic road sign by Justin Brice Guariglia that blinks out aphoristic environmental warnings (written with Morton) like “DANGER: ANTHROPOCENTRISM” and “WARNING: HURRICANE HUMAN.”  Another is a series of black-and-white flags by the collective Dear Climate bearing slogans such as “SEE THE SEA LEVELS” or “GO FERAL.” These pieces, however, seem more like a reminder of the ineffectiveness of sloganeering than the crisis at hand.

Other artists in the exhibition instead use emotive visual metaphors to embody our potential losses—to create memento mori for industrial civilization. Jenny Kendler’s Underground Library (2017–18) comprises ten books on climate change from the last five decades that the artist has collected and “biocharred,” or burned slowly in low oxygen to sequester carbon. The resulting jet-black shells offer a haunting elegy to books that have outlived their function. When the exhibition closes, they will be buried on the grounds at Storm King, thus preventing their carbon from entering the atmosphere.

Similarly, for Permanent Field Observations (2018), David Brooks cast thirty natural objects—rocks, tree roots, fungi, parts of a deer skeleton—in bronze and set them next to the originals in the woods that runs along the border of Storm King. In a statement, Brooks writes that the replicas will “act as time capsules” as the weather and environment changes. It is the only piece in “Indicators” that will remain on view after the exhibition closes; perhaps the casts will outlive the art center entirely.

In an exhibition dominated by sculptural objects, it is a video that most eloquently evokes the scale of climate change’s primary cause: the fossil fuel industry. Steve Rowell’s Midstream at Twilight (2016) follows the network of pipelines and overland transport from the Alberta Tar Sands to Chicago and on to the ports of southern California. “Midstream” is oil-and-gas-industry slang for the transportation network that brings petrochemicals to market. Shot by drone from above, the video traces the route in the style of a nature film, tracking natural phenomena so large that only an aerial perspective can make them visually comprehensible. The video has mostly ambient sound but toward the end the title theme from A Clockwork Orange starts to play. It is a synthesizer performance by Wendy Carlos of Henry Purcell’s 1695 Music for the Funeral of Queen Mary. Rowell chose the piece because the original was composed before the beginning of the Industrial Revolution, while the Carlos version was made near its end. The echoing electric harpsichord gives an otherworldly aura to seemingly benign lengths of pipeline, oil tanks, and shipping containers. The effect is hypnotic and terrifying: a sense of what we have collectively set in motion and how hard it will be to reverse.

Conveying the enormity of climate change through discrete objects is the central challenge of contemporary environmental art, if not the single greatest philosophical problem of our era. It may be too late to stop the pack ice from melting or global temperatures from rising, but it is not too late to come to terms with what is happening. The strongest works in the show use temporal and geographic dislocation to bring these unsettling truths into the here and now. This is not advocacy, but rather the visceral communication of reality. Lies may be prettier, but climate change is here. We have to live with it, one way or another.