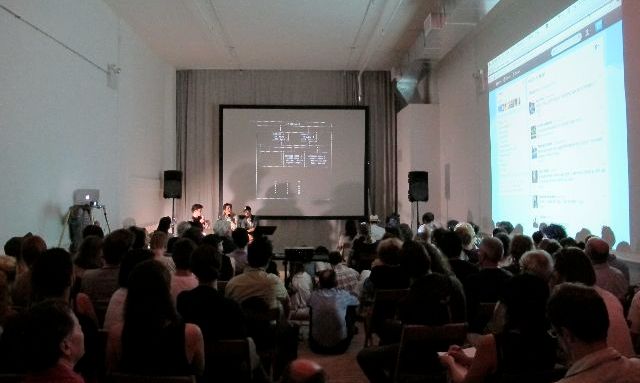 Last week, a standing room-only crowd experienced a delightfully idiosyncratic poetry reading by poet, author and video artist Tan Lin. He didn’t recite the texts—combinations of composed lines, bibliographic citations, and all manner of snippets from text messages, programming languages, gaming, and social media status updates. Instead, the audience read silently as the words appeared projected on the wall. Lin instructed the audience to please keep their cell phones on, as a second projection featuring a live Twitter feed allowed audience members worldwide to comment on the proceedings.

Perfume was in the air, and not metaphorically. Various aromas simulating wet sphagnum peat moss, Glade air freshener, a rose pressed between the pages of a book Lin’s father gave his mother, Banana Boat Sport sun block, and CB Wet Pavement London perfume, among others, wafted through the room, propelled by electric fans; this “perfume soundtrack” (Lin’s words) accompanied the first of his two videos.

Both videos, a 15-minute excerpt from the almost 40-minute-long Bibliographic Sound Track (2012) and the 15-minute The Ph.D Sound (2012) are, in fact, PowerPoint presentations, employing different fade montage techniques, transferred to .mov file formats. The videos, originally Lin’s contribution to a catalogue for an exhibition at Artists Space by Duox (Baltimore-based artists Malcolm Lomax and Daniel Wickerham), can be viewed in their entirety here.

With a poet who didn’t read and an audience that did, while absorbing various sensory stimuli and information, this poetry event quickly turned into an interactive collective performance. It was a fine feeling being ultra concentrated, reading every word and number (of which there were many) with rapt attention, occasional hilarity, and frequent bewilderment. It was equally fine to be distracted: to tune into and out of the text; oscillate between the text and the Twitter feed; and wonder, as you read, what the heck were these particular aromas? Lin excels at expansive poetry that absorbs and recontextualizes information from all sorts of unexpected quarters. He also excels at exploring ways of presenting his poems that go far beyond the printed page: poetry as PowerPoint, as installation, poetry coupled with scents, poetry composed for a blog, etc.

Such presentations, as Lin said in a question and answer session midway through the event, possess elements of cinema and involve an inquiry in presentation and narrative: packaging information, maintaining attention, offering a thesis, convincing an audience, and ruling the day with snappy concision

Bibliographic Sound Track does the opposite. It’s long, sprawling, non-hierarchical, and it baffles as much as it convinces. Composed and found words are treated with equal validity. Rather than communicating a cohesive message, this PowerPoint presentation communicates all sorts of peripheral, tangential, and perhaps even accidental themes. Text assembles from top to bottom, but also from bottom to top, and sometimes sideways. Barraged by letters, words, numbers, and symbols, you give yourself over to the flow and drift of information and to the slowed down, ever shifting visual display of words and numbers, all of which results in a surprisingly meditative, even trancelike experience.

Sense and nonsense combine, yet even at their most absurd level Lin’s poems tend to have a sneaky profundity.  “I am mailing an application to HF in R1,” whatever that is, is followed shortly by, “I am devoted to post office/macrame/and resolve;” a detailed list of things surrounding Lin in his home office (including a Powerbook G4, porcelain letter opener, table lamp, and drinking glass), and cryptic words culled from who knows where on the Internet, such as “fog override,” “log message allow sickness/camfeed pitch,” “sauna box,” the ominous “no heartbeat,” and “max speed 2048],” and that’s just one small part of the whole work.

In Lin’s The Ph.D Sound, what should be excruciatingly boring—namely bibliographic citation after citation is peculiarly riveting, especially combined with DJ Mosco’s music. Pretty much all that you see are titles, authors, publishers, dates and URLs, anything from How Brands Become Icons: The Principles of Cultural Branding, by D.B. Holt to Plank Girls, an ironic photo essay from the DIS Magazine website. Varying PowerPoint slide colors, fonts, and font sizes in eclectic ways, Lin succeeds in making this copious “dry” material captivating and evocative. The citations suggested a tremendous array of data, which is not immediately available, while DJ Mosco’s music made everything feelenergetic and fraught. The last few PowerPoint slides are filled with the crazy hash of symbols, letters, and numbers resulting from an unsuccessful attempt to migrate a document from one software to another: poetry as an incomprehensible mishmash.