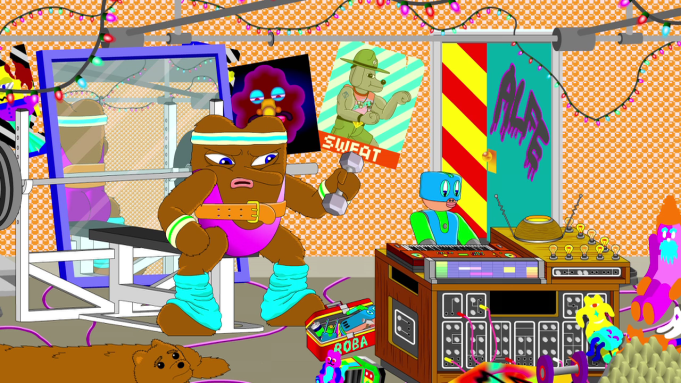 All of the art collectives Ben Jones has been involved in—most visibly Paper Radio with Christopher Forgues and Paper Rad with Jacob and Jessica Ciocci—have been characterized by a weird mix of punk sloppiness and obsessive attention to detail: their cartoons, drawings, and animations feature bright primary colors, geometric shapes, and characters so densely layered on the page that it’s often difficult for the eyes to adjust.

This isn’t the most disorienting thing about the work of these collectives. In addition to the busyness of the compositions, their output frequently features variations on recognizable characters from ’80s and ’90s pop culture: Gumby, Miss Piggy, Troll dolls, the Simpsons, Batman, and so on. The rendering of these characters often comes pretty close to resembling the originals but is just slightly off, so that it can be hard at first glance to figure out exactly what’s different about them. Their work involves other characters too, which seem familiar, like they might have been pulled from long-forgotten and vaguely psychedelic children’s television shows, but are inventions of the artists.

Maybe there was a time in which this kind of work would have felt like a détournement, but that time has passed. Today culture jamming feels too intuitive to signal an inversion of norms or values. The corporate entertainment industry is already saturated with endless sequels and reboots which reimagine—sometimes reverently and sometimes perversely—familiar characters. And while these Hollywood blockbusters are the most obvious example of such cultural recycling, the trend is also ubiquitous in video games, TV shows, comic books, and novelizations (which remain, perhaps surprisingly, a thriving genre). Moreover, there’s an active bottom-up online culture that includes fan fiction, web forums, and fan videos on YouTube.

Alternate versions of cultural characters and motifs are so continuously present that they don’t spark nostalgia anymore. Upending culture has become a recognizable and legible phenomenon: we endlessly juggle familiar signifiers as a way of relating to a world that is both constantly in flux and highly repetitive, in which slightly tweaked narratives are continually retold and resold to us.

Which is why it makes perfect sense that Ben Jones has maintained a parallel career (not really separable from his art-making) as a cartoonist and humorist, writing and directing animated shows for the Cartoon Network and FXX. “The Problem Solverz,” his first show, aired in 2011. It revolves around Alfe (voiced by Jones), Horace, and Roba, a group of amateur detectives. The opening sequence frames the plot in comically vague terms: “Ever since the late Stone Age, there have been unique individuals who solve problems. This is the story of three such heroes.” Indeed, the “problems” the characters encounter are not really mysteries, but madcap schemes: a sticker-happy street artist uses magic stamps to mail a town into another dimension; a bad cat named Badcat, who operates a “board-game casino,” has stolen massive amounts of salsa in order to sell it back at a profit; a video game’s artificial intelligence has infiltrated all computers so that everyone is becoming addicted to it, playing until their heads explode.

The plotting, as you might expect, is disjointed and whacked-out, though it maintains a sort of internally consistent associative logic. In the episode about the street artist with magic stamps, for example, the characters are mailed to a two-dimensional universe that they can only escape by emailing themselves back into the three-dimensional world. Even though the episode playfully addresses the way that information travels quickly and non-linearly in a world in which the analog and digital have become completely intertwined, it doesn’t come across as fetishizing this condition. If anything, the characters inhabit such a world fluidly and without wonder; they are more concerned with the nefarious schemes of the villain than by the technological novelties they encounter. After all, new technology is usually only a slight variation on an already familiar technology, and this is exactly the condition of the characters themselves. So why should they be surprised?

But the real star of “The Problem Solverz” is the animation, and in particular the backgrounds. Often plots seem primarily designed to situate the characters in bright and highly detailed flash animation settings. When our heroes play a video game, the screen is full of movement and color, and the walls behind them are covered in flashing graphics. When they go to an amusement park, each frame is saturated with neon, and the rides are almost abstract, spinning and moving in patterns that are more geometric than referential. These backgrounds are far more overwhelming than the narrative discontinuities, which seem mild by comparison.

Jones’s second show, “Stone Quackers,” premiered in 2014. It’s less kinetic that “The Problem Solverz,” but just as detailed. It has the same attention to backgrounds, but the palette uses pastels, and the primary colors are juxtaposed with softer, more impressionistic settings. The protagonists, a pair of best-friend ducks, are more recognizably “cute,” and the writing more self-consciously adheres to the genre of cartoon comedy: the plots are not overwhelmed by the visuals, and the timing of the jokes is not quite as off. That said, there’s something about “Stone Quackers” that’s stranger than “The Problem Solverz.” For one thing, it can feel melancholic, and there’s far more character development, albeit of a limited sort: for instance, characters sometimes end up kissing unexpectedly, in a way that suggests there are repressed feelings.

Jones’s work (including Paper Radio and Paper Rad productions) has always rested on a certain kind of technical virtuosity: the virtuosity of reproducing generic tropes (both visual and narrative) inexactly. The reason that this doesn’t feel like merely a clever exercise in style, an eggheaded exercise in critique, or an anti-authoritarian exercise in impishness, is that audiences have already warmed to cultural inexactitude. Punk appropriation is comforting in its earnestness, and big-budget remakes are exciting precisely because they deviate from the originals, encouraging audiences to update their relationships to the characters they know and love.

Moreover, the technique of reproducing and referencing cultural material is itself a sophisticated form of comedy: what’s funny about a contemporary parody might not be the difference between it and the original, but simply the range of allusions it employs. This may have been an innovation for “The Simpsons,” but in recent years it has become the norm in cartoons for adults. It’s now common for both animated and live-action comedies to ground their humor in fast-moving references to other cultural products. And frequently, the references are the extent of the jokes. A commonplace definition of comedy suggests that it involves the upending of logic, and in this case coherence is overturned simply by pointing to the overwhelming heterogeneity of popular culture.

“Stone Quackers” embraces this situation with a deliberate sweetness and lack of cynicism, both in the animation’s soft, muted colors and the genuinely bittersweet storylines about friendship. It seems like Jones knows that appropriation doesn’t feel punk anymore. But instead of giving up on his style, or changing his practice entirely, he’s treating his audience’s affective relationship to cartoons slightly differently. After all, the audience for “Adult Swim”-style shows identifies with and expects disorientation. And the most disorienting thing about “Stone Quackers” is that it doesn’t frenetically pervert popular culture. Instead it revolves around tenderly drawn and relatable characters, which, in the context of Jones’s work, is its own kind of subversion.