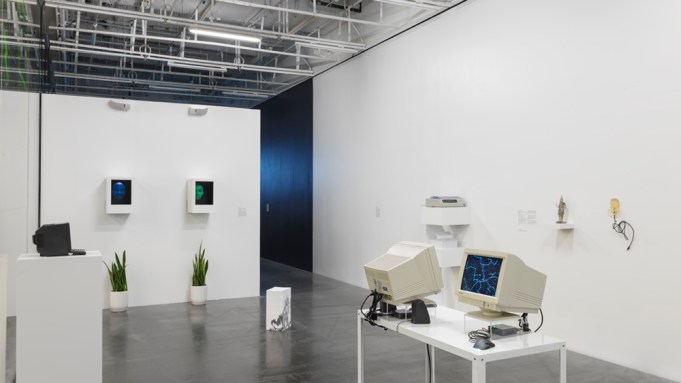 In Simple Net Art Diagram (ca. 1997), an animated GIF drawn by the collective MTAA, a red lightning bolt blinks at the middle of a cable connecting two computers. The flashing bolt is labeled: THE ART HAPPENS HERE. Art, according to MTAA, does not reside in an object, nor is it an ephemeral experience of something passing across a screen. It is not what the viewer perceives, but the conditions that make that perception possible.

MTAA’s diagram—reproduced in green vinyl, without animation—graces the glass setting off the gallery in the lobby of New York’s New Museum, where “The Art Happens Here: Net Art’s Archival Poetics” is on view through May 26. The exhibition of sixteen artists and collectives marks the culmination of the Net Art Anthology, a two-year project by Rhizome, a New Museum affiliate, to compile an online compendium of internet art made from 1985 to 2016.

Last year I wrote about “internet shows,” group exhibitions that announce their subject as “art and the internet,” a fog of a topic that all too often shrouds sloppy curatorial work. The conjunction of two vast categories—art, the internet—gets leveraged as an excuse for showing trendy artists making remotely related work, for giving a museum’s programming a fresh and relevant look. In that essay I singled out Rhizome’s Net Art Anthology as a positive example of an institutional project. It is unique in its focus on the internet as a medium for art rather than a theme for an exhibition—as where the art happens, rather than as something happening in parallel to the art. In showcasing diverse approaches to internet art over three decades, Net Art Anthology is also a compelling proof of concept for Webrecorder, a preservation tool that records and restages websites to keep their interactive elements live, rather than saving screenshots as other digital archiving technologies do. On the Net Art Anthology site, Webrecorder shows historical works of net art as they originally appeared, emulating vintage versions of Netscape and other obsolete browsers. This adds a historical specificity missing from internet shows, which highlight formal similarities between new works and ones from the ’80s and ’90s, brushing aside the context in which the older art was made. When “The Art Happens Here” was announced last fall, not long after my article was published, I wondered if had spoken too soon. Could the project survive the translation to the gallery?

I think it does. “The Art Happens Here” is an exhibition about archives, about the problems and possibilities of preserving digitized information and aesthetic experiences when interfaces and hardware are constantly changing. The curators, Michael Connor and Aria Dean, were clearly unconcerned with making the show look contemporary; it doesn’t have any of the slick CGI, Oculus headsets, or other aggressively of-the-moment elements that characterize internet shows. Instead, there’s Eduardo Kac’s Reabracadabra (1985), a crisp, RGB linear animation on a neat little CRT monitor. Alexei Shulgin’s 386DX (c. 1998) is a playlist of pop songs performed by a text-to-speech program on a grimy beige computer. The rig is installed with a basket of change and a rainbow-colored umbrella—souvenirs of the work’s previous appearances as a robot busker on the streets. Lungs (2005) by YoHa (software artists Graham Harwood and Matsuko Yokokoji) is a memorial to the prisoners who worked in a munitions factory during World War II in Karlsruhe in a building that became ZKM Center for Art and Media, where YoHa’s work was originally displayed. Gray text on the black screen shares biometric profiles of the enslaved laborers, including their lung capacity, a figure used to generate synthetic sounds of breathing that emanate from two tall speaker towers flanking the monitor. (Perhaps it’s worth mentioning that the computers pictured in Simple Net Art Diagram look like square Macintoshes.) The historically accurate equipment used to display these works—the gently curving screens, the chunky beige and black casings—will remind many viewers of computers they used at various points in their lives. Yet the presentation doesn’t feel nostalgic; it’s more like a matter-of-fact reminder that technology is historically contingent, that its manifestations shift with market developments. There’s a feeling of curatorial play to the negotiations with the past; even the recent works included have something old about them. Morehshin Allahyari’s Material Speculations: ISIS (2015–16) is a series of 3D prints of ancient artifacts destroyed during conflict in the Middle East: idols to Assyrian gods, rendered in translucent polymers.

But the most over-the-top engagement with anachronism comes in Olia Lialina and Dragan Espenschied’s presentation of One Terabyte of Kilobyte Agea project archiving homebrew websites made before Facebook and Squarespace relieved people of the responsibility of making their own homepages. They printed screenshots of webpages on slides, which play in two analogue projectors. The carousel on the left holds unfulfilled promises that a website will be updated (“I’m new here give me some time”), while the right one highlights farewells from amateur webmasters abandoning their pages (“Sorry this page is no more”). On my first encounter I thought this installation tactic was unnecessarily silly—or relied too heavily on mechanical clicks and whirs to give digital matter physical heft—but as I spent more time with it I felt convinced that Lialina and Espenschied had responded sensitively to the way the messages on the websites unwittingly reinforced their own obsolescence, and how the cyclical movement of the carousels inscribes the archive’s stuckness in time.

One Terabyte of Kilobyte Age is installed in the second half of the exhibition, a dark room with black walls that hosts the show’s only other projection (an untitled video by Wolfgang Staehle from 2001 that was originally shown at Postmasters Gallery as a live feed of the lower Manhattan skyline from Brooklyn; the work became canonical when it happened to catch the 9/11 attacks and their smoky aftermath). The works collected here are about dead ends and deletions; the back corner, where YoHa’s and Staehle’s works neighbor each other to give a one-two punch of the Holocaust and 9/11, makes for a somewhat melodramatic conclusion. The black gallery makes a strong contrast to the brightly lit, white one, which showcases pieces about connection and circulation. The two halves add up to a complete expression of the archive’s reality, of forgotten stories and the work it takes to remember them.