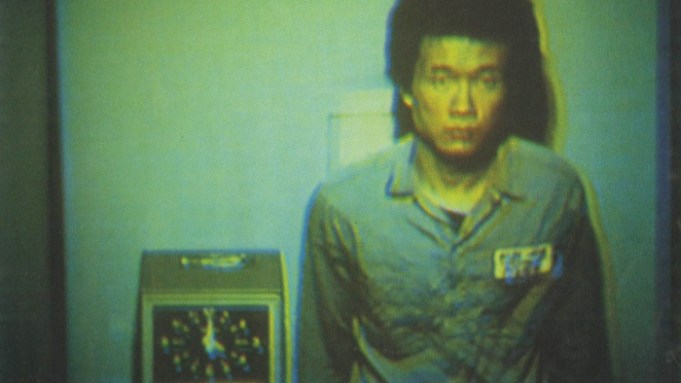 Tehching Hsieh, the Taiwanese native who came to America as an illegal immigrant in 1974 at age 23, was for a period of time a potentate of performance art in New York. In a genre virtually defined by its bias for autobiographical source material, Hsieh made his life and performance works uniquely apposite to each other, in their way functionally synonymous. He didn’t just draw on his life. His life was the performance. There were four yearlong works, beginning in 1978, each one prefaced by a poster announcing his intentions, and describing several conditions that he intended to fulfill. Suppose a friend told you they were going to climb Mt. Everest, gave you times of departure and return, and restrictions laid down on the expedition. Hsieh had such a program, and his life performances were Everest-like. Nobody could imagine setting out to endure such hardships, certainly not for art’s sake.

For his first project, known formally as the Cage Piece, he built a cell in his loft in Brooklyn, then locked himself in it for one year, to the minute, having announced that he would talk to nobody, take nothing to read, no radio or TV, and no writing material’s for the year’s duration. An assistant, with whom he exchanged no words, appeared everyday to bring food and dispose of wastes. Hsieh’s simple yet rigorous documentation of the ordeal, carried out just as meticulously in his three succeeding yearlong events—proof of time spent and conditions observed—were recently on view in a kind of retrospective at Jack Tilton/Anna Kustera Gallery.

Four mounted C-prints and six ink-on-paper silkscreen reproductions of posters lined the gallery walls. Hsieh also appeared in person three times to show excerpts from the DVD he made in 2000, an impressive Green Box-like summation of the work he did between 1985 and 1999, and to answer questions. From 1985 to 1999 Hsieh really did nothing, artwise, but he divided this period into two works anyway. A fifth one-year performance, 2001 (1985–86), he defined negatively as a year in which he would not make art, talk or read about it, view it or in any way participate in it. He “just went in life” for that year. For his sixth and last work, titled Earth, he abandoned his yearlong format, saying it would last from 1986 until 1999, from his 36th birthday to his 49th, and he might make art during that time but would only reveal what it was after the “performance” was over. At the end, all he said was that he had “kept himself alive” and made it through the new millennium. More slyly, he said he was doing Wasting Time Art, as he now likes to characterize his work.

Such Duchampian lessons would perhaps not be so interesting has Hsieh not previously provoked awe and amazement with several tours de force challenging the limits of human endurance/ When he emerged from his cell in 1979, after a self-imposed imprisonment akin to solitary confinement, Hsieh was, he says, very weak and sensitive, especially to reactions ranging from not being taken seriously to being considered crazy. And he knew he had to do a second work right away. This turned out to be Time Piece, 1980–81, in which he punched a time clock every hour on the hour 24 hours a day, for a whole year. His documentary “proofs” included an observer to verify each day’s time card, and a film produced by a movie camera that shot a single frame every time he punched the clock. Seen on Hsieh’s DVD, the film shows a compression of each day into a second, the whole year into six minutes. Documentation also notes that out of the 8,760 times Hsieh was set to punch the clock, he missed 134 turns, due to getting up too late. The record was marvelous enough; the greater wonder was that he stayed sane despite missing huge chunks of REM sleep.

Next, during 1981–82, he performed the stupefying feat of staying outdoors for the entire year, not even entering a store for food—far exceeding known movements of the normally homeless. In the terrific film footage of this ordeal, Hsieh can be seen on a particular day desperately trying to keep some cops from hauling him into a police precinct. He had gotten into a fight on the street, and the cops had found a weapon on him- an Asian stick. He was detained in police custody for 15 hours, no doubt the worst moment of the year for him, more for having his vow of staying outside broken than for the terror of an arrest.

Hsieh’s fourth one-year event stretched the boundaries of intimacy as he linked—actually padlocked—himself by a 6-foot rope to Linda Montano between July 1, 1983, and July 1, 1984, with the accompanying proviso that they would not touch each other [see A.i.A., Sept. ‘84].

In he mid-‘70s Hsieh was, he says, “frustrated and depressed.” He didn’t know anyone, his English was minimal, and he was hiding from the government. “I was a prisoner in my studio, and felt very isolated.” The Cage Piece, he says, “was a way of making a form for how I felt.” His inactivity as a performance artist after his fourth one-year ordeal suggests that Hsieh has integrated his forsaken state and found friends in America through his heightened public expression. In 1988 Hsieh was legalized through a change in the law creating amnesty, ending a dire aspect of his immigrant status.

People want to know why he doesn’t do art anymore. Is he having a midlife crisis or something? Hsieh says simply, “I’m not finished yet; I’m still alive.” Whatever the future may hold, he has already left a record of some of the most brilliant and original Conceptual work in the field of performance art.

The 15 Best Body Sprays for Women to Wear This Summer

The 30 Best Daily Planners for Staying Organized All Year Long