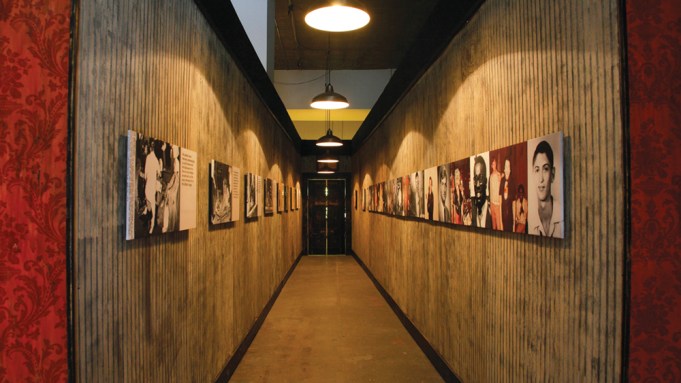 Until recently, the 1973 fire that destroyed the UpStairs Lounge in New Orleans and killed thirty-two of its patrons had been nearly forgotten. The blaze was widely presumed to be arson, likely committed by Roger Nunez, who was kicked out of the French Quarter gay bar earlier that day for hustling. In the days following the incident, sensationalist headlines appeared in local and national newspapers. Police officers and radio show hosts made horrific jokes about the “weenie roast” and burying the dead in “fruit jars.” Governor Edwin Edwards never acknowledged the tragedy, and Mayor Moon Landrieu and Catholic Archbishop Philip Hannan mentioned it only obliquely, following pressure from activists. The fire department, citing a lack of evidence or leads, closed the investigation in 1980, and the incident faded from official memory, although it remains the deadliest fire in New Orleans history, deadlier even than two citywide fires in the eighteenth century.

In 2008, artist Skylar Fein shed light on the event with Remember the UpStairs Lounge, an immersive memorial installation—presented at the Contemporary Arts Center New Orleans for Prospect.1, the first edition of what is now a triennial exhibition—that visitors entered through a cramped hallway mimicking the narrow stairwell through which the flame traveled from the entrance to the second-floor bar. Now, the New Orleans Museum of Art—which acquired the work in 2013—has put Remember the UpStairs Lounge back on view, in “Changing Course: Reflections on New Orleans Histories,” a collection of seven artist projects installed to coincide with the city’s tricentennial and on view through September 16. Works presented along with Fein’s include the Propeller Group’s The Living Need Light, The Dead Need Music (2014), a mesmerizing video exploring parallels between funerary traditions in New Orleans and South Vietnam, and Katrina Andry’s  Diverge Divest Deny (repeat), 2018, an installation of prints looking at how developments like the I-10 overpass, which cut through the Tremé neighborhood in the 1960s, have disregarded communities of color in the city.

Remember the UpStairs Lounge fills a U-shaped space on the museum’s first floor and is equal parts art exhibition, memorial, and history lesson. Fein has installed a short timeline with photographs of the UpStairs Lounge, pre- and post-fire, atop wallpaper simulating the gaudy red damask and wood paneling of the bar’s interior. This somber telling of events is complemented by wood cutouts printed with images related to the UpStairs Lounge and gay life in New Orleans, as well as a group of mesmerizing light-box replicas of signs from other now-closed queer nightlife locales in the French Quarter.

Fein began researching the UpStairs Lounge arson after he encountered a small rectangular plaque, installed in 2003 at the former site of the lounge, commemorating the victims. He wondered why he had never heard about the incident. He began interviewing people who were living in New Orleans at the time of the tragedy, and obtained information and photographs from writer Johnny Townsend, whose book Let the Faggots Burn: The UpStairs Lounge Fire (2011) would become the first published on the subject. Since then, several books—including Robert W. Fieseler’s Tinderbox: The Untold Story of the Up Stairs Lounge Fire and the Rise of Gay Liberation (2018)—and documentaries have attempted to further contextualize the event. Fein’s preservationist impulse is echoed in other art-driven initiatives in New Orleans, like Last Call’s Alleged Lesbian Activities (2016), a theater piece blending fiction and oral histories to revive the memory of the city’s shuttered lesbian bars.

In her review of Prospect.1 for the February 2009 issue Art in America, Lilly Wei lauded the timeliness and relevance of the projects by Fein and others, but said, “One might ask whether these . . . met a strict definition of art.” Fein recalled this detail with pleasure in an email. Indeed, Remember the UpStairs Lounge does at times feel less like a traditional artwork than like a space carved out for reflection and conversation. Parts of the installation appear in disorderly groups, sometimes leaning against walls, and music plays throughout the galleries. The cumulative effect suggests that the atmosphere and experience of the space matter more than the contemplation of the various components. Fein seems to hope that audiences young and old, gay and straight, will be able to look at history, and the present, through a more complex lens.

Instead of faithfully re-creating the interior of the UpStairs Lounge, Fein has conceived what he describes as a “fantasia of gay culture,” to avoid oversimplifying the story of queer life in New Orleans as one of strife and tragedy. He acknowledges the institutional neglect following the UpStairs Lounge fire alongside the seedy joys of gay life—the nightclubs, bathhouses, peep shows, and dirty magazines—at that time. Some of Fein’s wooden cutouts reimagine specific artifacts from the bar, like posters of actor Burt Reynolds sprawled naked on a bearskin rug and swimmer Mark Spitz in a Speedo, his torso stacked with Olympic medals. Other pieces take inspiration from fetish subcultures and the pleasures of gay sex: leather daddies like the ones in “Tom of Finland” comics, a hunky shirtless cowboy, a bare ass. A re-creation of a porn-shop booth plays excerpted recordings of media coverage of the fire. There is one authentic relic from the bar. On loan to NOMA from the Historic New Orleans Collection, a miniature plaster replica of the ancient Greek Farnese Hercules was the only piece of the bar that made it through the fire undamaged.

In the context of the arson, Fein’s interest in fetish culture takes on particular meaning. If divorced from this history, the work might appear derivative of Hal Fischer’s 1977 exploration in Gay Semiotics: A Photographic Study of Visual Coding Among Homosexual Men, a photo book that cheekily deconstructs gay identity through fashion. But in light of the gross institutional dismissal of the UpStairs Lounge tragedy, Fein’s work also reads as a protest. An upraised fist could signify not only a sex act but also a call to action. Hands and feet bound into submission and men in peaked caps conjure up both hypermasculine fetish play and use of force by the police. While Fein is not the first to articulate the visual eroticization of authoritarianism, his exploration feels particularly poignant in light of the way the UpStairs Lounge story was mocked and suppressed.

There is no tidy narrative about the UpStairs Lounge. Following the fire, out-of-town leaders from the Gay Liberation Front pushed to politicize the incident as a gay-rights issue, but many of the survivors were too horrified to be publicly named as queer. And the fact that the suspected perpetrator was likely gay prevents an unambiguous framing of the story as a hate crime. It’s not surprising that the UpStairs Lounge received a flurry of attention following the 2016 attack at Pulse nightclub in Orlando, Florida, where the shooter, Omar Mateen, also purportedly had sexual relationships with men. That massacre, which surpassed the UpStairs Lounge fire as the largest mass killing of gay people in the United States, led to messy conversations around the intersection of homophobia and Islamophobia and the dangers that queer people of color face.

Fein embraces this murkiness instead of shutting it away. And his approach ultimately feels like the right one at this moment, when gay marriage has gained wide acceptance across the US but issues of public health, safety, and representation still disproportionately affect those most marginalized in the queer community. Remember the UpStairs Lounge advocates for complicating the stories we are told, rather than resolving them into mere history, in order to better draw lessons from them.