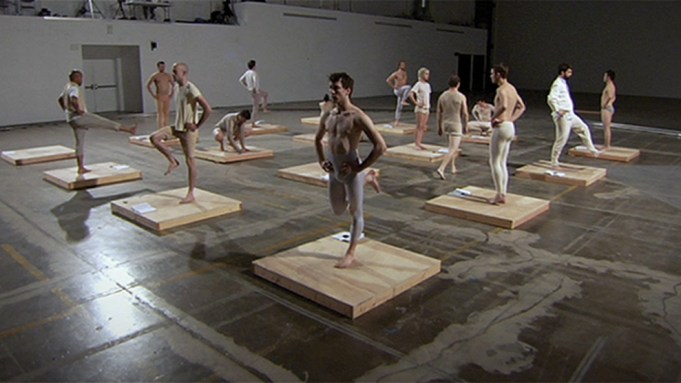 May the ghost of Gertrude Vanderbilt Whitney forgive me, but I really miss Caligula. That is, I wish that the thoughtful but tepid current edition of that impossible curatorial predicament known as the Whitney Biennial contained at least one pulse-quickening phenomenon like Francesco Vezzoli’s faux-porn Trailer for a Remake of Gore Vidal’s ‘Caligula’ in the 2006 show. (I dismissed it back then as merely filling “the arty cineplex slot.” Ah, but what’s life without regret?)

As we’ve all known for ages, the Biennial is a one-stop tour of “What’s Happening Now” (as in the comedian Flip Wilson’s old “The Church of . . . ”), determined by a completely untransparent selection process that’s a combination of Rolodex, word of mouth, personal taste, social networking and trendspotting. This time, the selectors were the international independent curator Francesco Bonami, supplying what gravitas he can, and his 29-year-old sidekick from the Whitney staff, Gary Carrion-Murayari. Sensibly if idealistically, Clement Greenberg advised us (Oops! There go 80 percent of my readers, heading for the exits) to regard works of art as contextlessly as possible (“One at a time, one at a time,” he said to me some years ago). The Biennial is especially vulnerable to our inclination to treat it as a work of art and ask each other, “Is it any good?” (“Thoughtful but tepid,” I reply.)

We also tend to sift through it like homicide detectives do a suspect’s trash bin, looking for clues to a buried position on gender or age and any snotty New York bias against artists stuck outside Gotham or L.A. For the record: in 2010, the majority of the 55 artists are women, a momentous, first-time-ever phenomenon (though little of the work is explicitly feminist). The median artist birthdate is between 1974 and 1975, and—allowing for multiple residences, and exempting Chicagoans and expats currently in Europe from being considered denizens of the boonies—only four artists in the show are geographic outliers. (Nominally, the show remains devoted to American art.)

If I had to tag the exhibition, I’d call it “The MA Thesis Biennial.” Not “The MFAThesis Biennial”—we’ve had plenty of them, goodness knows—but rather a collection of stunningly unromantic research projects by artists who’d apparently rather be comp lit professors at Brown. (Maybe all this changing “art history” departments to “visual studies” programs in our universities is finally bearing dried fruit.) Jesse Aron Green’s video, for example, gets its Trisha Brown-like modern dance content from an 1858 German exercise book; Aki Sasamoto’s rather ordinary-in-Chelsea hanging installation represents (according to the wall text) her “attempt to understand the mathematical structure of the Lorenz Attractor”; Ania Soliman’s info-graphic frieze is based on “research and impressions on the subject of the pineapple”; and Kerry Tribe’s two-channel film dramatizes the actual case of an epileptic whose last-ditch brain surgery restricted his memory for post-operative experiences to briefly held recollections of events no more than 20 seconds old. Finally, the title of Sharon Hayes’s cluttered video installation, Parole, refers (again, according to the wall text) “to the term used by Swiss linguist Ferdinand de Saussure to distinguish individual acts of speech (parole) from a larger system of language (langue). . . . Hayes draws on historical texts—such as early lesbian activist Anna Rüling’s 1904 speech ‘What Interest does the Women’s Movement have in the Homosexual Question?’”

The dispiriting aspect of this neo-academic art is twofold. First, because the end product is not a peer-reviewed tome but rather a work of art exercising all due artistic license for incompleteness, indeterminacy and superficial effect, the research is half-assed. The new answer to the old question “Did you read the book?” is soon to be, “No, but I saw the installation.” Second, neo-academicism tends to render art visually passionless—if not downright soporific. Too much of this Biennial resembles a science fair where half the lightbulbs in the gym have gone out.

The other major thread stitching itself through the exhibition runs in an almost diametrically opposite direction: sheer, naked technique foregrounded so sharply it almost scratches your eyeglasses. Making my way through the Biennial, I kept hearing the voice of a very successful Los Angeles artist saying to me long ago, “Hey Pete, I think I’ve figured out a way to make some paintings.” Not that this sort of crafty opportunism is always bad. One of the highlights of the Whitney show is Roland Flexner’s grid of small drawings made with a variation on the traditional Japanese technique of laying paper face-down on ink that floats on water. Sure, the drawings seem a little too grotto-spooky, but they work. Techniqueyness functions less well, but still tolerably, for Curtis Mann, who uses bleach to distress his color photographs of (from what we can see around the edges of his large grid of them) urban detritus—specifically, bombed-out streets in Beirut. Scott Short takes that design-class standby of photocopying a photocopy practically ad infinitum until an inchoate pattern is obtained; he then projects it onto a canvas and paints it as carefully as Richard Estes would an Upper West Side storefront.

Lesley Vance’s modest abstract paintings are probably too straightforward to think of as homages to technique; plus, they’re nicely composed and unpretentious. But that pop! of her niftily configured brushtrokes against flat, deep brown backgrounds tilts perilously close to gimmickry. In the 2010 Biennial, though, they’re a breath of fresh air direct from 17th-century Spain. Even better are James Casebere’s giant color photographs of his typically simplified-but-painstaking architectural mock-ups, in this instance of a foreclosure-plagued mansionette development in Dutchess County, N.Y. The aerial pictures do a wonderful turn on that perceptual evergreen, the willing suspension of disbelief. With Casebere, it’s more like an unwilling half-belief that you can hear kids playing and can feel the air grow colder as the sun (i.e., whatever kind of artificial light Casebere uses) descends below the tabletop horizon. And although Rashaad Newsome’s video’d vogue dancers are absofuckinglutely terrific, I have trouble figuring out how much credit he should get for the appeal of Untitled (New Way). Newsome invited some of the genre’s stars to his studio, had them bust a few moves for the video record, editedthe footage into a new composition, then had the performers dance it for his camera. Although Newsome might bedeliberately playing with definitions of documentary-making, authorship and authenticity, awarding him auteur status here strikes me as something like giving Ken Burns a medal for winning the Civil War.

The 2010 Whitney Biennial contains the usual abundance of mediocre work, so it’s probably pointless to mention individually all the pieces on my “Eh” list. But a few represent significant curatorial failures. Consider Robert Williams. The L.A. psycho-Pop cartoonist painter is a legend in the kustom kar culture, and he’s held his own in shows with the likes of Ed Ruscha. So what did Bonami and Carrion-Murayari pick from one of southern California’s premier artistic weirdos? A handful of washed-out, surreal social-satire watercolors—images that Peter Saul would reject in his sleep. And somebody—I guess it has to be me—should say out loud that the funniest thing about The Bruce High Quality Foundation is its name. The Foundation’s installation of a white Cadillac hearse/ambulance, on whose windshield plays a mockumentary about America with an achingly pseudo-heartfelt voiceover, collapses under the weight of its multiple, self-canceling ironies.

Neither the Williams watercolors nor The Bruce High Quality Foundation’s installation are truly awful, just disappointing. For genuinely bad, let’s turn to Tauba Auerbach, Marianne Vitale and—to my own shock and awe—the estimable Charles Ray. Auerbach simply rips off the late Ken Showell’s paintings, which were made by spraying folded canvas, then stretching it in rectangles to obtain a trompe-l’oeil surface. Where Showell’s paintings possess at least some optical pizzazz, Auerbach’s emit only a misplaced somber pride. And if you’re going to get yelled at via a monitor by an ostensibly wicked parody of Big Sister, it should be with a more pointed spoof premise than promoting “neutralism”—and by a much better actor than Vitale.

The biggest gaffe in this Biennial, however, is devoting an entire gallery—the largest in the show—to sculptor Charles Ray’s large, vapidly psychedelic, Marimekko-ish paintings on paper of imaginary flowers. Now, Ray is one of the best artists around, and has single-handedly enlivened more than one Whitney Biennial. But why do these intricately silly and surprisingly joyless pictures deserve all this unencumbered space? Elsewhere, artists with wall work are confined to segmentsof walls, and they share their galleries with sculptors’ art on the floor. Even Nina Berman’s photojournalist essay on the wedding and home life of a horribly disfigured Marine veteran of the Iraq war is squeezed—tastelessly—in its small room by Jessica Jackson Hutchins’s lame social-comment couch (covered in newspaper articles about Obama, perched upon by two crude ceramic vessel personages), and shares wall space with some purposely (I assume) dingy paintings by Jim Lutes.

Notwithstanding my preponderantly negative comments, I think “less is more” is a path that the Biennial should continue to take. My disagreements with this one concern its specific curatorial choices, not its slimmed-down orderliness. The 117 artists chosen four years ago were too many from which to fashion an even faintly coherent exhibition, but far too few to be “representative” of all the varied currents of contemporary American art. And the roughly 90 picked last time suffered from the same bracket inadequacies. How about, in 2012, choosing a dozen or so, and bravely calling them the “best of the new”? Four to a floor with room enough for each artist to make a real statement, reveal a real course of development, and even get serious about applying “research” to their art. But I somehow suspect that the museum won’t listen to me. After all, I’m the guy who didn’t miss Caligula ‘til the Whitney ran dry.

Currently On View “The Whitney Biennial” at the Whitney Museum of American Art, New York, through May 30.