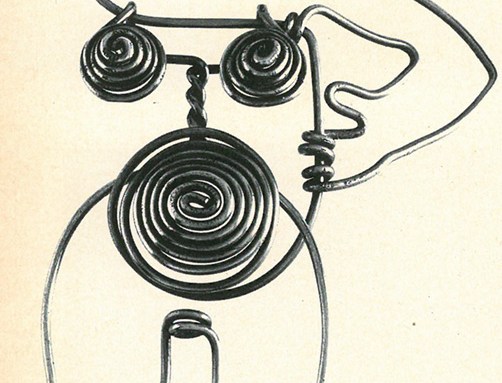 To complement Emily Spivack’s history of the sequin in our current issue, as well as other technological innovations in fashion, we went through our archives and found this portfolio of artist-made jewelry from November/December 1967. Renée S. Neu, then the assistant curator of painting and sculpture at the Museum of Modern Art in New York, organized the exhibition “Jewelry by Contemporary Painters and Sculptors.” Here, Neu introduces a portfolio of seventeen pieces selected from the work of the seventy international artists that were represented in the show. —Eds.

The word “jewelry” evokes visions of glittering diamonds, brightly colored gems, and precious metals worked into settings that create an impression of wealth and elegance, and conform, for the most part, to contemporary trends of fashion. A few artists, such as Julio Gonzalez, have at one time or another made jewelry in order to earn their living. In Italy, the Pomodoros began as professional jewelers, and Mirko and Afro, in their commissioned jewelry, followed the Italian tradition of combining elegance with personal expression. But even when creating jewelry to be sold, an artist retains a personal, nonconformist attitude. The intrinsic value of the materials is of less interest to him than the opportunity to express himself in a different medium and scale—an opportunity for a new approach.

A surprising number of contemporary painters and sculptors have made jewelry as a means of personal expression rather than primarily for the market. Their modes have ranged from witty and playful to simple and severe, or to outright fierce and barbaric. Lassaw, whose jewelry closely resembles his sculpture, has said: “For me the desire to make jewelry arises from leisurely, even playful, experimentation with forms and the flow of molten metals; sometimes it is probably a subconscious preparation for larger works.” Dan Ben-Shmuel, whose sculpture, on the other hand, is far more severe than his jewelry, also speaks of the “wish to play” mentioned by Lassaw, but he adds: “Jewelry is a way of fully expressing the accidental and freeing oneself of decorative elements one does not wish to use in sculpture.”

One of the most ancient functions of jewelry has been not only to adorn, but also to serve as a talisman. Marcel Duchamp seems never to have made jewelry, but in a letter of 1921 to Tristan Tzara he proposed that the letters D A D A be cast separately in metal, strung on a chain, and sold to raise money for the dada movement. “The insignia would protect against certain diseases, against numerous annoyances of life,” he wrote, “something like those Little Pink Pills which cure everything … a universal panacea, a fetish in this sense.”

Something of this magical power seems to invest the pieces artists have made for their families or close friends—like the small medallions by David Smith—in which the emotional charge is so strong that the objects have become powerful charms.

A deliberate symbolic reference is found in the work of John Fischer, to whom bread is the symbol of life. His large sculpture is made out of dough, chemically treated to resist decay; his pieces of jewelry, while also made of wheat products, reflect a dadaist attitude and bring to mind Duchamp’s ready-mades. Paul von Ringelheim, a relative newcomer to jewelry-making, pursues in his brooches his interest in signs—specifically, the arrow. Through another kind of sorcery, Habbah in his small sculpture and jewelry transforms common objects such as tableware into personages endowed with woeful expressions.

The human figure or portions of its anatomy recur frequently: in Dubuffet’s ring, an example in another medium of his art brut style; in Marisol’s ring, quite different in its delicacy of carving from her recent large sculpture, yet once again a self-portrait; in Lichtenstein’s teardrop pendant inscribing the profile of a woman in tears; in the tiny marionettes that William Copley made as earrings for his daughter; and in the brass wire belt buckle by Alexander Calder, closely related to his drawings and early wire sculpture.[pq]Jewelry by artists exerts a special fascination and has attracted a number of collectors.[/pq]Calder’s work in jewelry can range from the playful to the monumental.

Nevelson’s compositions are as powerful and mysterious as her major sculptures. Man Ray, Ark, Fontana and Rickey all make their statements with bold and simple forms that in the ease of the last three are closely related to their other work. Fontana, however, dismisses his beautiful, shiny gold bracelet as “something nice and fun to wear at the beach.”

At the opposite pole from Fontana’s and Richard Lippold’s use of the traditional material, gold, is Clinton Hill’s selection of radio resistors to fashion necklaces and earrings which give an impression of light, elaborate richness. In Hill’s case, his jewelry differs completely from the style of his restrained paintings.

Jewelry by artists, so diverse in materials, techniques and approaches, exerts a special fascination and has attracted a number of collectors. The owners generally develop a strong attachment for these pieces and wear them proudly, like badges of conviction. But if diversity seems the most distinguishing feature of this jewelry, there is one quality which unifies it: whether serious or playful, spontaneous or carefully planned and wrought, these objects all manifest a great intellectual and esthetic integrity. The alchemy of the artist’s imagination and execution transmutes the basest materials into objects of precious value.