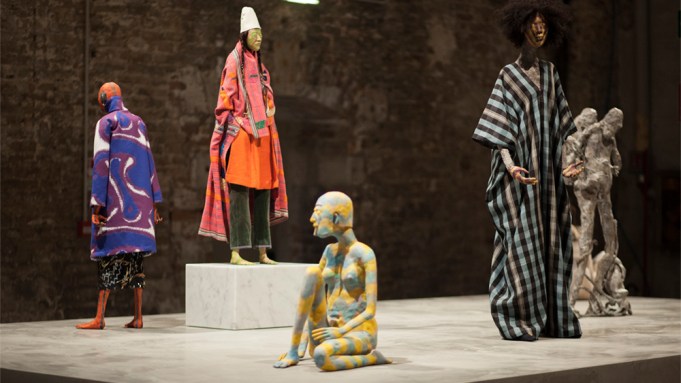 Christine Macel’s primary intention for the fifty-seventh edition of the Venice Biennale, which she has titled “Viva Arte Viva,” becomes apparent as soon as you enter the Central Pavilion in the Giardini. Eight photographs by Croatian Mladen StilinoviÄ? are collectively titled Artist at Work (1978/2017) but you don’t see the artist toiling away in his studio in these self-portraits. In one photo he lies on his bed with open eyes while thinking or daydreaming, and in the others he is tucked under the covers, blissfully asleep. StilinoviÄ? (1947-2016) often used impish humor to skewer political power and artistic conventions; he was among the most significant artists in the former Yugoslavia and a courageous pioneer of diverse, conceptually inclined art practices in Eastern Europe. Self-portraits of the relaxing or sleeping artist “at work” not only are a riot, but also shift focus from art to the artist, to his life, consciousness, and daily routine of both labor and rest. In this exhibition, Macel strives to focus on artists and not just on what they produce. An innovative and engaging online component of “Viva Arte Viva” features video portraits of the participating artists discussing their lives and working processes.

Spanning the Central Pavilion and the Arsenale, the exhibition is divided into nine “pavilions,” which Macel likens to chapters in a book. The Pavilion of Artists and Books opens the show with the StilinoviÄ? work, and it ends with the Pavilion of Time and Infinity. The last two editions of the Biennale shoehorned a vast amount of art into whopping curatorial themes (“The Encyclopedic Palace” in 2013 and the grandiose “All the World’s Futures” in 2015). In stark contrast, “Viva Arte Viva” feels more conceptually streamlined, with ample space for each individual artist.

Near the entrance to the Arsenale, in the Pavilion of the Common, Lee Mingwei of Taiwan and his volunteers are at work with needle and thread at one end of a long table. They converse with visitors while mending damaged clothes that people have brought to them. Threads still attached to the articles of clothing, which are neatly piled at the far end of the table, swoop up the wall to a gorgeous and sensual installation of multicolored spools. The Mending Project (2009-17) is at once intimate and public, sociable and quietly poetic.  Nearby is a generous selection of map-like embroidery by Sardinian Maria Lai (1919-2013), including Geografia (1992), and bedazzling sewn books. Textiles and sewing are an unusual sub-theme running through much of the exhibition, from the colorful, cotton and wood assemblages by German Franz Erhard Walther (winner of the Golden Lion for Best Artist of the Exhibition) to the opulent clothes on the small, strange figurative sculptures of New Zealander Francis Upritchard, and American Sheila Hicks’s installation of vibrantly colored fabric mounds. The latter work, titled Escalade Beyond Chromatic Lands (2016-17), in the Pavilion of Colors, just doesn’t seem all that impressive in the cavernous space. More riveting is the understated seven-channel video installation Balloons on the Sea (2011) by Turkey’s Hale Tenger, with lovely music by Serdar AteÅ?er. A wall projection shows twenty-three colored balloons floating on the surface of the sea, yet because Tenger inverted the image the reflections in the water seem to hover above the balloons themselves.  Individual balloons appear on six suspended screens, where they periodically pop, only to miraculously reappear. The work is based on a Turkish game where men tie balloons on a string, float them on the water, and shoot them with rifles. In Tenger’s hands, this game becomes an allusion to violent upheaval in Turkey and elsewhere, in the context of a whimsical and enchanting work. More works with this kind of visual verve and poetry would be welcome in the exhibition, which often feels rather bland.

Still, there are standouts in each section, some from accomplished artists who merit wider international attention.  In the Pavilion of Time and Infinity, US-based Argentine Liliana Porter presents the captivating, yet also harrowing miniature El hombre con el hacha y otras situaciones breves, Venecia 2017, a diorama atop a white platform. At one end a tiny toy figure swings an axe over his head. In front of him, as if ruined by his blows, lie broken and strewn objects—overturned furniture, scattered books, fractured figurines, and more—all scattered with ceramic shards. It brings to mind entropy, villages ravaged by war, toppled monuments, and archaeological traces of the vastness of human history, but this all plays out in dollhouse dimensions.

In the Pavilion of the Earth, American Michelle Stuart exhibits three of her mesmerizing gridded photographic works. Flight of Time (2016) creates a complex mesh of forms and subdued colors from archival inkjet prints of a cresting whale, birds, flowers, landscapes, the sky, and more. Nearby are excellent drawings in ink and colored pencil by Inuit Kananginak Pootoogook (1951-2010). These works concern indigenous culture and traditions beset by modernity. Untitled (RCMP and Inuit Family), 2007, depicts an uneasy encounter between a Canadian law officer in a bright red uniform and an Inuit family. The scene is fraught with misunderstanding and strife. In the Dionysian Pavilion, where the theme is the female body and sexuality, Lebanese Huguette Caland’s line drawings of women’s limbs and erogenous zones are simply wonderful; in 1970s Lebanon these were groundbreaking feminist works. Acrylic paintings by Cuban Zilia Sánchez don’t seem Dionysian in the sense of wild excess and freedom, but are breathtaking in their own subtle way. Five nipple forms protrude from five light gray monochromatic panels in Las Troyanas (The Trojans), 1987-97, a frankly feminine take on Minimalist painting. In the Pavilion of Traditions, Korean Yee Sookyung’s towering, tour de force sculpture Translated Vase_Nine Dragons in Wonderland (2017) is made from fragments of vases deemed defective in pottery factories around Seoul.

In the Pavilion of Artists and Books, the calm of StilinoviÄ?’s self-portraits is followed by a hotbed of activity: Olafur Eliasson’s Green light – An artistic workshop (2017). Eliasson’s studio practice famously involves collaborating with experts in diverse fields, and he brings the same communal energy to Venice. For this project, refugees from numerous countries—including Syria, Iraq, Somalia, Afghanistan, and Nigeria—have signed up to construct polyhedral lamps designed by Eliasson, which are sold to benefit two NGOs. The participants are at work in the Biennale, available to speak to visitors. Part of the project involves providing them with free access to practical and educational programs designed to help them adjust to resettlement. Rather than merely commenting on a pressing issue, Eliasson wields his considerable stature as an artist to affect change in the present. A thorough conflation of art and life, this work is a signature project of Macel’s artist-oriented Biennale.

Kristen Stewart on Returning to Cannes, Taking Fashion Risks and Not Being Tamed

10 Best Antibacterial Body Washes to Get Really Your Skin Clean