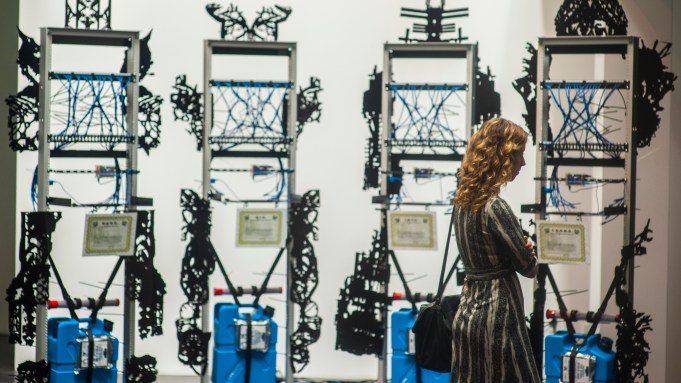 The Continental Divide, a mountainous boundary that separates the watershed, east and west, throughout the Western Hemisphere, traverses Colorado along the Rocky Mountains. In the state’s capital, Denver, the third iteration of the Biennial of the Americas (through Aug. 30) is currently examining the divisions, topographic and otherwise, between countries—and between the Northern and Southern hemispheres—over 20 years after the signing of the North American Free Trade Agreement.

Conceived in 2010 by John Hickenlooper, then mayor of Denver and now governor of Colorado, to be an “international festival of ideas, art and culture,” the Biennial of the Americas positions itself as an ideas incubator. This year, in various venues across the city, discussions addressed topics ranging from Millennial leadership to the future of the legal marijuana industry to the “return of the city-state.” Unabashed political and commercial prospecting entered into recent talks by former Chilean president Ricardo Lagos, Nature Conservancy CEO Mark Tercek, and Nora Volkow, director of the National Institute on Drug Abuse. The symposia spoke to the ambitions of local leadership to situate Denver and Colorado at the center of global conversations on civic, capital and cultural interests, equally evidenced by the city’s still-sparkling arts district, much of which has been developed in the past 20 years.

The central exhibition “Now? Now!,” at the Museum of Contemporary Art Denver, synthesizes the serious motivations of the biennial’s themes in the works of 47 artists from North and South America. Partly inspired by the late Mexican poet Octavio Paz’s statement, “…the twilight of the future heralds the advent of the now,” Lauren A. Wright, the biennial’s artistic director and curator, selected earnest, politically and socially minded works that tackle such issues as immigration, environmental degradation and the consequences of technological progress.

In the three-channel video Essays on Reconstruction (José Martí), 2014, the Mexico City-based artist Joaquín Segura contemplates the constructed nature of the past. Produced for the 2014 Nicaragua Biennial, the work documents a shantytown founded on the outskirts of Granada in 2008. Many of the town’s 7,000 inhabitants identify with the Sandinista National Liberation Front and (falsely) consider themselves guerillas. Upon the discovery of a blank concrete monument, community members interpreted the marker as the death spot of Cuban poet José Martí, whom they mistakenly venerate as a fallen Nicaraguan revolutionary. Intrigued by the collective fiction created by these stateless people, Segura worked with the community to restore the monument to its full, albeit misguided, glory.

During a walkthrough of the show, Mexico City-born Brooklyn-based painter Aliza Nisenbaum told A.i.A., “The place of the immigrant is a space of tension between the past and the present.” The tension between tradition and the new is epitomized in her painting Gloria, Angelica, Jessica, 2014, in which three female immigrants sit in a colorful domestic interior: a grandmother on one side in traditional Mexican garb, her Air Jordan-clad granddaughter who barely speaks Spanish on the other, and her daughter in the middle.

Nisenbaum met her subjects while collaborating with Cuban artist Tania Bruguera on “Immigrant Movement International” (IMI), a project space in Corona, Queens, supported by the Queens Museum. “[These women] work in the public sector but hide from visibility,” she explained. The artist is well aware of painting’s history as a tool of political visibility. In order to counteract what she perceives as a generalized, impersonal representation of undocumented immigrants outlined by liberal politicians supporting immigrant rights, the artist painted her subjects from life, in the IMI studio and their own homes. “We often think of the private sphere as an autonomous space, safe from institutional categories like ‘undocumented immigrant,’” she said. Through her paintings, Nisenbaum attempts to re-humanize people who are denied official state recognition.

Sterling Crispin’s four totem-like sculptures N.A.N.O., B.I.O., I.N.F.O., C.O.G.N.O. (all 2015) express anxiety for the future based on events in the present. In the California-based artist’s “now,” the Los Angeles water shortage is starkly contrasted with Silicon Valley’s endless optimism. Taking into account Moore’s Law, a prediction for an exponential rate of accelerated change in computing capability, Crispin sees a future where humans are obsolete due to environmental catastrophe and robotic ingenuity. Each work—part survival kit, part investment strategy—comes equipped with emergency food rations, a Lifesaver jerry can (a water filter that enables a family of four to survive for two years) and 100 shares of publicly traded technology stock. Small computer monitors track the stock prices and geolocations of each piece. For the forward-looking collector, owning one of these sculptures fulfills the desire to make good on your investment as well as a doomsday contingency plan. Who says that art can’t be useful?

The 2024 Range Rover Velar in Photos

Navarrete vs. Wilson Livestream: How to Watch the Championship Boxing Fight Online