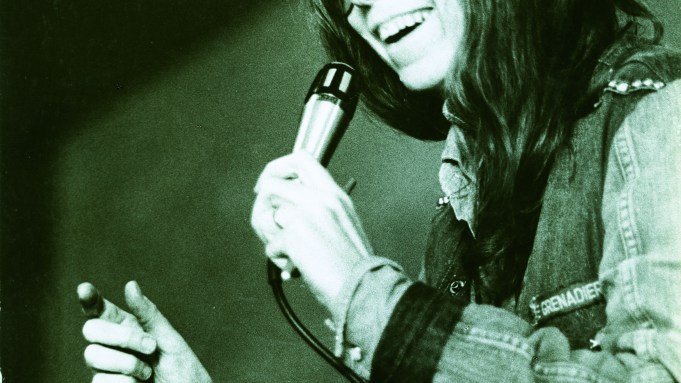 When Jill Johnston began writing for Art in America in the mid-1980s, it marked her return to criticism after a hiatus that had lasted nearly two decades. Born in London in 1929, Johnston moved to New York in the mid-1950s, studying dance with Jose Limón until a broken foot rechanneled her passion for dance into writing. She first made a name for herself as the dance critic for the Village Voice in 1959, just as the New York art world Pop-ped. Genres were collapsing, Happenings were happening and Johnston captured all with the clear-eyed aim of a sharp-shooter in a weekly column titled simply “Dance Journal.” By 1961 she was enmeshed in the community of “postmodern” choreographers that erupted in and around the Judson Memorial Church. She fervently championed this new guard, which included the likes of Yvonne Rainer, Robert Morris, Alex Hay and Lucinda Childs. She idolized John Cage and was one of the first critics to praise the work of Merce Cunningham. Written inside these spinning circles, Johnston’s texts began to perform their own leaps, twirls and pratfalls. “Fluxus Fuxus” (1964) is her witty spit-take on artists George Maciunas, Nam June Paik and others for whom the value of art, she argued, “resides in the performance.” In the essay, Johnston called forth the spirit of their work with a performance of her own:

Fluxus composers are not pro-art or anti-art. How could they be for or against anything when the thing to do on the program is to eat the hot dogs distributed by the conductor who caught them as they flew down to the stage on a rope from the balcony? . . . Next time I might stay home, or contemplate a hot dog at Coney Island. Meanwhile, I salute you and fux Fluxus from the forty-two keys of my typewriter.1

In 1965, Johnston quite suddenly unbecame a critic. Rather than the usual performance roundup, her “Dance Journal” column on Sept. 16, titled “Critics’ Critics,” took aim at those who accused criticism of being parasitic, and argued that it was, in fact, a largely untapped art form.  With ferocity and grace, she laid out the new path her writing would follow:

She would later reflect that her frustrations with criticism as it stood were prompted by other factors too: that artists only ever responded to her opinions, but never engaged with the craft of her prose; that the weight of her critical voice wasn’t grounded by an equally strong personal mettle. “My position was authoritative,” she later wrote in the second volume of her autobiography,  “but I had no inner authority.”3 Ever the open book, Johnston also revealed that “Critics’ Critics” was written while she was at Bellevue Hospital, where she was being treated for “chronic undifferentiated schizophrenia.”4 Losing her mind, Johnston steeled her ego. She held on to her column in the Village Voice and began to use the space to write her own creation story—recording the world around her as it happened to her, or as she happened to it—becoming the “I” of her own storm.

In her 1967 essay “Slouching Towards Bethlehem,” Joan Didion famously observed from California that America’s center was not holding. On the other side of the country, Johnston embodied this untethering, and placed herself at its center. Johnston threw herself into events as though to become the person she wished to write about, moving away from writing strictly about culture to writing her life: “I was the performance; the writing was an extension of it, a running account and  commentary.”5 Her breathless prose picked up velocity. Her narratives included ambling thoughts and observations on the parties she attended, the trips she took and the people she met. Some essays struck with the unpredictable precision of a lightning bolt; others were more like smokescreens. While many Voice readers relished Johnston’s columns, not everyone was a fan of her new approach: “A lady at Jasper Johns’s house last night where a black-tie thing was going on as a benefit for Merce Cunningham . . . told me ‘they’ didn’t understand my writing anymore. I used to be so good.”6

To sharpen her point, Johnston memorialized the end of her life as a critic, organizing a panel discussion in May 1969 titled “The Disintegration of a Critic: An Analysis of Jill Johnston.” Among others, Andy Warhol, superstar Ultra Violet, performance artist Carolee Schneemann, and critics Gregory Battcock and David Bourdon paid tribute to Johnston before an audience of 300 people in a celebration of the eroding boundaries between artist and critic, presentation and performance. Johnston arrived 40 minutes late, having decided that her absence was key to the conversation at hand, and proceeded to read her Village Voice column for the following week. A journalist covering the event for Variety described Johnston’s action: “She confirmed the suspicion that she is as confusing in person as she is in print.”7

That same year, Johnston came out in print as a lesbian, making her one of the first openly gay journalists in America. (Four years later, she would repeat her coming out on the “Dick Cavett Show,” grinning from ear to ear and mugging a “Hi Mom!” for the camera.) Her politics radicalized as she lived openly; lesbianism was, she believed, not only the key to her autonomy, but the key to every woman’s liberation. “Until all women are lesbians, there will be no true political revolution,” she declared to a roiling audience at Town Hall, the New York performance space, in 1971. The occasion for her speech was “a dialogue on women’s liberation,” in which Johnston presented alongside renowned figures such as feminist writer Germaine Greer, the National Organization for Women’s Jacqueline Ceballos and literary critic Diana Trilling. The panel was, perversely, moderated by Norman Mailer, who had, ironically enough, been Johnston’s ego ideal during her stay at Bellevue: “I was indebted, I believe, to Norman Mailer, whose brief imprisonment at Bellevue in 1960 for stabbing his wife had made a strong impression on me.  .  .  . The message Mailer got across was that his artistry and imagination put him above the law.”8 During her speech, which Mailer cut short, she spoke in prose unpunctuated and possessed of a powerful locomotion to proclaim, “This is the body that Jill built.”

In 1973, Johnston published “Slouching Toward Consciousness,” a chapter in her seminal collection, Lesbian Nation: The Feminist Solution. Here she tracked her experience embracing the cultural and sexual revolutions: from being called a man-hater by painter Larry Poons to attending her first meetings, albeit with a certain degree of detachment, of the Gay Liberation Front. Citing Didion in the title of her essay was not a simple joke; it was Johnston’s closed parenthesis—the unwritten other half—of the story of a spun-out generation.

By this time, Johnston had mastered a prose style that was Steinian in its deceptively plain speak, its use of repetition and run-ons, and its swerving puns. Gullibles Travels: Writing (1974) featured chapters with titles such as “Great Expectorations,” “As Anybody Lay Dying” and “Tender Gluttons.” Punning punctured canonization, as Johnston playfully hooked her texts to the “great works” of Swift, Dickens, Faulkner, Stein and others. More simply, it betrayed her goofy sense of humor, one that ran throughout her work, perhaps as a Wildean strategy to upend seriousness, to unmask the powers-that-be with a giggle and a wink. Although Johnston had not yet returned to art writing per se, a deeply compelling and original portrait of an artist appears in Gullibles Travels: “Agnes Martin: Surrender & Solitude” (1973), which stands as a work of literary art. In it, Johnston describes visiting Martin in New Mexico, bearing witness to the artist’s self-imposed isolation as well as the ways in which Martin’s unconventional life choices freed her to think and to paint:

she says what she knows for what she knows is what she is and what that is is perfect for her and she is still on the path herself. she says one thing she has a good grip on is remorse. and that suffering is necessary for freedom from suffering. and that the wriggle of a worm is as important as the assassination of a president. and that our work is very important but that we are not important.9

When Johnston started writing for A.i.A., she had recently completed her Autobiography in Search of a Father. Its two parts, Mother Bound (1983) and Paper Daughter (1985), are lucid, candid and engrossing for the immediacy with which she writes about her many lives. Although her style had since shifted to transmit her thinking on a more traditional frequency, she remained fiercely dedicated to the idea that the personal—that life in all of its embarrassment and complexity—was inextricable from the writing of criticism. The nearly 30 essays and reviews she wrote for A.i.A. about dancers, choreographers and artists such as Robert Wilson, George Brecht, John Cage, Tehching Hsieh, Karole Armitage, David Salle and Robert Rauschenberg are all refined productions of Johnston’s compassionate, observant, humorous and (occasionally) prying eye. When, in 1987, A.i.A.’s then editor-in-chief Elizabeth C. Baker asked Johnston to write on Jasper Johns, the article evolved into a book-length meditation on his work. Jasper Johns: Privileged Information (1996) posited that Johns was, in Johnston’s words, a “secret autobiographer,” and that his life could be understood through his work, and vice versa. It seems that Johnston, after all those years, had not lost her ability to rile and infuriate. Johns did not approve of the book and refused to give her permission to reproduce his work. Johnston, ever true to herself, allowed her writing alone to paint the images for the reader-simply more proof of her artful critical powers.