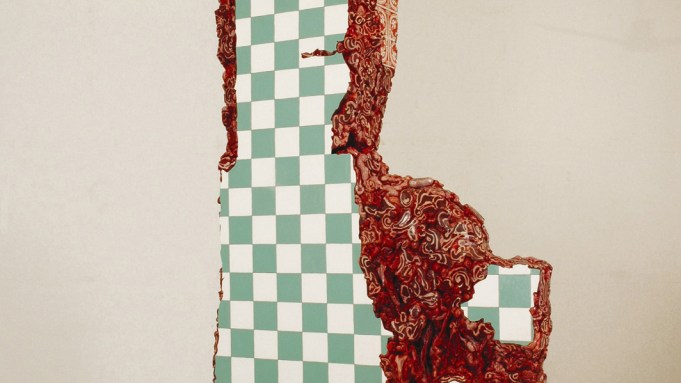 Carrying on a tradition of gender parity, two women artists—Adriana VarejaÌ?o and Jac Leirner—stand at the forefront of Brazilian art today.

A LOT CAN HAPPEN in 20 years. That is how long ago I made my first trip to Brazil to take a look at an art world of which until then I’d had only the faintest glimpses in magazines, gallery shows and museum collections. Because two decades ago the “global” art world—how I detest that military-industrial adjective—did not fully exist, and the “cosmopolitan” art world I belonged to was still a patchwork with gaping holes. We did not yet have BRIC, the acronym art marketers and geopolitical theorists now use to designate the economically rising Brazil, Russia, India and China, and in any given season there was precious little art from any of these countries on view in the art capitals of New York, Paris, Cologne and London. But I was lucky, and a grant was offered to me to tour four Latin American nations—Argentina, Brazil, Chile and Uruguay—in the company of an informed guide, art patron Jorge Helft. I had worked in Mexico in the 1970s for David Alfaro Siqueiros, and thanks to the Cisneros Foundation I got to Venezuela in the early 2000s. By then, however, Hugo Chávez’s policies of nationalist cultural populism were making it difficult for serious art people and institutions to highlight the country’s best works—notably the semipermanent installations of the wholly remarkable, wholly cosmopolitan Gego (née Gertrude Goldschmidt), whom I missed meeting, as she had died in 1994.

One of the most striking discoveries for me—a veteran of 1970s-’80s feminist circles—was how prominent women are in the history of Latin American modernism, and how publically their contributions have been acknowledged. Arguably, Brazilian modernism kicked off with the controversy surrounding Anita Malfatti’s formally experimental one-woman exhibition in São Paulo in 1917–18. Tarsila de Amoral, following her return to São Paulo from study in Paris, brought her social activism and her biomorphic semiabstraction back to a city energized by the 1922 “Week of Modern Art,” organized by Malfatti and others. The event—which included lectures, readings and concerts as well as an exhibition—provided the Brazilian vanguard with the kind of momentum that the Armory Show gave forward-looking North American artists in 1913.

Jump to the 1960s and 1970s, and one finds Marta Minujin stirring up the scene in Buenos Aires with her performances and interactive installations, Gego exploring sculpture’s formal boundaries with greater artistic reserve although no less drive in Caracas, and Lygia Clark and Mira Schendel opening new conceptual and perceptual horizons in Rio de Janeiro and São Paulo, respectively.

Traditionally, the Brazilian art scene is divided between those two cities—that is to say, between artists who identify themselves as Carioca (from Rio) or as Paulista (from São Paulo), the way many artists in the U.S. divide between New Yorkers and Angelenos (although as a former Chicagoan, I am keenly sensitive to the fact that there is also important activity between the coasts). In Brazil, the “flyover” would include Curitiba, Porto Alegre (home of the Mercosul Biennial) and Salvador, among other art-rich cities, not to mention the wilderness art garden of Inhotim created by iron mogul Bernardo Paz, former husband of painter and relief maker Adriana Varejão.

VAREJÃO (B. 1964, RIO) is one of the two women artists who most impressed me during my visit to Brazil in 1992. That was the year she painted Map of Lopo Homem, which was included in a small cartography-inspired survey called “Mapping” that I organized two years later for the Museum of Modern Art in New York. Emblematic of her work of that time, the painting depicts an exploration-era chart of the “known world” on a surface so heavily built up with oil pigments that it bellies out like a cross section of a three-dimensional globe—one that has been brutally slashed from top to bottom, spilling blood-red paint out of the exposed insides of the viscous mound. Subsequent pictures of maps, decorative tiles and bodies—some featuring gory flesh beneath hard carapaces—all allude to the bloody European conquest of the New World.

Other historical references informed Varejão’s installations of the later 1990s: mimicked trade porcelains that linked Asia to the Americas, reconfigured paintings of religious martyrdoms and conceptually reprised “casta paintings”—a uniquely Latin American genre of the 17th, 18th and 19th centuries devoted to representing various kinds of racial mixture.[pq]Varejão’s depictions of bath and sauna interiors, along with her sculptural elements with “gory” fractured edges, keep the human body very much in the mind’s eye.[/pq]Contemporary references or parallels in Varejão’s work include artists as diverse as Lucio Fontana, the Minimalist grid masters, and image scavenger extraordinaire David Salle. What distinguishes her art from all these sources is its visceral grotesquery and intensely tactile painterliness. There was nothing like her pieces when she made them, and there’s been nothing like them since.

Varejão dedicated much of the first decade of the 21st century to large quasi-abstract depictions of bath and sauna interiors. They, too, evoke Minimalism, but the occasional skin-tone palette, the palpable substance of the paint and the anomalous incidents detailed in them (such as blood flowing toward a drain) keep the body very much in the mind’s eye of the viewer, even though no bodies are ever portrayed. In 2004, a show at Lehmann Maupin in New York—consisting of paintings of tiled walls, hung around a large room at the center of which were dispersed boxy freestanding tiled panels whose fracture edges reveal a core of artificial entrails—rendered the fusion of architecture and flesh with a physicality worthy of horror master David Cronenberg but without his Grand Guignol intent. A similar arrangement occupies the interior of Varejão’s personal pavilion at Inhotim, a project that has taken up much of her energy in recent years and has placed her among luminaries such as fellow Brazilian Cildo Meireles and the U.S.’s Chris Burden, who have permanent sites in this 240-acre indoor/outdoor showcase of contemporary art. Given its international frame of reference, thematic scope and physical scale, Varejão’s work has never been modest. At midcareer, the artist is poised—as few predecessors have been—to claim the kind of international recognition her male counterparts have received. And the times seem ripe.

THE OTHER OUTSTANDING ARTIST I met in Brazil in 1992, Jac Leirner (b. 1961, São Paulo), is in much the same position, though her work could hardly be more different. Indeed, a good deal of it capitalizes on the subtle deployment of decidedly modest materials. Early on Leirner’s specialty was the accumulation and eccentric disposition of found or purloined objects. Lung (1987), a piece I acquired for MoMA, consists of over 3,000 collapsed Marlboro cigarette packs strung together on long latex tubes—an echo of Eva Hesse perhaps but, if so, a very discreet one. Other works realized in the same period from the same resources—Leirner was a chain-smoker then—make ingenious use of Marlboro cellophane wrappers, foil tear-strings and tax stamps.

Surplus consumer-society items—inflationary currencies, duty-free sacks and museum-store shopping bags, museum mail and stationery, art-world business cards (visitors to the exhibitions in which these were shown could avidly fill their address books in a single session and cold-call connections to their heart’s content if they had the nerve), obsolete airplane ashtrays, airline headphones and cutlery gathered during years of frequent flying to biennials and the like—constituted the raw materials of other early Leirner-assisted readymades. Even though these elements were for the most part small and disposable, the aggregates she fashioned from them were generally space hungry. Her horizontal stacks of money, for example, twisted through white cube galleries like attenuated Carl Andre sculptures with a serpentine backbone. The aspect they acquire was astonishingly refined, at times even precious, though not so much as to diminish the pleasure they offered.

The second half of the last decade has been an up-and-down period for Leirner but, despite gallery changes and some relatively quiet years, far from an inactive one. Last season, the artist made a two-part comeback—first in the winter, with a hometown retrospective at the Pinacoteca de Estado de São Paulo, which won the prize for best exhibition of the year from local critics; second, beginning in May, with a solo show of new work that is still on view at the new gallery of the Yale School of Art in New Haven, Conn.[pq]Surplus consumer-society items—from inflationary currency to discarded shopping bags—constitute the raw material of Leirner-assisted readymades.[/pq]Since I was the curator of the Yale show, I cannot legitimately evaluate it, but I risk no conflict-of-interest violation to report that, in a burst of focused improvisation, Leirner made 22 brand-new pieces in the space of seven weeks. Moreover, while the gathering of commonplace things and the compositional procedures employed in combining them are in keeping with her past practice, the “things” themselves are quite different from any she has presented before—and the resulting freshness is there to see. Two previously unprecedented components are a suite of delicate abstract watercolors of a kind Leirner has been quietly making for over a year, and a cluster of quasi-constructivist polychrome wooden floor sculptures in part inspired by the watercolors.

Taken together, the recent works of Varejão and Leirner may not signal a bold new tendency the way that Clark and Schendel’s conceptual experiments did, but they certainly evince the continued leadership of women in Brazilian art, a fact augmented by the work of artists such as painter Beatriz Milhazes, with her vibrant abstractions, and Leda Catunda, a sculptor, painter and graphic artist. I often tell graduating students that, if they have doubts about going to New York or Los Angeles, they should think about places outside the United States—places like London and Berlin, but also like Rio de Janeiro and São Paulo. Varejão, the Carioca, and Leirner, the Paulista, are among the reasons why.

WWE Money in the Bank Live Stream: How to Watch the Ladder Matches Online