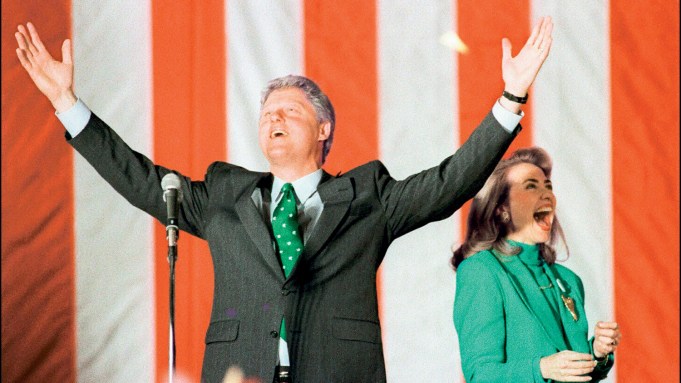 I GREW UP IN THE D.C. suburbs, in Maryland. My mother worked for the government, and my dad’s business often dealt with government. As a family, we watched all the speeches and debates, and every meal was framed with a dis- cussion about politics. Our conversations were always most energetic during elections. The Clintons were my favorite subject and they still are.

D.C. changes with every administration. When George W. Bush was there, it was cowboy boots and cowboy hats. With the Clintons, it was women in business suits (mostly pants suits). At the same time, everyone was watching Bill eating McDonalds. This represented a big change. Basically, Bill came from nothing. He had a single mother, and his half-brother was a drug user who went to jail. Still, he wound up as President of the United States—but a man who, as a candidate, was willing to go on TV and play the saxophone.

Much of what I do in my work is about trying to achieve the unachievable, and about surpassing expectations. Bill Clinton was a symbol of that. Why was he adopted by the African-American community as “the first black presi- dent?” Was it because he came from not a lot, but became somebody? Was it his style? Jesse Jackson and Bill Clinton spoke the same way. The only speakers I’ve ever heard who made me sob like a baby and BELIEVE!! They were both able to inspire: for them, politics was church.

I can’t really pinpoint the reasons for my obsession with the Clintons. Maybe it was the contrast to the Bushes and Kennedys—to the people who were just supposed to rule us. Clinton was something new. Obama doesn’t have that same energy. He doesn’t have Bill’s passion—that crazy fire.

And then there was Hillary. I love how she baked the cookies and wore the headbands, and pretended to be the Southern wife. Meanwhile, she was plotting her total takeover. You could tell she was in such a conflicted role as First Lady; anyone in their right mind knew she was a powerhouse. It was just so funny to see her try to take on all these different personas that she really wasn’t. And then her plan for healthcare failed, and it was awful. Michelle is a powerhouse too, but you can tell she is much more comfortable with her role. I don’t think Hillary ever wanted only to take care of Chelsea and bake cookies and promote fitness. She wanted to rule the world. And I believe the Clintons had this understanding between them that they would rule the world. It’s funny, Tipper and Al broke up but the Clintons seem to have a pact; they are still, and probably always will be, together.

Hillary went to Wellesley College, and every woman in my family (on both sides) went to Wellesley, except my sister and me. There is a type of strong Wellesley woman, who grew up with certain ideals of what she was supposed to be and then countered them entirely. My mother is like that. She was supposed to get married and have babies, and her husband was supposed to be super successful and take care of her. But my mom had a big job. She wasn’t a homemaker at all. (She does claim to have baked bread at some point.) I’m interested in that generation of women who fall between two eras, two places.

Hillary is also a little evil, in a good way. She has insane capabilities and incredible confidence. She is unwavering. And that is what people have problems with. We have to force her to cry, or have her pretend to be “soft and feminine,” which is offensive on so many levels. There was a “scandal” every day! It was like, she’s a lesbian, she caused the Vince Foster suicide, she took money from this person or that—or it’s all just a ruse, she’s really running the government! But however we criticize her, or what she wears or how she looks, she’s just gotten better and better. And now she is unapologetic.

While working on my MFA at the School of Visual Arts I dressed up as Hillary, in business suits. I was interested in a woman who falls apart in a certain way but is insistent about not falling apart. Or who seemingly has it all together but with an undercurrent of turmoil. Hillary, or Martha Stewart. Women in power. And archetypal women, like homecoming queens or Jersey girls, who have a very distinctive character in what they wear, how they act. Martha is too Waspy for me. But Hillary has a character that has transformed through the years. Now she’s free to be badass, which she always was, anyway.

There was some sort of mirroring going on in me with Hillary. Something about ambition and desire and passion. Something about misbehaving, an unwillingness to participate in the way one is supposed to participate or function in the way one is supposed to function. Or about being in a space that is supposed to work a certain way and refusing to let it work that way, and manipulating or transforming it through aggression or destructiveness. The end product winds up being better.

People were very let down by Bill. But that was ridiculous. My dad couldn’t stand him after the Monica Lewinsky thing, but my mother, my sister and I still loved Bill. We just didn’t care.

I remember every single speech. He can destroy a room. It’s the charisma, the performance. How do you control an audience? How do you control a space? Just watch that 10-second clip of him emerging to speak at the 2012 Democratic National Convention: “I’m home. I’m so happy to be here. You are going to have to drag me off this stage!” Not only is he a genius, but he loves the performance of politics. And he’s incredibly brilliant at it. Of all the presidents, who would you want to hang out with?

And his voice—a voice that is about to die but doesn’t. The Clintons: against all odds.

—As told to Faye Hirsch.