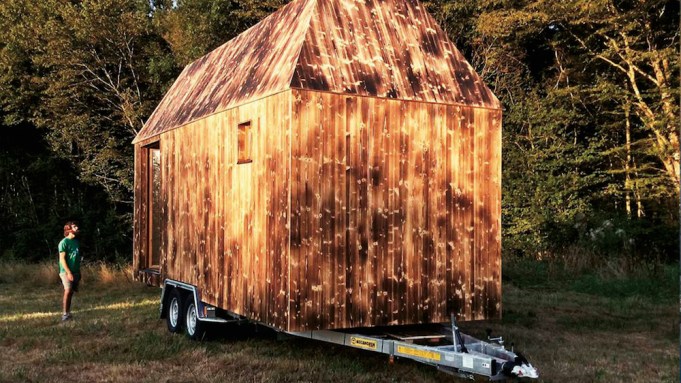 In the backyard garden of a family in Montreuil, a liberal suburb east of Paris, two asylum seekers from Sudan are living in a temporary relief shelter, a micro-house designed by the architecture collective Quatorze. Custom-built off-site by volunteers using burnt-wood cladding and Japanese carpentry techniques, the structure was brought to its current location on a trailer bed and connected to a composting septic system and an underground heating unit that generates surplus electricity
for the hosts’ house. Called IMBY—In My Backyard, the dwelling was installed in the garden last summer by members of Quatorze. Next year, the family in Montreuil will decide whether to host a new couple, buy the house for their own use, or have it moved to another site.

A similar experiment is happening in Berlin, at an educational and social gathering place called Die Gärtnerei (Nursery), conceived by the architecture collective Raumlabor and located on the property of a stonemason’s house set back from Hermannstrasse in Neukölln. Since the height of the refugee crisis, arts educators going by the name Schlesische27 have hosted planting, landscaping, and German classes there in an effort to build community with immigrants. Like many of the unexpected spaces created by architecture collectives in Germany and France, the Nursery exudes the optimism of a place that exists only through the efforts of the people who use it. Raumlabor, Quatorze, and other associations combine ad hoc public art with social research and architectural fabrication to create structures that alter relationships between groups of people. For the architects as much as for the communities they set out to serve, collaborative work is a means of self-determination: in a slow-growing economy with a depressed labor market, architecture collectives create their own possibilities instead of waiting for someone to hire them. Whether whimsical or utilitarian, their projects invest public space with a dynamic potential for small-scale change.

Last year in Bobigny, just north of Paris, the experimental group Bellastock convened about fifty architecture collectives at its second Superville festival of temporary construction, hosting roundtable discussions on alternative practices, institutional connections, popular education, and various ways of making collectives sustainable. Bellastock keeps a ground-floor office at the École Nationale Supérieure d’Architecture de Paris-Belleville, where it was founded by three students in 2006. The members maintain the ideology of their alma mater, which broke from the Académie des Beaux-Arts in 1969 to develop a multidisciplinary—social, political, philosophical, and historical—approach to architecture.

Architects creating ephemeral projects in the US rarely characterize themselves as collectives; fund-raising through Kickstarter campaigns and innovation grants encourages a techno-optimist jargon of social entrepreneurship. While a faint utopian spirit still survives in Europe, collectives are declaring their orientation toward practical work. For a 2010 project at the Kunsthaus Bregenz, Raumlabor fashioned a wistful sign above their installation reading bye bye utopia, and dedicated much of the space to lectures, workshops, and laboratory discussions. The group’s mission statement is an activist riposte to the longing for utopian thought. “There was once a society that believed the future would bring better living conditions to everyone,” the collective writes. “Today only a feeling remains, half desire, half melancholy, reminiscing of those architects who wanted to live in a better society and who had dreamed of better places. . . . Here begins my work.”

The collectives frequently start as groups of friends and colleagues inspired to come together for pop-up urban interventions, later tapping into commissions for public art, urban amenities, and full-scale developments. Led by trained architects but taking on a wider range of projects, they fabricate spaces that at times resemble post-Minimalist or Process art installations conceived with a focus on the “program,” or the intended practical uses of the space. Decorative, experimental, and politically conscious, these projects summon alternate possibilities for inhabiting cities.

The surprise win of the 2015 Turner Prize by London-based Assemble drew wider attention to this phenomenon. Organizers of ephemeral gathering spaces, Assemble formed in 2010 when some friends attached hand-sewn curtains of donated fabric to an abandoned gas station rooftop converting it into a community cinema. This evolved into a seven-year collaboration involving eighteen anonymous members. Their second intervention was a project in Hackney Wick. With financial support from the nonprofit Create London, the group built Folly for a Flyover, a theater situated for nine weeks beneath an overpass. It was imagined as a spite house poking up between east- and westbound traffic. In 2014 Assemble captured a public art commission in East Glasgow. In a rough neighborhood where 51 percent of children live below the poverty line, the members transformed a weedy patch of concrete into a landscaped adventure playground. While keeping one foot in public art, they progressed to durable projects like the Bell Square Pavilion in Hounslow, London—a structure incorporating bleacher seating like that over the Times Square TKTS booth, capped with a playhouse—and an incremental plan to revive four blocks of Victorian terraces on Liverpool’s Granby Street, where they rehabilitated ten derelict houses for a ceramics studio, a greenhouse, and other community venues.

Among the most established of French collectives, Encore Heureux (Still Happy) has used ephemeral public art as a jumping-off point for a Situationist-inflected mission that extends beyond the narrow specialization of architects. Housed in the bustling and diverse Centquatre municipal cultural center in northeastern Paris, Encore Heureux—responding to Guy Debord’s call to adjust desires to present-day possibilities—aims for generosity, sustainability, and unexpected results. Founders Julien Choppin and Nicola Delon won a commission from the RATP public transport system as architecture students in 2001 for Herbes Folles (Wild Grasses). The project involved attaching lightweight aqua-colored plastic strips to the air vents at the Hôtel de Ville metro station, creating fanciful artificial fields on the street that attracted kids to play. In 2006 the French ministry of culture awarded Encore Heureux its annual prize for young architects, prodding the group into more high-profile projects: in 2015 at the Hôtel de Ville in Paris, they installed the Pavillon Circulaire, a temporary gathering space with a café and public forum, fabricated from the discarded doors of a decommissioned housing development. That same year they renovated an 1869 paper factory into 507 Fab House, a makerspace with an auditorium, a kitchen, and a room for virtual reality demonstrations. Yet working with transitional public spaces remains their calling card. Working in collaboration with social inclusion activists Aurore and the art collective La Fabrique des Impossibles, they transformed an informal marketplace beneath the Boulevard Périphérique where immigrants sell goods into an airy wood and mirror-clad space called the Passage Miroir.

Several of the participants in Bellastock’s first Superville architecture summit are no longer active, which speaks to the discrepancy between the potential of scrappy collective organizations and financial realities. Members of the collective EXYZT, famous for turning the French pavilion at the 2006 Venice Biennale into an inhabited space, branched off as an initiative called ConstructLab, a mobile architectural studio that animates dozens of exhibitions and public squares with temporary programs and activities. Quatorze, now a decade old, moved last November into a co-working space along the Passage Saint-Pierre-Amelot. Sponsored by Renault and conceived as an open innovation lab, the space—named Le Square—is meant to nourish collaborations with industrial manufacturers and corporations, which Quatorze has used for progressive interventionist projects like IMBY. This fall the group raised 20,000 euros ($23,500) through crowdfunding.

In France, the practice of urban intervention pioneered by informal collectives has prompted a series of high-profile projects funded through public-private partnerships. Earlier this year, the Plein Commune association of Paris townships commissioned Bellastock to join its Métabolisme Urbain project which rethinks the flow of resources in the entire Paris agglomeration. This spring the FAIRE competition, aiming to accelerate innovative urban projects, gave awards to twenty-five pop-ups around Paris, including an inflatable pavilion, a trampoline bridge, and scaffolding adorned with vertical gardens. At the Place de la Nation, Paris’s mayor, Anne Hidalgo, sponsored an intervention by the Coloco group, in which an army of urbanists, botanists, engineers, artists, and architects collectively ripped up sidewalks with pickaxes and landscaped them with trees and pocket parks—a “Demolition Party” that launched a wider program to reduce the space taken up by cars. In September, start-ups gathered at the Pavillon l’Arsenal to pitch proposals for the second round of Hidalgo’s Reinventing Paris competition, focused on creative transformations of thirty-four underground sites throughout the city.

Refashioning cities, generating opportunities for young people and immigrants, and responding to geo-political crises like the flow of a million refugees across Europe require robust public and private sector intervention beyond the scope of one-off experiments by small collectives, of course. These challenges demand systematic policy change and visionary leadership, guided by equitable ideals. In the wake of the refugee crisis, advisers to the German government have recommended construction of affordable housing for everyone, not just asylum seekers. Even so, architecture collectives offer something that is entirely necessary and which aesthetic avant-gardes have always provided: self-organized groups independently
fabricating communal spaces and imagining other futures.