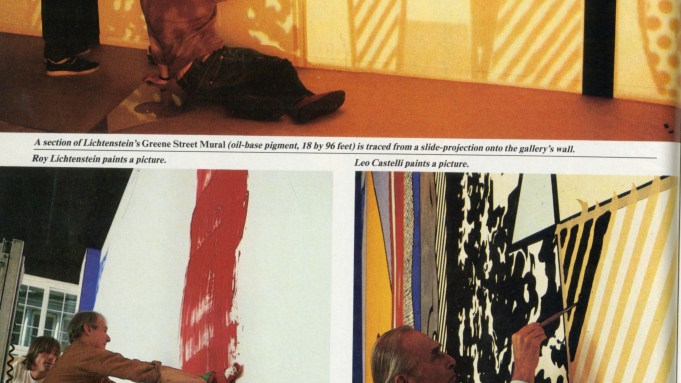 For a show at Castelli Gallery in December 1983, Pop pioneer Roy Lichtenstein produced the 96½-foot-long Greene Street Mural—named for Castelli’s SoHo address, 142 Greene Street. The monumental work brought together many of Lichtenstein’s characteristic themes in a single picture, from Ben-Day dots to Swiss cheese to figures inspired by Picasso. Per the artist’s request, the mural was destroyed at the end of the exhibition. More that 30 years later, Gagosian’s 24th Street location mounts “Roy Lichtenstein: Greene Street Mural” (Sept. 10-Oct. 17), an exhibition with a full-size replica of the mural, studies and documentation, and smaller works that Lichtenstein produced in the same era. Below is a short feature on the Greene Street Mural written by the critic and fiction writer Gary Indiana for A.i.A.’s March 1984 issue.  -Eds.

We could call it Linear B of Late Pop Art: an immense matte-textured summa doxologia in which the Ways of Paperwork are delivered unto Modernism like sliding flapjacks. Roy Lichtenstein’s Greene Street Mural has little of the come-hither-and-let­me-repel-you flirtatiousness of his early romance paintings. Here, a Picassoid sufferer of “emotional affect” (Lichtenstein’s creatures all endure “affect,” memorized from old movies) stares into the picture from a window, rather than out of it (at “Jeff,” “Brad,” or the implacable airborne Enemy). Her expression of ruffled bewilderment is a characteristic understatement.

Each of the mural’s elements is a synecdoche standing in for a whole object. Successive panels reprise the Lichtenstein canon: Art Deco, Monuments, Brushstrokes, Picture Frames, Composition Book, Modern Painting, Surrealism, Swiss Cheese, Mirrors, File Folders, Brancusi, File Cabinet, Utility Cord, Envelope, Picasso. Lichtenstein has forced a whole world through the mangle of his style; the interpenetration of its fixtures here indicates what sort of world that is. These pet objects, crammed tightly together despite the enormous space available to them, give off a negative resonance, on the same vibratory pitch as the alienated business environment of the modern art gallery. The juxtaposition of Monument and Funnel, the “gleaming” art object sitting on the “gleaming” desk next to a much more voluptuous extension cord and a sanguine roll of adding ­machine paper, the placement of a depicted spectator in an actual wall recess from which it is impossible to view the picture: Lichtenstein has defeated the implications of this imagery by making it ephemeral, transient—by the time you see the reproduction the work itself will have vanished. Though he may create “permanent” large-scale works elsewhere in future, Lichtenstein hasn’t any plans for replicating this one. Greene Street Mural is time-limited, besides being a radically cropped perspective of his total output.

The mural is the most recent entry in the postmodern genre of inventory painting that includes Warhol’s “Retrospectives” and Rivers’s “Golden Oldies.” The genre begins properly with Duchamp’s Small Valise. Whether blown up to giant size and severely edited, rendered in negative, or packed in a suitcase, the “total work” of the inventory is an effort of miniaturization, compressing the high points of the artist’s career into a tidy bundle—in preparation, presumably, for the next great leap forward. The inventory work is typically a compost of motifs, subjects, styles that the artist feels he is transcending or about to effect a dramatic mutation of. It often implies an equivocal, carnivalesque devaluation of the previous work’s emphasis, carries refutations of interpretive dissolvants plaguing the artist’s production, asserts concept over concretization.

Greene Street Mural is generic-­brand Lichtenstein, more concerned with dynamics of line and epic juggling of shapes than with attention­-narrowing seductions of color. The speed of the mural insists on an overall, flash registration. But the abrupt slicing of its images into one another echoes the physical impossibility, in the gallery, of getting far enough back from the mural to really view it “all of a piece.” Unlike inventory works of other artists, Greene Street Mural, with its emphatic temporary character, doesn’t represent an act of self­embalming. It raises a semantic problem: as I write this, the mural still exists, and has to be referred to in the present tense. “Now,” as you read this, the mural has been painted over, and this text can only refer you to a reproduction, a trace. A gestalt view of the object itself is thus excluded temporally and spatially. Greene Street Mural has as much claim to being performance art as it does to muralhood.

These giant clippings from Lichtenstein’s broadly diversified image hoard refer the viewer back to several periods in the artist’s work that have received undeservedly scant attention. Lawrence Alloway’s delightful recent book on the artist is a good place to catch up, in lieu of a retrospective. As Alloway demonstrates in a discussion of the comic-panel paintings of the early ’60s, Lichtenstein has a brilliant editorial gift. This could be seen at its terse best in the series of recent, quite small easel paintings exhibited concurrently with the mural, at Castelli’s other gallery. Each depicts parts of two framed paintings in dissimilar styles, and the sections of the walls between their frames. The collage tropes that cause these new Lichtenstein paintings to jump off the wall are spatially quite different from the borderless edge­-splicing of the mural. The paintings gradually resolve themselves into a lucid order that’s initially obscured by their surface tensions; the mural, on the other hand, produces surreal, uneven depths and shallows, like a series of photographs slapped down with their edges protruding. In either case, the immediacy is produced by elision and the speed of truncated images, which the eye automatically races over in search of completed objects.

It seems consistent with the tendentious, content-prone aspect of Pop Art that Pop artists en route to the absolutely modern trick out their itinerary with decadent, thickly embodied gestures. Andy Warhol, for instance, apparently plans to unleash a robot of himself in the near future, where a simple animated wig would suffice. In Lichtenstein’s case, plying a vast (roughly 18-by-95½-foot) surface with emblems culled from 20 years of his painting contrasts his painstaking procedure with more spontaneously generated examples of ephemerality. The “waste” issue here, from a cash standpoint, is a grosser one than dreamed of by graffiti artists (who, once ensconced in a gallery, seldom part with a laundry list for less than their latest established retail fee). Pop began by immortalizing disposable objects, so perhaps it’s fitting that it ends by disposing of its own “immortal” products. This is one, handy solution for surplus value.

Ralph Lauren Has Momentum, but Is Staying Agile

Rob Walton’s $4.65B Purchase of Broncos Approved by NFL Owners