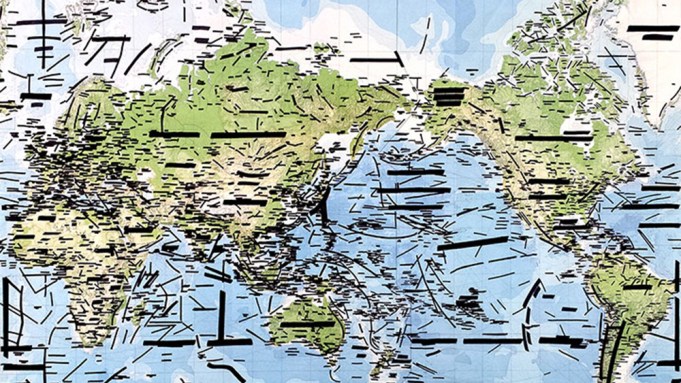 Interdisciplinary artist Jaret Vadera often juxtaposes the way individuals imagine themselves against the way others imagine them. For Vadera, the reality of identity is not static. It cannot be reduced to a political equation or an overgeneralization. His interrogation into what it means to exist beyond binary notions of identity is extremely relevant in this twenty-first-century moment of transition in the American psyche, where conversations on intersectionality abound. His navigation of this terrain will be on view in “CTRL+ALT: A Culture Lab on Imagined Futures,” presented by the Smithsonian Asian Pacific American Center this weekend. Featuring artworks, performances, and dialogues, the two-day lab takes place at the location of the former Pearl River Mart, an iconic shopping landmark in New York’s Chinatown that recently closed its doors due to rising rent.

The project, curated by Adriel Luis, Kalewa Correa, and Lawrence-Minh Bui Davis, is a follow-up to “Crosslines: A Culture Lab on Intersectionality,” held in May at the Smithsonian Arts and Industries Building in Washington, D.C., a similar presentation that addressed issues of race, gender, class, ethnicity, religion, sexuality, and disability. This iteration includes work from a racially diverse group of forty-plus artists and scholars, a significant portion of whom are of Asian descent. Vadera is showing work alongside artists such as Saya Woolfalk, Chinatown Art Brigade, and DJ Spooky, who explore imagined worlds of hybrid identities, gentrification, and experimental soundscapes, respectively. Much of the selection of work highlights and honors the forty-five-year history of Pearl River Mart, which opted out of a quarter-million-dollar rent hike last spring, and is currently exploring online retail options.

The positioning of “CTRL+ALT” as a lab—rather than, say, an exhibition or symposium—easily accommodates Vadera’s practice, which is grounded in process as opposed to product. His interests lie in community building and research-based projects in lieu of objects, questions in lieu of conclusions. To decolonize inherited notions of identity, Vadera proposes processes that involve either accepting an ambivalence toward identifying with one group or flat-out rejecting preconceived narratives of racial identity that lack nuance and complexity.

Vadera’s work for “CTRL+ALT” presents a constellation of ideas through video, photography, and sculpture. Visitors to his corner installation space encounter wall-mounted photographs with science-fiction imagery; a video monitor broadcasting live from outer space; and a mannequin posed beneath a flag representing the 300 million-year-old supercontinent Pangea. The nine works in the installation activate potential readings when considered in relationship to one another.

Boundaries and absolutes carry no currency in Vadera’s world. Some works directly disavow allegiance to the idea of nationalism. Vadera believes in cultures shared through food, language, and history—not in state-sponsored agendas. One work builds on his 2014 piece No Country, a world map with every textual reference to place (names of towns, cities, and countries) blacked out with a marker. Its next incarnation, Emperor of No Country, on view here, is a royal cloak, draped on a mannequin, composed of a similar black-marked map. Emperor of No Country and its predecessor reference the role of language in imperialism and colonization. The work is part of “Pangea,” a larger series about the constructed nature of nation-states in relation to Vadera’s fantasy narrative of ancient human history, when humans—as one species—shared a single supercontinent, and, in Vadera’s imagination, were ruled by one emperor, if any. A second piece from the “Pangea” series, A Flag for No Country, is also included in the show. It is a flag in one solid color, an amalgamation of hues from every national flag in the world.

Vadera celebrates ambivalence. In his writing and in interviews he likes to reframe the term as multivalence—a state of being that becomes comfortable for those who learn to navigate their intersectional identities on their own terms. His work inhabits a fluid field where an either/or, us-versus-them, divide-and-conquer mindset is of little value, one where new possibilities are always on the horizon and personal agency reigns supreme.

Vadera’s ability to pivot and code-switch is undoubtedly rooted in his Indian and Filipino heritage, his multicultural upbringing in Toronto, his tenure as an MFA student at Yale University, his global travels, and his participation in multiple spheres of the New York art world over the last two decades. This complex, layered existence in various social milieus offers fertile ground for envisioning possible futures, as well as exposure to the ills that plague humanity. As he aptly writes in a catalogue essay for “Double Bind: Art of the South Asian Diaspora,” a 2014 group show at New Jersey’s William Paterson University, “[Identity] is as real as death. It is as real as drones, as torture. As real as eugenics, as the prison-industrial complex. As real as money, and mobs, and votes, and the War on . . . whatever the war is on now.”