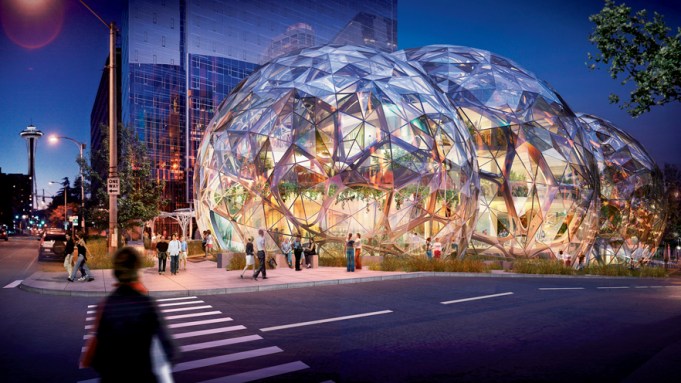 This was the beginning of an intensive collaboration between the two—a tech giant and an architectural master—that has led to the design of a new campus for Apple in Cupertino, Calif. Within three weeks of the call, Foster was on-site. There he learned about Jobs’s affection for the architecture of Stanford University (“his home territory,” Foster later noted) and about his passion for the verdant local landscape. 1 The late CEO also gave Foster a piece of motivational advice wrapped in Silicon Valley cant: “Don’t think of me as your client. Think of me as one of your team.”

Officially known as Apple Campus 2, the multibillion-dollar project is to occupy an area of 176 acres in the northeast corner of Cupertino. The ring-shaped central building, four stories high, has been nicknamed the “mothership” and “silver doughnut.” More than 2.8 million square feet in size—50 times bigger than an average American mall—it will hold up to 13,000 employees and consolidate all of Apple’s marketing, managerial, and research and development teams. The grounds are to be covered with trees, shrubs and meadows, while the rooftops will be capped with photovoltaic panels supplying clean renewable energy. Although we are talking about a building and not a consumer item, this project is arguably one of the most salient products in Jobs’s legacy. Construction will begin later this year and the first phase of the project is planned for completion in mid-2016.

Apple has resided in Cupertino for over two decades, and the decision to stay in the bayside city is considered by many to be an act of good citizenship. Still, in the current economy, the local municipality was inclined to accept most of Apple’s terms, including the request to reroute a few roads. The project raises many questions about the concept of suburban corporate campuses and their low-density, auto-dependent culture. At a time when a number of large (and small) tech companies are relocating back to cities, is Apple an outsider?

The suburban office campus became the main habitat of American corporations in the 1950s. The construction of an efficient road network in connection with the rapid development of the suburbs lured companies that wanted to escape cramped downtowns and head to expansive private grounds surrounded by the residences of white-collar workers (with their particular social mores). In this setting, companies could create a bold new corporate image by means of modern architecture.

Modeled after a generalized U.S. college campus plan, the canonical corporate development includes one or several large buildings containing offices and laboratories surrounded by acres of parking lots and pastoral landscape. Companies like General Motors, General Electric and AT&T hired leading modern architects to inject innovation into every part of the design. In the case of the Bell Labs campus (1962) in Holmdel, N.J., the architect Eero Saarinen created a technological utopia inside one of the world’s largest glass buildings.

Among the technology firms, IBM was the first to commit to an all-inclusive agenda. In 1956 it hired the designer and architect Eliot F. Noyes to reinvent its corporate image in every aspect: from graphic design to products and architecture. Noyes gathered a supergroup of designers who shared his vision for the consolidation of technology and aesthetics. Paul Rand contributed the seminal eight-bar logo (still in use today), Charles and Ray Eames masterminded IBM’s international exhibitions and Noyes himself designed the hugely successful IBM Selectric typewriter—the MacBook of the 1960s.

At the same time, the company commissioned renowned modern architects to design its various facilities around the world—at both urban and suburban sites. These include Watson Research Center in Yorktown Heights, N.Y. (Saarinen, 1961), the iconic skyscraper at 330 North Wabash in Chicago (Mies van der Rohe, 1973) and the IBM Aerospace Center in Los Angeles (Noyes, 1963), distinguished by its computer punchcard-style windows. 2

Apple has carried a similar agenda one step further, completely integrating design, technology and retail under the umbrella of an attractive corporate image. Beginning in 2001, it opened over 400 independent stores in active pedestrian locales. The most central locations, including the iconic glass box at Fifth Avenue and 59th Street in Manhattan, were designed by the American firm of Bohlin Cywinski Jackson. Many of the architectural features of the stores are now listed as original patents of Apple.

After experimenting with the small-retail landscape, Apple began to seek architectural innovation on a larger scale and to rethink its own campus. Hiring Foster, a Pritzker Prize laureate, seemed like a good bet; his London firm Foster + Partners has a successful track record of elegant, sleek and meticulously detailed buildings. Under the mask of formal and material innovation, Foster and his team have essentially embraced an approach exercised by modern empires, both political and corporate: using architecture to suggest a connection with the great empires of the past.

At Cupertino, the ringlike building echoes a history of centrally planned churches: an open courtyard planted with fruit trees replaces the church’s assembly area and personal computers set in cubicles replace the chapels. Uniformly positioned columns support both the inner and outer circumference of the structure, giving the facade a well-proportioned rhythm. The building is the epitome of symmetry, and from every angle it offers an infinite perspectival loop. Can the connections to architectural history be mere coincidence? Is Foster’s so-called mothership an alien in Western culture? Jobs was mourned after his death as if he were a pope, adding an even greater sense of importance to Apple’s building. When completed, it will be eminently visible—and recognizable—from satellites. It is both an icon and a manifesto.

Still, in spite of its iconicity, Foster’s design raises some questions about function and hierarchy. In their democratic distribution of space, circular buildings imply a nonhierarchical attitude toward power, as every point on the periphery is equidistant from the center. Here, however, the scale of the building’s long, plush corridor is unwieldy, a far cry from the incredible utility of Apple’s iPhone and MacBook products. How can you encourage physical interaction and collaboration when the circumference of your building measures an entire mile?

But the biggest misfortune of the new campus is the suburban setting. As a few critics have already noted, it resembles a contemporary version of the huge 1943 Pentagon building located outside Washington, in Arlington County, Va. The future campus will similarly be governed by vehicular transportation, demanding (and providing) 10,500 parking spots in both underground and above-ground facilities: almost one per employee. Invisible from within, the lavish California landscape that was praised repeatedly in the project’s presentation will be sealed off by walls, and the building’s exterior will be partially masked by plantings. Paradise is hidden in Cupertino.

The construction of Apple Campus 2 comes at an exciting time, as other tech companies are rethinking their corporate headquarters. Some of the new structures are slated for the suburbs. In California, Facebook recently broke ground on a suburban campus designed by the architect Frank Gehry, just across the road from the firm’s current location in Menlo Park in San Mateo County. In Mountain View, outside of San Jose, Google has begun working with the Seattle-based firm NBBJ to add more buildings to its existing campus.

Meanwhile, in Seattle, Amazon seems to be taking a more adventurous avenue. Last September it won the approval of the city of Seattle to build a 3-million-square-foot office and retail complex north of downtown. The complex will also be designed by NBBJ and is to include three office towers and three geodesic glass bubbles.

Twitter, much smaller, is likewise choosing an urban setting and lifestyle. Two years ago, the company moved to an elegant Art Deco building in downtown San Francisco.

The recent wave of corporate development implies not only the incredible growth of Silicon Valley tech companies, but a continued and now burgeoning interest on the part of those companies in architecture and urban design. It remains to be seen what kind of legacy this wave will leave on the built environment and how it will reshape the working environment in decades to come.

NOAM DVIR, former architecture critic at Haaretz newspaper in Tel Aviv, is a research assistant at the Harvard Graduate School of Design.

2. A comprehensive analysis of IBM’s design program can be found in John Harwood, The Interface: IBM and the Transformation of Corporate Design 1945-1976, Minneapolis, University of Minnesota Press, 2011.