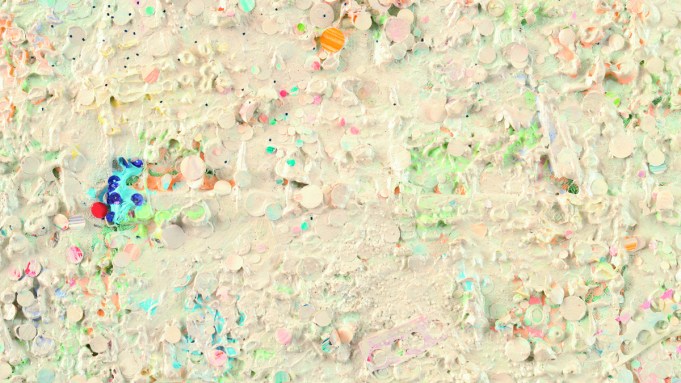 At times it seems that everything ever written about the 1970s is concerned with demonstrating just how different that decade was from the one that preceded it. At the risk of prolonging this historical cliché, I’d like to note that a lot of 1960s art in the United States, from Color Field painting to Pop art to Minimalism, favored smooth, clean surfaces, while the art of the 1970s fell in love with rough textures, especially in the medium of painting. As the decade progressed, surfaces seemed to get grittier and more irregular in the work of artists such as Larry Poons, Harmony Hammond and Ralph Humphrey, an irruption that might be said to culminate with Julian Schnabel’s first plate painting, The Patients and the Doctors (1978). Of all the artists experimenting with unevenly textured surfaces, perhaps no one did so with such nuance and intensity as Howardena Pindell.

I’ve wondered about Pindell’s 1970s paintings since being entranced by one at the Armory Show in New York several years ago. While they clearly connect to the moment of their making because of the artist’s concern with surface and her use of unstretched canvas supports—the approach has striking affinities with that of the French Supports/Surfaces movement—Pindell’s large, mixed-medium paintings are also highly distinctive by virtue of their process, their frame of reference and their visual subtlety. The exhibition “Howardena Pindell: Paintings, 1974-1980,” on view last spring at New York’s Garth Greenan Gallery, was a welcome opportunity to see the work in greater depth and to learn more about its original context.

In the early 1970s, Pindell discovered the tool that would be crucial for her work throughout the decade: the hole punch. More commonly associated with schoolrooms and offices than with artists’ studios, this simple device allowed Pindell to pursue her interest in, as she put it in a 1985 interview, “very small points of color and light,” 1 without having to rely on old-fashioned paintbrushes. At first, she used a hole punch to make stencils—from tin plates or stiff paper—through which she would spray paint onto the canvas. By mid-decade, the metal and paper circles—which this economical artist preserved-began to make their way onto the surfaces of the paintings.

After nailing a piece of canvas to the floor, Pindell would apply layers of gesso and acrylic paint, either spraying the paint on or pushing it through a stencil with a squeegee. Hundreds or even thousands of paper and metal circles, some of them punched out of the stencil she was just using, were then carefully distributed across the canvas, bonding with the wet paint. Pindell often painted the metal plates, manila folders and sheets of papers before she attacked them with a hole punch, giving the resulting disks a confetti-like look.

The paintings created in this unconventional manner bear surfaces that can suggest a lunar landscape, encrusted skins skimmed off some strange liquid or the variegated face of an ancient, much-eroded wall. Given how Pindell summons amazing effects of diffused, atmospheric color from these haptic surfaces, it’s no surprise that Claude Monet comes up in discussions of her 1970s work. In an essay for the Garth Greenan exhibition catalogue, poet/critic Barry Schwabsky eloquently notes that Pindell’s paintings “encourage the eye to overcompensate by refining its perceptions to the point where the minute differences from one moment of color to the next suddenly loom vast.” 2 Sometimes Pindell heightened the immersive qualities of her paintings by dousing them with perfume. Alas, no trace of these original scents (achieved, the artist says, with only the cheapest products) seems to have lingered into the 21st century.

As well as dispensing with the stretcher, Pindell rejected, or at least didn’t insist upon, perfect rectilinearity. Her canvases often look like she cut them relying only on hand and eye, rather than any straightedge. Many of the paintings in the recent show feature slightly curving borders and dangling threads; one has a big notch cut out of a corner. Around 1978 Pindell began cutting her canvases into thin strips, which she then sewed back together with thick carpet thread, often leaving noticeable gaps between each strip.

Pindell traces many aspects of her 1970s paintings to her discovery of African art, which began when she saw a 1972-73 exhibition of African textiles and decorative arts at New York’s Museum of Modern Art and which deepened during a two-month-long 1973 trip through Kenya, Nigeria, Ghana, Ivory Coast and Senegal. Subsequently, as she later explained, she “took the canvas off the stretcher and never put it back.” 3

Pindell was also struck by the role of accumulation in African art, in part because she had already been relying on modularity and counting in epic works like an untitled 1973 ink-on-paper collage in which she individually numbered over 20,000 punched-out paper circles and arranged them in a long horizontal grid. Perhaps the most important lesson she drew from African aesthetics was that systems don’t have to be rigid. As she noted in a 1984 review of an exhibition of African art, “Once the basic geometric formula has been established, the design may expand or contract, inhale or exhale, according to the will of the artisan or the demands of the object’s irregular shapes.”

In 1979 a pair of events contributed to a major shift in Pindell’s work. As the result of an auto accident she suffered bouts of memory loss. In order to compensate she began writing down memories on postcards she had collected and soon was incorporating photo transfers from postcards into paintings like Memory: Past (1980-81).

A second transformative event in 1979 was Pindell’s outraged response to a show at Artists Space, New York, in which a young, white male artist presented what he called “The Nigger Drawings.” Although American racism had been a subtext, evident at the time only to the artist herself, in Pindell’s hole-punch works, her involvement in protests against the Artists Space show presaged a turn in her work away from abstraction and toward figuration and autobiography. 4 As she told an interviewer in 1980, “I do work that tends to be very beautiful, very physical. . . . People who see my work now find it very soothing. I want to start confronting people with having to change their attitudes.” 5

After the revelation of Pindell’s 1970s paintings, I am impatient, as a viewer and critic, for a show documenting, with equal thoroughness and sensitivity, all the places she went next.

4. “When I was a child I was with my father in southern Ohio or northern Kentucky, and we went to a root beer stand and they gave us mugs with red circles on the bottom to designate that the glass was to be used by a person of color. I see the reason I have been obsessed with the circle, using it in a way that would be positive instead of negative.” From Pindell, “Artist’s Statement,” p. 105.