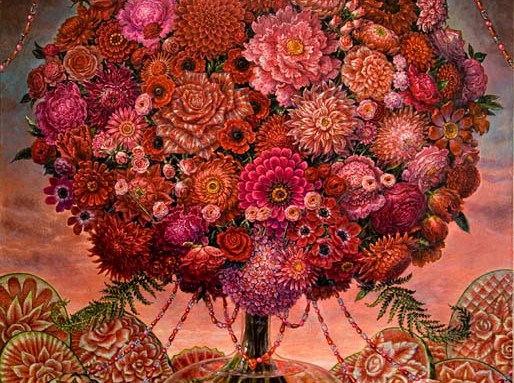 This week we check out a powerful show of Italian Renaissance portraits at the Met, read through the decades-old psychological evaluations that make up Janet Malcolm’s collages at Lori Bookstein, and get a first look at Joel Sternfeld’s never-before-exhibited color photos from the 1970s at Luhring Augustine.

Gerald Ferguson at Canada, through Feb. 12
The late Gerald Ferguson’s mixed-medium paintings come with straightforward titles that reference the non-art materials he used as stencils, such as clotheslines, ash cans, drain covers, etc. This show, of frottage canvases from 1968 through 2006, offers a rare chance to see a range of this influential artist’s work in New York.

“The Renaissance Portrait” at the Met, through Mar. 18
The good, old-fashioned blockbuster is becoming increasingly rare, with constrained budgets and fidgety international lenders. Here’s your chance to see one of the best to come down the pike—or, rather, across the seas. Power, opulence and beauty pack rooms carefully installed with paintings, drawings, busts and medallions by a truly impressive array of stars of the Italian Renaissance: among them Masaccio, the Pollaiuolo brothers, Donatello, Verrocchio, Fra Angelico, Mantegna and Botticelli, the last in enlighteningly diverse examples.

Matta at Pace, through Jan. 28
More than a dozen gigantic paintings—the largest 13 by 27 feet-by the Chilean artist known as Matta fill Pace’s 25th Street gallery on the occasion of his centennial. These late paintings, from the ’80s and ’90s, are full of richly colorful biomorphic forms that create a hazy, whirling space you can get lost in.

Joel Sternfeld at Luhring Augustine, through Feb. 4
The photos in “First Pictures” comprise four distinct series that have, for the most part, never been exhibited or published. In these buoyant images—taken during the 1970s and early ’80s at the beach in North Carolina, on the streets of New York and Chicago, and at a New Jersey shopping mall—Sternfeld began experimenting with narrative, humor and color, ideas that have remained fundamental to his work.

Danica Phelps at Brennan & Griffin, through Feb. 12
In “The Cost of Love,” Phelps turns her methodical mark-making—which uses tiny colored stripes to chronicle dollars and cents, income and outgo—to the literal cost of her recent separation from her girlfriend. The court took Phelps’s house. Each red stripe in these works represents a dollar lost in that seizure, and each work includes words from one paragraph of the court papers. It’s a heartbreaker.