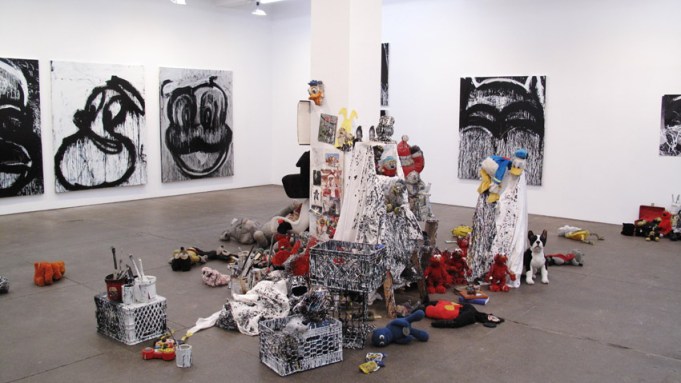 This week we check out the mostly boat- and airplane-themed images that emerged from Malcolm Morley’s foray into printmaking at Sue Scott, Joyce Pensato’s wonderfully messy studio-in-a-gallery at Friedrich Petzel, and Nick Mauss’s installation of folded and cut-out printed aluminum sculptures at 303.

Malcolm Morley at Sue Scott, through Feb. 19
Working with ace printer Maurice Sánchez, Malcolm Morley has indeed found “Another Way To Make An Image, Monotypes,” the title of this show, which features 20 recent works. With his newfound medium, Morley has managed to breathe new life into his trademark mix of war themes and pleasure scenes-grand stories told with an intimate, personal touch.

Laleh Khorramian at Nicole Klagsbrun Project, through Feb. 4
Laleh Khorramian’s 14-minute video Water Panics in the Sea is but one of five chapters exploring earth, air, fire, water and ether. It depicts the voyage of a “ghost ship time machine,” according to press materials, in a combination of digital and analog techniques that looks like little you’ve seen before. Hollywood special effects departments, take note: her creation of space is really trippy and incredibly cool.

“Corporations are People Too” at Winklemann, through Feb. 4
Corporations are people too, Mitt Romney tells us, and Winklemann gallery takes up that proposition with a show by the same name that ranges from midcentury photographs by Lewis Hine and contemporaries to lightbox images by Kota Ezawa, all of which explore our relationships with companies. The slyest piece may be by Yevgeny Fiks, who sent 100 U.S. companies a copy of Lenin’s book Imperialism: The Highest Stage of Capitalism as a gift.

Joyce Pensato at Friedrich Petzel, through Feb. 25
When Joyce Pensato was forced to vacate her Williamsburg studio last spring, she was left with a number of in-process monumental canvases and large drawings, plus a massive accumulation of found images and objects bespattered with paint. Her gallery helped her dismantle and preserve not only the objects in her studio but entire sections of walls, complete with miscellaneous, tacked-on items, the whole lot of it reconstructed at Friedrich Petzel.

Joseph Montgomery at Laurel Gitlen, through Feb. 12
Shim and wedge forms drive the varied body of work in Joseph Montgomery’s latest show, mysteriously titled “Velveteen.” His abstract, cobbled-together sculptures and paintings (some of which are based on photos of pre-existing paintings) are made up of material like cardboard, fiberglass, wax, wood, metal and gypsum.

Nick Mauss at 303, through Feb. 18
“The desire for the possibility of new images,” Nick Mauss’s second show at 303, is full of textural and tactile contradictions that keep you guessing. Spread across the gallery floor and walls are shimmery aluminum sheets, their heft and materiality challenged by the way Mauss has flung them about like sheets of paper and adorned them with silkscreens of scratchy drawings and snapshots.

“Object Fictions” at James Cohan, through Feb. 11
An investigation of “notions of perception” is a pretty vague umbrella for a group show, but that common fault is easily overlooked when the work on view is so varied and fresh. Especially engaging are Helene Appel’s trompe l’oeil paintings on raw linen of a Chopped Leek and a Puddle.

Only 3 of These Legend Edition Bugatti Veyrons Were Built. This One Could Fetch $3.3 Million.

Walmart Grows Revenues and Profits Thanks To Stronger Mix of Groceries