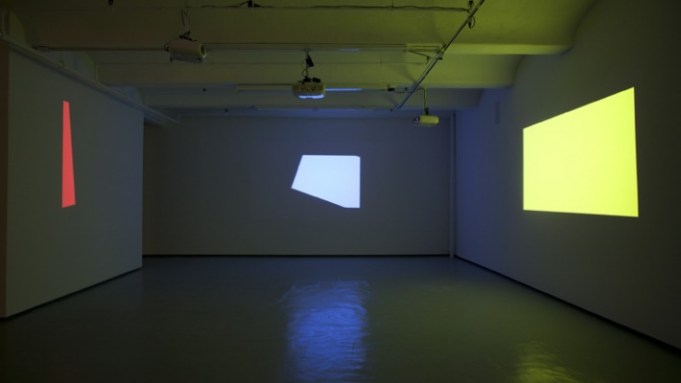 With an ever-growing number of galleries scattered around New York, it’s easy to feel overwhelmed. Where to begin? Here at A.i.A., we are always on the hunt for thought-provoking, clever and memorable shows that stand out in a crowded field. Below is a selection of shows our team of editors can’t stop talking about.

This week we check out Thomas Scheibitz’s blocky, collage-inspired compositions at Tanya Bonakdar, wander among Ross Knight’s elegantly spare sculptures at Team, and discover Japanese model/curator Mie through the eyes of 35 artists, in a group portrait show at Freight + Volume.

“Mie: A Portrait by 35 Artists” at Freight + Volume, through Feb. 25
Having posed for some 10 paintings by Alex Katz, Mie Iwatsuki—a Japanese model and independent curator based in New York—collaborated with dealer Nick Lawrence to solicit portraits of her by an additional 34 artists, ranging from Robert Frank to DJ Spooky, from New York’s David Humphrey to China’s Lin Yilin and Korea’s Min Hyung (who, in one of the show’s most imaginative leaps, depicts Itwatsuki as a male Maasai warrior in Kenya).

Ross Knight at Team, through Feb. 18
Composing his five stylish, human-scale sculptures with an equal measure of clean geometry and sensuous approximation, the New York-based artist shows a deft hand. Malleable materials such as rawhide and polyethylene are ordered by rigid steel, giving the works a wonderfully fetishistic feel, as blaring color occasionally sullies a cold, stark white.

Thomas Scheibitz at Tanya Bonakdar, through Feb. 18
Thomas Scheibitz’s compositions can look deceptively simple, like diagrams or blocky, graphic logos. The images in paintings large and small, prints, drawings, collages and a few sculptures are culled from an archive of ephemera including newspaper clippings, snapshots, magazine ads, plates from art books and historical texts.

Paul Bloodgood at Newman Popiashvili, through Feb. 11
Paul Bloodgood is known for abstract paintings made from fragments of landscapes, either his own or those of other artists. (This show helpfully includes some of the collages he uses as source material.) The newer paintings in “Object in Pieces” were completed after the artist suffered a brain injury in 2010, which prevents his mind from recognizing an object if he only sees part of it-an especially intriguing impairment given Bloodgood’s collage-based practice.

Michael Snow at Jack Shainman, through Feb. 11
Michael Snow’s show “In the Way” explores the art of looking at art. His recent and not-so-recent efforts here include a colorful light-projection installation of shifting rectangles that questions the way we perceive two-dimensional artworks. Meanwhile, a floor projection piece and an eerie holographic work overturn, in a rather disquieting way, some fundamental notions of three-dimensional space.