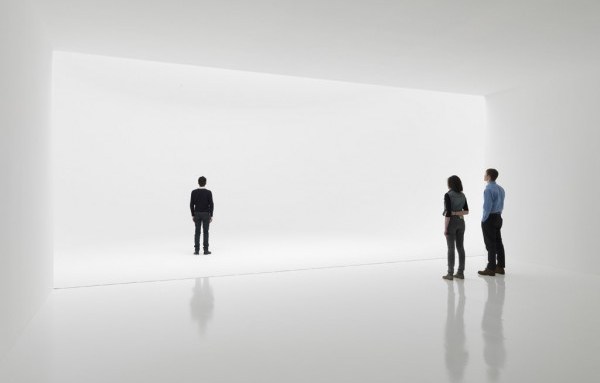 This week we check out luminous monochrome paintings by West Coast favorite Mary Corse at Lehmann Maupin, revisit the posters and billboards created by the art collective Gran Fury at NYU’s 80WSE gallery, and pay our final respects to the Christmas season via Klara Liden’s piney installation at Reena Spaulings.

Doug Wheeler at David Zwirner, through Feb. 25
Get in line—it’s worth waiting for the experience of a new installation by Light and Space pioneer Wheeler. Angles and edges disappear in the white room suffused with white light that slowly modulates to a kind of brownish twilight. Try to convince others to stand at the edge: the emptier the space, the fewer the bearings-and the greater the terror and beauty.

Klara Liden at Reena Spaulings, through Feb. 19
Swedish artist Klara Liden gathered discarded, dusty and brittle Christmas trees, some still decked with tinsel and scraps of yellow ribbon, and added a comfy leather couch to create a dense pine-scented forest you can easily lose yourself in.

Mary Corse at Lehmann Maupin, through Feb. 10
On the heels of rave reviews for her contributions to L.A.’s city-wide venture “Pacific Standard Time,” Mary Corse arrives in New York with a group of her glittering white canvases. Microspheres of glass adhered to surfaces brushed with wide white bands supply the eventfulness of these canvases, which shift from opacity to sometimes blinding reflectiveness as you cross in front of them.

Cui Xiuwen and Miao Xiaochun at Eli Klein, through Mar. 11
Along with some of her signature photographs of languid, white-clad schoolgirls, Cui Xiaochun here presents a wall of video monitors showing, in moody black and white, 22 nude individuals each stretching and swaying in spiritual reverie. Miao Xiaochun, a pioneer of conceptual photography in the PRC, continues his recent video animation experiments with two dreamlike high-tech works in which hairless, denuded, often floating figures seek to start the world anew to the strains of Beethoven’s “Missa Solemnis.”

Slater Bradley at Team, through Feb. 18
As Holden Caulfield walks the streets of New York City on his way to a nervous breakdown in Salinger’s The Catcher in the Rye, he finds himself beseeching his deceased little brother, “Allie, don’t let me disappear,” each time he’s about to step off a curb. In his excellent new video, Slater Bradley employs his longtime doppelgänger, model and actor Benjamin Brock, to represent Caulfield, wandering modern-day Midtown Manhattan. In ways funny and ominous, sound and image come together to depict a young man on the edge.

Ridley Howard at Leo Koenig, through Feb. 15
With wit, humor and charm, Brooklyn-based painter Ridley Howard manages to effortlessly cross back and forth-and in between—the treacherous borders of abstraction and figuration. Wildly diverse in terms of subject, the medium- and small-size compositions in this exhibition are united by refined technique, clarity of vision and an exalted attitude toward the mundane.

Gran Fury at 80WSE, through Mar. 17
Arriving in the midst of Occupy Wall Street and similar grassroots uprisings against oppression around the world, “Gran Fury: Read My Lips” demonstrates the political power of images, and how they served as weapons in the fight against AIDS, homophobia and sexism in the 1980s and ’90s. Having developed a distinctive and cohesive agitprop campaign that marked an era, the artist/activist collective known as Gran Fury reprinted on this occasion some of the riveting and unforgettable posters and billboards that so effectively carried their message.