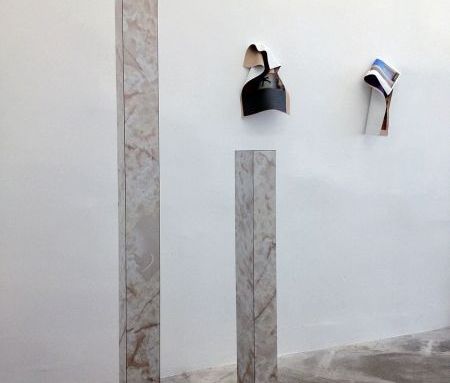 This week we check out the late Rammellzee’s “Gothic Futurist” installations at SoHo newcomer Suzanne Geiss, explore interventions by a trio of contemporary women artists in the Brooklyn Museum’s period rooms, and bid farewell to Exit Art, the pioneering alternative space closing down after three decades of innovative programming.

“Playing House” at the Brooklyn Museum, through Aug. 26
You will be challenged to find these installations by Betty Woodman, Anne Chu, Ann Agee and Mary Lucier in the museum’s period rooms. Chu’s birds, flowers and one small mountain, of cloth, ceramic and wire, look thoroughly at home; Lucier meditates on her Huguenot forbears in objects and video projections; Woodman provides some anachronistic decorations; Agee ambitiously transforms a library by adding her own scenic wallpaper, vernacular figurines and surreal-looking objects.

A. K. Burns at Callicoon, through Apr. 21
Combining feminism and formalism, A.K. Burns’s show “pregnant patron penny pot” sets off labial-shaped wall sculptures and rigid, rectilinear floor pieces to comic and thought-provoking effect. N.B.: You are allowed to lift the drapes of the wall pieces to look at the photographs printed on the canvas. Check out, for example, the punning work In Labor, with photographs of striking workers.

Douglas Huebler at Paula Cooper, through Apr. 21
“Crocodile Tears” is Paula Cooper’s first exhibition of the work of Douglas Huebler, whose estate the gallery now represents. The show includes photographs, storyboards and comic strips that derive from a screenplay Huebler worked on between 1979 and ’81 concerning the exploits of Jason James, a fictional performance artist willing to carry out death-defying stunts in order to fund his utopian arts organization.

Rammellzee at Suzanne Geiss, through Apr. 21
This SoHo gallery’s inaugural exhibition is a stunning tribute to Rammellzee, the late graffiti artist, musician and pioneering rapper, who died in 2010 at age 49. This, his first posthumous solo show, contains The Letter Racers, an elaborate installation of some 52 mechanized skateboard constructions suspended from the ceiling, plus a selection of his calligraphic Day-Glo paintings and kinetic sculptures that seem as aggressive and prescient as ever.

“Every Exit is an Entrance: 30 Years of Exit Art” at Exit Art, through May 19
Founded in a Canal Street loft in 1982, Exit Art–the alternative exhibition space jointly curated by spouses Jeanette Ingberman and Papo Colo–went on to three subsequent venues and three decades of highly innovative programming. The art-as-life project attracted a dazzling array of artists early in their careers, among them Vito Acconci, Nicole Eisenman, Cindy Sherman and David Wojnarowicz. Ingberman died last year, and this retrospective group exhibition, which includes documentary material as well as works by some of these artists and others, is Exit Art’s final show-and the end of an era.

Lebbeus Woods at Friedman Benda, through Apr. 6
In the mid-1980s, architect Lebbeus Woods was teaching at Cooper Union and spending more time drawing mythic, imaginary buildings than designing real ones. Friedman Benda’s show includes more than 100 drawings from this period, featuring the inhabited ruins of refineries, bulging towers covered with steel plates, and a landscape of shifting planes that swirl up into gangplanks and gestural lines.

Peter Dudek and Peter Soriano at Ventana 244, through Apr. 1
In this two-person show, the works of Peter Dudek and Peter Soriano are distinct, yet fit together seamlessly. This makes sense, since they worked together in Soriano’s studio for the last several months while preparing for the exhibition. Soriano’s spray-paint-and-pipe wall pieces play off of Dudek’s low-lying modular constructions made up of cardboard and other everyday materials to lively and satisfying effect.