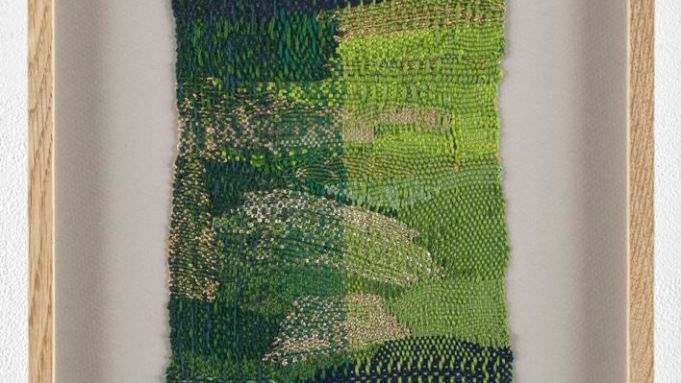 Virginia Overton at the Kitchen, through May 6
Virginia Overton’s skill lies in her ability to transform lowbrow raw materials-metal pipe, paint-splattered two-by-fours, plain wooden pedestals-into surprisingly elegant site-specific sculptural installations. Particularly arresting is Untitled (pipes), which looks like the innards of a pipe organ removed from the instrument and propped up against the wall. The gallery’s theatrical lighting casts a riot of shadows behind the piece, doubling its dramatic effect.

Jacqueline Humphries at Greene Naftali, through Apr. 28
The 11 new paintings in Jacqueline Humphries’s latest show fully embrace the metallic silver paint that she’s become known for. (Humphries mixes the pigment herself, achieving a lush iridescent color that looks like smoothed-out tin foil.) Some are nearly all silver with splotches of black, while others break apart where hints of orange, pink, green or blue peek out from behind the shimmery surface, as if the silvery top layer has been scratched away to reveal the colorful abstraction lurking beneath.

Sylvan Lionni at Kansas, through May 12
Taking as his subjects mundane objects viewed over the course of an ordinary day—actual colored laundry bags, paintings of an op-pattern shower curtain, a generic bodega sign for flowers, slightly crumpled computer print-out paper and colored, gridded printer tests—Sylvan Lionni infuses them with minimalist elegance.  The paintings, produced in a variety of cool methods on materials like aluminum and Sintra, are so beautifully crafted they take your breath away, lending dignity to a world overrun by consumerist blight.

Ernesto Neto at Tanya Bonakdar, through May 25
Over the past couple of years, Ernesto Neto has moved way from his signature sculptural environments made out of stockinglike material into using crocheted cord forms filled with plastic balls (about the same size as those found in a ball pit). Here both floors feature his colorful, immersive hanging sculptures, some of which you can walk through; several incorporate aromatic seed pods, potted plants, and spices like pepper, turmeric, cumin and cloves.

Sheila Hicks at Sikkema Jenkins, through May 25
For her first show at Sikkema Jenkins, the Paris-based American artist Sheila Hicks shows a range of textile pieces from throughout her five-decade career. There’s a human-scale sculpture that looks like a Nick Cave sound suit made for Cousin Itt (Menhir, 1998-2004) and many intricately woven wall-mounted compositions. But the most irresistibly tactile pieces in the show are the small framed swatches, made with materials like silk, metallic thread, handmade paper, quills and feathers, that Hicks calls her “Mini-Mes.”

Antonio Santin at Marc Straus, through May 6
Thirty-four-year-old Spaniard Antonio Santin makes his U.S. debut with this show of a dozen large-scale figurative oil paintings. These works, with sensuous surfaces and evocative imagery—mostly centered on a single female figure—contain more than a hint of S&M. Trained as a sculptor, the Spanish-born Santin achieves a strong sense of illusionistic depth in each composition. Examples from two recent series are on view: one features a figure under a rug, hinting at a crime scene cover-up; the other shows a full-length portraitlike study of a beautiful young woman.