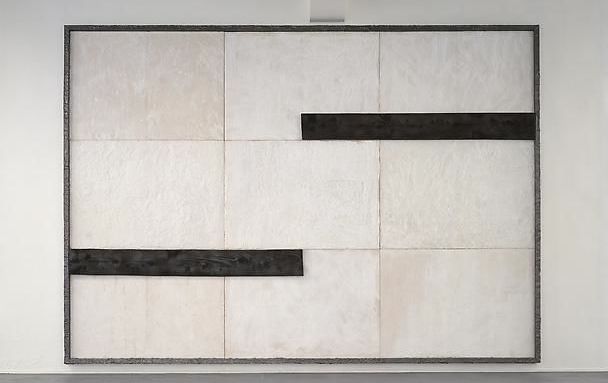 Charles Long at Madison Square Park, through Sept. 9
The latest project by the Madison Square Park Conservancy, Pet Sounds, may be one of its best ever: singing biomorphic pods by Charles Long, some free-standing, others “seated” on benches, all connected by candy-colored rails. Touching them magically activates the music generated from within, a loopy soundscape in which the Beach Boys contribute only in the most abstract way. This one is really fun: bring the kids.

Lino Tagliapietra at Heller Gallery, through May 12
For those who have not yet been seduced by the glass objects of Murano maestro Lino Tagliapietra, this survey of recent works, “The Colors of Burano,” will do the trick. Tagliapietra is perhaps best known in the U.S. as Dale Chihuly’s collaborator on some of the latter’s more outlandish pieces. This exhibition, however, highlights the Italian artist’s unique and awe-inspiring technical command of the medium as well as his own rather novel experiments with sculptural form.

Taryn Simon at MoMA, through Sept. 3
For her latest series, Taryn Simon spent four years traveling and researching the lineages of 18 people (and one animal) all over the world, from a Kenyan medicine man, to an Indian man mistakenly declared dead, to an Australian rabbit purposely infected with a deadly disease. Her fascinating show features nine of these “chapters,” presented in three framed panels: on the left are passport photo-style portraits of the original subject and his or her descendents; in the middle is a list of each person, their birth year and city of residence; and the right includes “footnotes” (snapshots, articles, evidence, etc.) relating to Simon’s exhaustive research.

Robert Irwin at Pace, through June 23
Gracefully installed with Robert Irwin’s latest highly polished panels, Pace’s uptown gallery provides an elegant environment in which to experience the venerable Light and Space artist’s recent work. In addition to the five painted aluminum panels, there’s a somewhat out of place neon wall sculpture and an acrylic panel with two cut-outs installed in the window overlooking 57th Street.

Pier Paolo Calzolari at Marianne Boesky and Pace, through June 2
In order to accommodate an ambitious 25-year survey of Pier Paolo Calzolari’s sculptures and installations, the galleries—Boesky, who represents the arte povera artist, on 24th Street, and her back-end neighbor, Pace, on 25th-arranged to break through their back walls, creating a short passageway connecting the two spaces. Most of Calzolari’s large-scale works incorporate organic materials like salt, charred wood and moss; many are hooked up to refrigerator motors to provide a constant layer of frost; one piece is made up of a large slab of lead set in a fish tank with a single forlorn-looking koi.

Ryan McGinley at Team Gallery, through June 2
Don’t be fooled by the fame of his early pictures or his editorial work, McGinley is deeply in touch with contemporary photography. His “Animals,” willfully cute pictures of creatures obscuring human parts, reference pop and turn the body into a pedestal, while his “Grids” take on Facebook itself.