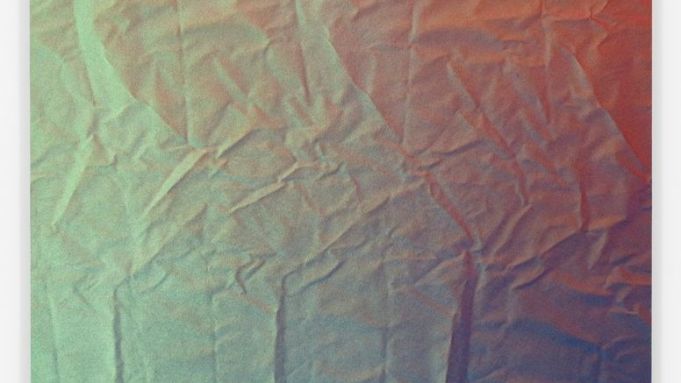 This week we check out D’Amelio’s installation of Jedediah Caesar’s latest resin panels, which look like they were excavated from a Dr. Seuss-inspired lava field; a three-gallery installation of Gilbert & George’s “London Pictures” at Sonnabend and Lehmann Maupin (Chelsea and LES); and, at Guided by Invoices, an astute take on the financial crash by former banker/current artist Carol Szymanski.

Tauba Auerbach at Paula Cooper, through June 9
Tauba Auerbach has produced a wide variety of work over the years, from graphic text paintings to digital photos of analog static to a functional two-player organ. But she remains best known for her visually tricky “Fold” paintings, whose spray-painted trompe l’oeil surfaces convincingly mimic creased canvas. For her first show at Paula Cooper, Auerbach presents half a dozen candy-colored “Fold” pieces, plus a new series of monochrome “Weave” paintings made of narrow strips of cream-colored fabric and, most unexpectedly, Onyx, a booklike sculpture in which each page reproduces an image taken from the interior of a block of onyx.

Domenico Gnoli at Luxembourg & Dayan, through June 30
A rare chance to see 18 marvelous canvases and a group of drawings by this little-known Italian painter, who died in 1970 at the age of 36. Each is a hypnotically enlarged detail of a mundane object—a collar, a bodice, a head of hair—rendered in a textured acrylic. Gnoli had a knack for making bourgeois elegance surreal.

Dana Schutz at Friedrich Petzel, through June 16
Dana Schutz’s first show at Petzel is a transitional one. Her canvases show off her painterly finesse, with evocative color and provocative distortions of figure-ground relationships; some of the best works are Hop and Ear on Fire. However, there are others that seem a bit dashed off, like Flasher and Falling Cat 2, where the artist misses the mark as she reaches toward pure abstraction. Nevertheless, a somewhat uneven exhibition by Schutz is still a cut above what most painters today have to offer.

Jedediah Caesar at D’Amelio, through June 22
Los Angeles-based sculptor Jedediah Caesar has been experimenting with his signature process-fossilizing nearly unidentifiable found objects into slabs of colored resin-for nearly a decade. Caesar usually sets his murky panels side by side on the gallery floor, so it’s difficult to get up as close as you’d like. But this show includes a few larger pieces hung on the wall, where you can pick out fragments that look like pieces of a pencil, cigarette butts, bits of metal and burlap scraps encased in the swirly material.

Gilbert & George at Sonnabend and Lehmann Maupin, through June 23
Using text appropriated from newspaper and tabloid headlines, plus a spare palette of black, white and red, the ever-dynamic British duo present a striking new series of multi-panel photo pieces spread out across several New York galleries. The works cumulatively reflect the wacky preoccupations and gut-wrenching anxiety of our times. Against a background of digitally manipulated self-portraits, a key word in each panel—such as “guns,” “murder,” “rape” or “bomb”—is highlighted in red to give the image an extra sense of urgency.

Carol Szymanski at Guided by Invoices, through May 26
While many have opinions about the recent financial meltdown, few have a real insider’s knowledge. Carol Szymanski was a high-level banker when it all came crashing down in 2007-08; also a longtime conceptual artist whose subject is language, she maintained her sanity via an e-mail project called Cockshut Dummy (ongoing), in which she sent elliptical photos and poems about what she was witnessing. These texts, all the more devastating in their iteration as fragmentary concrete poems, appear throughout the show, most strikingly printed on large, backlit, translucent sheets of vellum-but also in neons and, more tellingly, on small women’s suits, tragically crumpled.

Alisa Baremboym at 47 Canal, through May 13
They say you don’t want to know how the sausage is made, but one of the images in this show, “Abundant Delicacy,” shows the gears used to grind meat. The metaphorical sausage here is a layer of fabric laid on top of a print to create 3-D interference. Other images focus in tight on sardines and lox—preserved foods that this Russian-born artist considers to be metaphors for other kinds of preservation—and the interior of an empty meat locker.