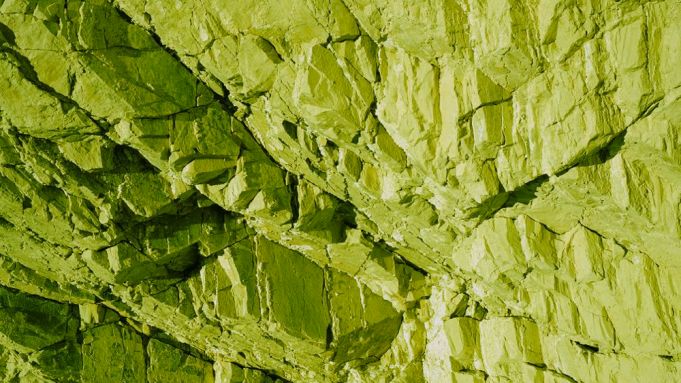 “À rebours” at Venus over Manhattan, through June 30
This tony new Upper East Side gallery has an irritating name and bills itself, in art world-speak, as a “curatorial platform.” But, in all fairness, we give its inaugural show a bunch of stars. The title of the show is taken from Huysman’s 1884 novel of fin-de-siècle decadence. Accordingly, in a suggestively dark space with spot-lit displays, we find some choice gorgeous and creepy things: “primitive” (African fetishes, though also a David Hammons mask), coital (Jeff Koons’s crystal Violet Ice), visceral (Lucas Samaras’s hypnotic food-prep video Fowl), morbid (Damien Hirst’s photo of himself With Dead Head) and downright spooky (Redon’s Head of Cyclops, Banks Violette’s fire-lit Bergen Chair)—nearly 50 works, all worth peering at.

David Benjamin Sherry at Salon94, through June 2
It’s impossible not to be reeled in by the monochrome, sherbet-hued photos spread across both of Salon94’s downtown venues. All 28 images document desert topography from National Parks in the western United States; the super-saturated, unnatural colors are achieved via Sherry’s darkroom trickery. Up close, the craggy rock faces at the Bowery gallery resemble crinkled crepe paper or molded putty; the phonograms and “sand prints” (photos covered with a layer of fine desert sand) in the Freeman Alley space are more abstract and subdued.

Tonico Lemos Auad at CRG, through June 29
In “Figa,” Tonico Lemos Auad seems to transform mundane materials like wood, brick and discarded soda cans into symbolic objects. A 6-foot-tall monumental human hand made of mortared brick gives the common Brazilian gesture for good luck (thumb protruding between pointer and middle fingers). Other works, like the silvery wall piece Reflected Archeology, require audience participation. Viewers can scratch off a layer of silver ink with coins that the artist provides, eventually uncovering an underlying photomural.

Chris Wiley at Nicelle Beauchene, through June 3
Chris Wiley’s photographs present lushly colored, expertly composed views of architectural details–a stairway and railing, a wall whose tiles have fallen off, a pilaster with peeling blue paint. The artist’s acute feeling for light and shade, texture and patina, is offset by an uncommonly good press release that accuses photography of being out to “transmute the fluid stuff of life into a clunky rattlebag of reified signs.” The theory-head language is surely wielded with humor when the photographic results are just so plain beautiful.

Anish Kapoor at Gladstone, through June 9
Only because of the reputation of Anish Kapoor do the 22 concrete sculptures at Gladstone’s 24th Street gallery seem understated. Each piece looks like a cross between a cluster of stalagmites and an overgrown drip castle, or maybe a barnacle-covered reef. You have to wonder how these forms held their shape when wet. The single piece at the 21st Street space—a gigantic, hollow, pomegranate-shaped pod made of rusted Cor-Ten steel—is more typical of Kapoor’s oeuvre.

Thomas Demand at Matthew Marks, through June 23
By now viewers are familiar with Thomas Demand’s large-scale color photos of scenes he’s constructed, life-size in his studio, entirely out of paper. His latest show includes three of these (the largest, of a control room at the Fukushima Daichi power plant post-tsunami, is almost 10 feet wide), but the real treat is a new film based on a video of a cruise ship caught in a storm. Like his photos, Demand built a full-scale paper set and spent nearly a year and a half animating the 2½-minute film: we see a tin of lemon wedges quivering behind a bar, tables and chairs rolling from side to side, and a floor scattered with potted plants, plastic silverware and a lone pink sandal.

Cindy Sherman at Metro Pictures, through June 9
Why are Cindy Sherman’s photographs so exciting? Is it the preternatural look in the eyes of these characters, who inhabit solitary, majestic landscapes as if each were the last woman on earth? Perhaps Sherman’s subject is actually the first new person, come to remake humankind in her image.