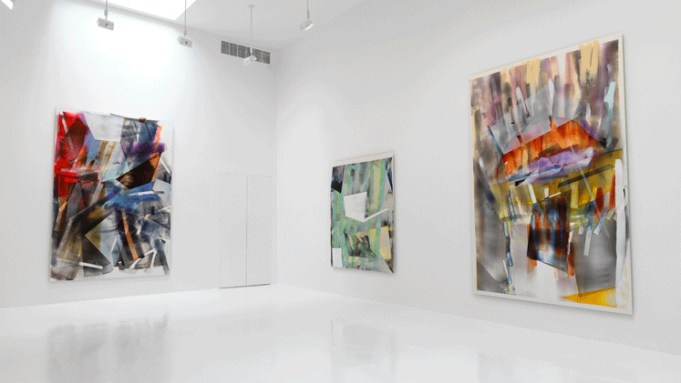 Rachel Harrison at Greene Naftali, through June 16
Rachel Harrison’s latest solo show, her first with the gallery since 2007, is worth the wait. In addition to her trademark cement-based assemblage sculptures and her customary wordplay (one of the works is called Valid Like Salad), there is a suite of drawings devoted to—wait for it—Amy Winehouse. Do the cleaning products incorporated in the sculptures relate to the show’s title, “The Help?” Only Harrison knows for sure.

Martha Rosler at Mitchell-Innes & Nash, through May 26
Last chance to see a series of photos, on view for the first time, shot by Martha Rosler in January 1981 while traveling around Cuba on a trip organized by fellow artist and Havana native Ana Mendieta and critic Lucy Lippard. Rosler’s snapshots document both indoor and outdoor spaces, from run-down cafés, nail salons and dance studios to schools, docks and vacant fields.

Steve Currie at Elizabeth Harris, through June 2
As inspiration for a large group of complex sculptures made mostly of wire and plastic tubing, Steve Currie turned to drawings he made 7–15 years ago. Amazingly, when looking at the 10-foot-tall tangled vortex of Loosestrife, a ceiling-suspended piece, or the wall-hung Pulse, with its network of wires that seem to lightly throb where interrupted by yellow tubes, one actually perceives the works as drawings in space.

Julia Rommel at Bureau, through June 10
Julia Rommel’s “Delaware” is one of those shows that you might stroll through quickly, think “Small, minimalist paintings, mostly monochrome. Check,” and amble out. But it’s intriguing to learn that after painting the canvases, Rommel removes them from their stretchers, flattens them out, and then re-stretches them. In Luke’s Novel (2012), a gray-blue monochrome, she even lets the staple holes and the creased edges show.

Kristin Baker at Suzanne Geiss, through June 23
Kristin Baker has been showing her colorful, fractured paintings, made up of layers of troweled acrylic on thin PVC panels, for several years. The large-scale works in “Illume-Mine” are as captivating as ever, but it is Baker’s smaller, 12-by-10-inch pieces, charmingly installed in white cubbyhole shelving units side by side with potted plants, or as part of a wall-hung grid, that really draw you in.

Jutta Koether at Bortolami, through June 16
Complementing her concurrent installation, The Seasons, in the Whitney Biennial, Jutta Koether has created another for Bortolami. She’s filled the entire space with terra-cotta-colored gravel that crunches underfoot and hung eight paintings that allude to Poussin’s late masterpiece, The Four Seasons. Borrowing such motifs as two figures bearing a rack of harvested grapes, a lightning bolt and temptation-themed fruits that here, grown large, double as breasts, Koether devises a curious, funny, energetic gloss with crazy-looking girls, abstract whorls, a hot palette and a contemplative seated cat who observes all the action.

Elizabeth McAlpine at Laurel Gitlen, through June 10
For her first U.S. solo show, British artist Elizabeth McAlpine, who typically presents pared-down installations incorporating film projectors and celluloid stock, experiments with handmade pinhole cameras whose forms are based on the vaulted ceilings and curved corners of the artist’s London studio. The cameras, lined with photographic paper, result in oddly-shaped abstract prints which here have been encased in stark black frames; filling out the show are prints and sculptures in similarly irregular shapes.