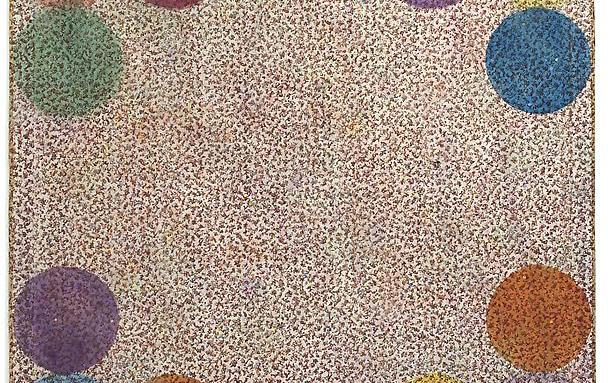 Hilary Harkness at Mary Boone, through June 25
Outstanding among the refined figurative compositions in this show are intimate scenes of Gertrude Stein and Alice B. Toklas at home, surrounded by their storied art collection. Despite the nostalgic atmosphere, Harkness engages in a spatial play that is au courant, if not futuristic.

Mary Weatherford at Brennan & Griffin, through June 19
Inspired by the interiors of caves along the California coast, Weatherford’s dreamy abstractions recall ’60s Color Field painting and feel like a bright, soothing day at the beach.

David Adamo at Untitled, through June 19
A Persian rug on the ceiling suggests an upside-down world, perhaps reflecting Adamo’s disorientation after moving from New York to Berlin. Here, the baseball bats and axe handles the artist has hacked down to toothpicks in previous works have grown to the size of bodies, caskets or canoes, many similarly whittled to perilous dimensions.

Alan Shields at Greenberg Van Doren, through June 24
The eccentric painting/sculpture hybrids that Alan Shields (1944–2005) produced in the 1970s and ’80s get better over time. “Something Goin’ On & On” features some of his most striking works of that period.

John Chamberlain at Gagosian, through July 8
The crushed-up car parts maestro, who has been exhibiting since the late 1950s, outdoes himself for his first show with Gagosian. The new, large-scale (some monumental) pieces here all live, breathe and sing.

Stephen Westfall at Lennon, Weinberg, through June 11
On his triumphant return after a year in Rome, Westfall offers a suite of geometric abstractions inspired by the tiled floors of churches in the Eternal City and environs. Be sure to sit and stare at Source until the colors start to change and vibrate and the central diamond goes all 3D on you.

Kara Walker at Sikkema Jenkins (through June 4) and Lehmann Maupin (through June 25)
Kara Walker’s latest body of work is spread out over two galleries: three new videos, including a shadow-puppet narrative exploring the contrasting stereotypes of demure Southern white women and hypersexual black men, at Lehmann Maupin, and dozens of storyboard-style graphite drawings and prints at Sikkema Jenkins.

Alexander Ross at David Nolan, through June 18
Alexander Ross’s photorealistic paintings of squishy-looking blobs and towers molded from plasticine beg to be touched. The candy-colored landscapes look like illustrations for an unwritten Dr. Seuss book.

Jesus Rafael Soto at Haunch of Venison, through July 1
Haunch of Venison’s expansive galleries are filled with Jesus Rafael Soto’s (1923–2005) mostly three-dimensional constructions. Observed straight-on, the optic sculptures seem preternaturally still, but as soon as you step to the side, the wires and hanging metal bars create an abstract, low-fi hologram effect.